OPINIONS What are US' intentions behind its initiating trade war?

What are US' intentions behind its initiating trade war?

There will be no winner in a trade war, as it will hurt export and employment of both sides involved, increase the cost of production and living of enterprises and consumers respectively, hinder regular operation of global value chain, and as a result place severely negative impacts on multilateral trading system. 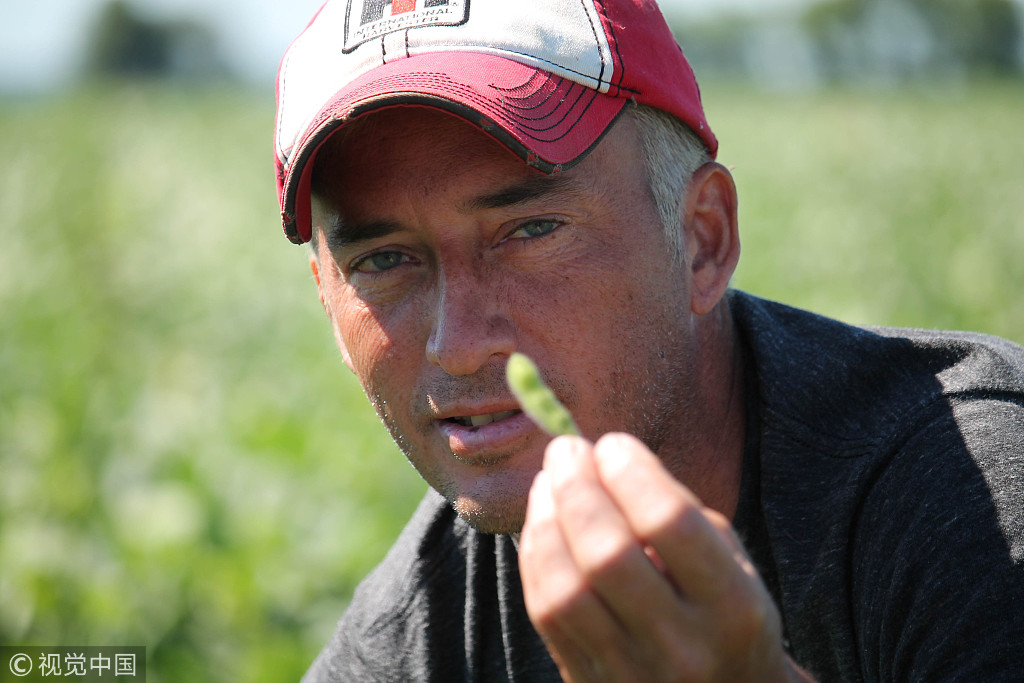 Farmer Terry Davidson displays one of his soybeans July 6, 2018, in Harvard, Illinois, the same day China imposed retaliatory tariffs aimed at the US soybean market. Davidson, 41, is a fifth generation farmer, a Democrat among mostly Republicans. He expects to be farming long after the US-China trade tariffs become a distant memory. "We've survived since the 1800s and we're still going. So, I think we'll keep going," Davidson says. (Photo: VCG)

So why did the US still initiate the trade war though the country has always been clear about the cost and loss? The complicated reasons are listed as follows.

The trade war is primarily a blackmail of the US to gain interests.

It is an old trick of the US that forces trading partners to open up markets and give up economic interests by starting or threatening to start a trade war. Such approach has been applied by the US to many countries.

They blamed China for widening income gap and other domestic problems of the US, saying “China snatched their job opportunities”.

They also attributed the US trade deficit to China’s policy, saying the US “took a beating”, ignoring the fact that the deficit was a result of its domestic structural problems such as over-low savings rate.

In recent years, the US turned itself from an advocate of free trade to a guardian of protectionism in disregard of the mandates of the World Trade Organization (WTO) for developing countries.

Distorting the “reciprocal opening-up” principle, it even unreasonably requires other countries to follow itself in tariff on each specific product and market access for foreign investment in each industry, placing developing countries in disadvantage.

The US even turns a blind eye to China’s sincerity in settling the economic and trade disputes, and breaks the consensus reached by the two sides by unilaterally initiating the trade war against China.

The direct motive is to force China to further expand its market access to the US in trade and investment, and increase the purchase of US products. By doing so, the US can obtain more economic benefits, while shifting its domestic contradictions outwards.

In addition, the US is hoping to contain China strategically through the trade war.

The US has become theleader of the western world after the World War II, and the world’s only superpower after the Cold War, due to its highly advanced technology, boosting economy, powerful military and finance.

In order to maintain its hegemony, the US has always stayed alert to the countries that could possibly catch up with itself, which can be evidenced by its previous measures taken to hinder the rise of the Soviet Union and Japan.

With China’s rapid economic development and rising overall strength, the US has altered its cognition and sentiment towards China, and redefined its ties with China.

The trade war, therefore, serves as an important means of the US to not only obtain more economic benefits, but also impedeChina’s development.

The proposed tariffs slapped by the US on $50 billion worth of Chinese exports mainly targets at China’s high-tech industry involved in the “Made in China 2025” plan. It unmasks the US intention to curb the rising Chinese technologies.

Besides, the trade war is also a way of the US to oppress the Chinese model of development.

As a matter of fact, the US is the one that has been truly implementing industrial policy since its founding.

Alexander Hamilton, the first US Secretary of the Treasury, was the initiator of protection policies of infant industries, who proposed plans to boost development of the US manufacturing industry.

While pursuing its own industrial policies, the US blames other countries’ regular practice, showing its mentality of hegemony.

On the stage of world economy, the US gave priority to domestic law rather than international law. It chooses to handle its economic and trade differences with China through unilateral measures rather than dispute settlement mechanism of the World Trade Organization (WTO), and flagrantly violates the WTO rules by imposing tariffs on imports from China.

In addition, the US has impeded the normal operation of the WTO by intentionally obstructing the appointment of new judges of the organization’s Appellate Body.

China has always stuck to its WTO commitments, abiding by the rules of the multilateral economic and trade system, and made every endeavor to promote trade and investment liberalization and facilitation.

But ignoring China’s efforts, the US even claims that China is practicing “revisionism” on international rules and challenges the US-dominated economic and trade system.

Therefore, when starting the trade war, the US gave full play to multiple battlefields such as public opinion, tariff, and science and technology, intending to stigmatize and force China to change its development model.

Obviously, driven by multiple motives, the US has no justifiable excuse to start the trade war. Its actions are not in conformity with the WTO rules, and will have a far-reaching baneful impact on the whole world.

The author, Long Guoqiang is vice-president of the Development Research Center of the State Council.