OPINIONS What Kushner's 'all in the family' meeting with Turkey means

What Kushner's 'all in the family' meeting with Turkey means 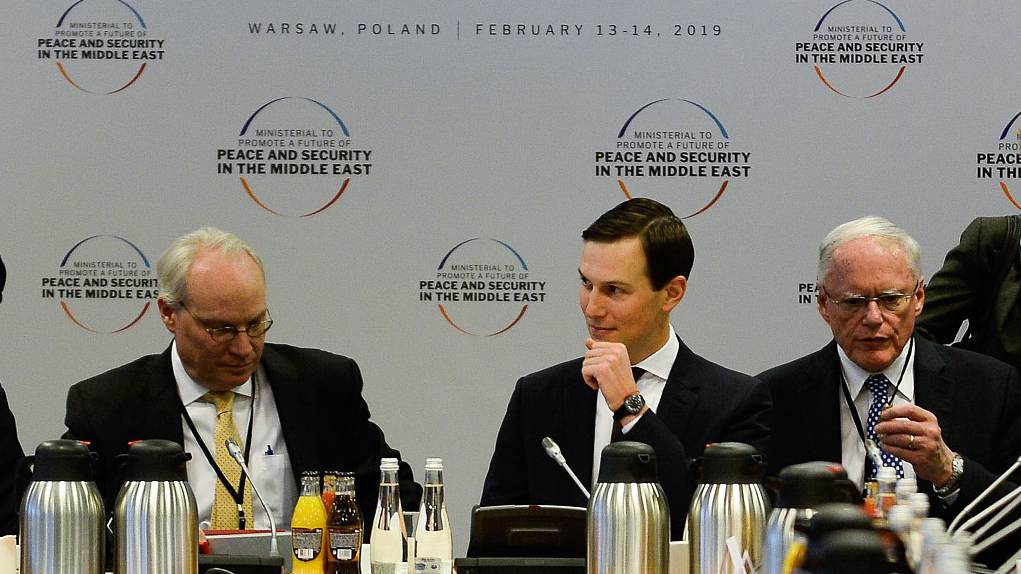 Jared Kushner, Senior Adviser to US President Donald Trump and his son-in-law during the opening of the plenary session at the Ministerial to Promote a Future of Peace and Security in the Middle East co-hosted by US and Poland in the National Stadium in Warsaw, Poland on February 14, 2019. (Photo: VCG)

During this trip, Kushner had a closed-door meeting with Turkish President Recep Tayyip Erdogan. Reportedly, Erdogan's own son-in-law, Finance Minister Berat Albayrak, was present at the meeting.

The alleged purpose of this meeting was to negotiate an Israeli-Palestinian peace plan. Considering the former's standpoints, it is difficult to picture them sitting by a negotiation table with the intention of reaching any form of consensus on this issue.

Ankara has close ties to Hamas, which is a Gaza-based faction of the Palestinian government. For a long time, President Erdogan has styled himself as a champion of Palestinian rights. He has been calling Jerusalem “a red line” and accused Israel of genocide, before the relocation of the US Embassy to Jerusalem last May.

With respect to Ankara's former grudge on the Israeli-Palestinian issue, Kushner may seem to some as a “nemesis” since he is widely believed to have led the relocation of American Embassy from Tel Aviv to Jerusalem.

It is difficult to imagine that Erdogan and Kushner would actually reach any kind of consensus on Israeli-Palestinian issues without other major factors coming in.

The expectations of Ankara

For Ankara, Washington holds more than enough bargaining chips to keep President Erdogan sitting by the negotiation table. These include Turkey's unsuccessful attempts to have the imam Fethullah Gulen, currently in Pennsylvania, US, extradited for his alleged role in masterminding of the abortive 2016 coup d'état. There is also the US reluctance to join Ankara in going after Saudi Crown Prince Mohammed bin Salman over his alleged role in the murder of Saudi journalist Jamal Khashoggi in Istanbul.

However, what really bothers Erdogan is the US's continuous support for the Syrian Kurdish People's Protection Units (YPG), who is believed by Ankara as affiliated with Kurdistan Workers' Party (PKK).

Last week, Erdogan's hatred against PKK led him, during an election rally in the town of Yozgat to say that if mayoral candidates from pro-Kurdish parties win, he would replace them with appointed trustees.

Notably, the ultimate goal of Erdogan, as he has brought up several times publicly, is a green light from Washington for Turkish forces to enter Manbij, the contested northern Syrian town where YPG militants continue to hold sway.

Last week, Mr. Kushner aired a rare interview with Sky News Arabia, supposedly to reveal the US's peace plan for the Middle East tour. Not only did the interview reveal no details of the plan, but it also incited huge dissatisfaction in Israel due to his misjudgment. Israeli news outlets questioned his intentions for this interview in the first place.

According to the interview, Kushner believes that economic factors are the major breakthrough of the Israeli-Palestinian issue. “What we have found is that all the conflict does is keep people from having the opportunity to do commerce and to have opportunity and improve their lives […] Hopefully, if we can resolve this issue, we will be able to see a lot more opportunity for the Palestinian people, for the Israeli people and the people throughout the region,” he said.

Based on the interview, Kushner will urge Erdogan to use his leverage over Hamas to help move his peace plan forward by improving the economic connection within the region.

It is very difficult to believe that, Kushner, who has been working for two years on a blueprint for President Trump, intended to resolve the decades-old dispute between Israel and the Palestinians, could not see the genesis of the gap cannot be merged by some economic boons.

The lack of transparency of Kushner's planning and the prolonged domestic distrust against his business ties with foreign leaders in the region raise a strong criticism about nepotism in the US.

Before that, Kushner was also under federal investigations concerning at least four loans his company took out from Israel's largest bank, Bank Hapoalim.

This time, the “all in the family” meeting between sons-in-law leaves windows to speculate and theorize in the US that the dominant feature in Kushner's peace plan, according to an analysis of Atlantic Council, will be "economic benefits."

Turkish Finance Minister, Berat Albayrak, was described in a Financial Times article as the “Turkish Kushner but with more power." Albayrak is the former CEO of power company Calik Holding. Erdogan appointed him as head of the Treasury and Finance Ministry last July, right after the election won Erdogan five more years in the position.

It does not come out of surprise that the “family meeting” has not worked out for Kushner, as Erdogan telephoned his counterparts in Moscow the day after the meeting. For Erdogan, regardless of the outcome, this meeting allowed him to project the image of a world leader courted by global heavyweights ahead of local elections on March 31. However, instead of worrying about the peace progress between Israel and Palestine, Mr. Kushner has his own legal cases to focus on now.