What’s behind a weaker US-Japan-SK ties 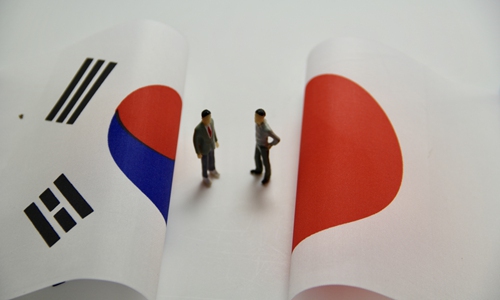 Since June, relations among the US, Japan, and South Korea have been weakening.

Starting with economic and trade cooperation, Japan has been showing the urge to integrate more intensely into Asia while keeping distance with the US. This can be seen in an uptick in ties between China and Japan as Beijing's relations with Washington become strained amid the US-launched trade war against China.

Meanwhile, South Korea and the US have seen widening differences in their policies toward North Korea. The US took Japan's side in the South Korea-Japan standoff, while continuously pressuring Seoul on extending the General Security of Military Information Agreement. In addition, Washington has also pressured Seoul to pay a huge amount of additional money for their military alliance but refused to yield full wartime operational controls to Seoul. Hence, South Korea has seen rising anti-US sentiment in political, industrial and academic circles.

There are severe divergences among the three countries in terms of multilateralism. US President Donald Trump is a fan of unilateralism and has been promoting his "America First" policy. Against the backdrop, Washington has pressured and bullied its trading partners and allies, which led to increasing geopolitical and trade pressure faced by Tokyo and Seoul. Both countries are dependent on export-oriented development. Thus, the pursuit of maximizing self-interest under the multilateral framework has become a watershed that divides the US and its two Asian allies.

Moreover, Japan and South Korea have started to pay more attention to regional cooperation to safeguard regional security in recent years. For a long time, both countries have been relying on the US for security and embracing globalization for trade. But as the Trump administration's keenness to protect its allies has decreased and it has been pressuring allies to pay more for their military alliance, Japan and South Korea are not willing to be manipulated by US Cold War mind-set any more, especially as the situation in Northeast Asia improves.

The two Northeast Asian countries now attach more importance to security cooperation inside the region and are exploring the possibility of establishing a security mechanism with China and even a trilateral one. Louder voices can be heard in Japan and South Korea asking their governments to be more independent from the US in terms of security.

In addition, the win-win economic and trade bond makes Japan and South Korea attach more importance to regional cooperation. Given that peace and development are still an unchanged theme of the world, and people's desire for better welfare and livelihood is becoming stronger, the China-promoted win-win cooperation in Northeast Asia and Asia-Pacific region attracts Japan and South Korea to integrate further with regional cooperation, in which they can bring their advantages into full play and realize sustainable development.

China, as a neighbor of both South Korea and Japan, should play a more proactive role in driving Northeast Asia's development.

China can promote the establishment of a Northeast Asian trade bloc by deepening China-Japan-South Korea multi-dimensional cooperation, build a regional community of shared future through people-to-people bonds, and help create a sense of belonging by strengthening the integration of the three Northeast Asian countries.

To achieve these goals, the three countries' governments need to promote their cooperation at both national and local levels, make full use of their common culture to mitigate misunderstandings among themselves.

The changes in US-Japan-South Korea ties reflect the two Northeast Asian countries' intentions to maintain their own strategic interests and their preference for flexible diplomacy and pragmatic cooperation. Such a choice by the two countries is rational and realistic. It is in line with China-Japan-South Korea common aspiration and goal of realizing coexistence and prosperity.