What's the trade war costing you? 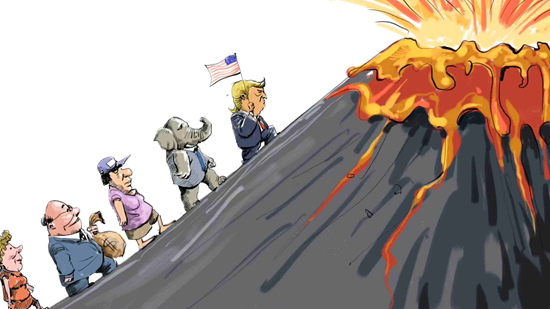 You've probably heard that Donald Trump imposed tariffs on China on July 6. You hear alarming phrases such as "trade war," and "tit-for-tat." You also see the staggering figure of 50 billion US dollars, which is the cost of items from China that Trump has just levied taxes on.

But how do all these things affect you, the average American?

Let's look at your tennis shoes. Where are they made? Chances are, there's a label with your shoe size and the words "Made in China" right below it. The American Apparel and Footwear Association says that 72 percent of shoes in the US come from China. Since a tariff is a tax on imported goods such as these shoes made in China, higher tariffs mean more expensive shoes. Over 80 shoe companies could be affected. Think of Nike, Under Armor, Payless.

Or think of your flat screen TV. Many of the little parts in it are made in China, so your fifteen-hundred-dollar technological marvel could go up to two thousand.

President Trump's plan also has some surprises. Items ranging from smart home appliances such as Google's Nest thermostats to cars from Volvo, which is now owned by the Chinese company Geely, could see price hikes as well.

Since China won't stand by while Trump does whatever he wants, it has raised tariffs on US products. The potential of a trade war over the past few months has already hit soybean farmers in the US state of Iowa, where prices for the crop have dropped to the lowest in a decade. Since China is the largest importer of American soybeans, a real trade war could result in Iowa farmers losing an estimated 624 million US dollars.

US consumers and businesses aside, a trade war wouldn't look good for Trump's "America First" strategy. Let's go back to the 1980s, when the Reagan administration tried to reduce the huge US trade deficit with Japan by raising tariffs on Japanese imports. Instead of helping American products and businesses by making products from Japan more expensive, the policy actually widened the deficit from 36 billion US dollars in 1980 to 170 billion dollars by the end of the decade.

As American wallets bleed dry, who will be left to heed the battle cry of "America First"?