OPINIONS What we can learn from Ping-Pong Diplomacy

What we can learn from Ping-Pong Diplomacy 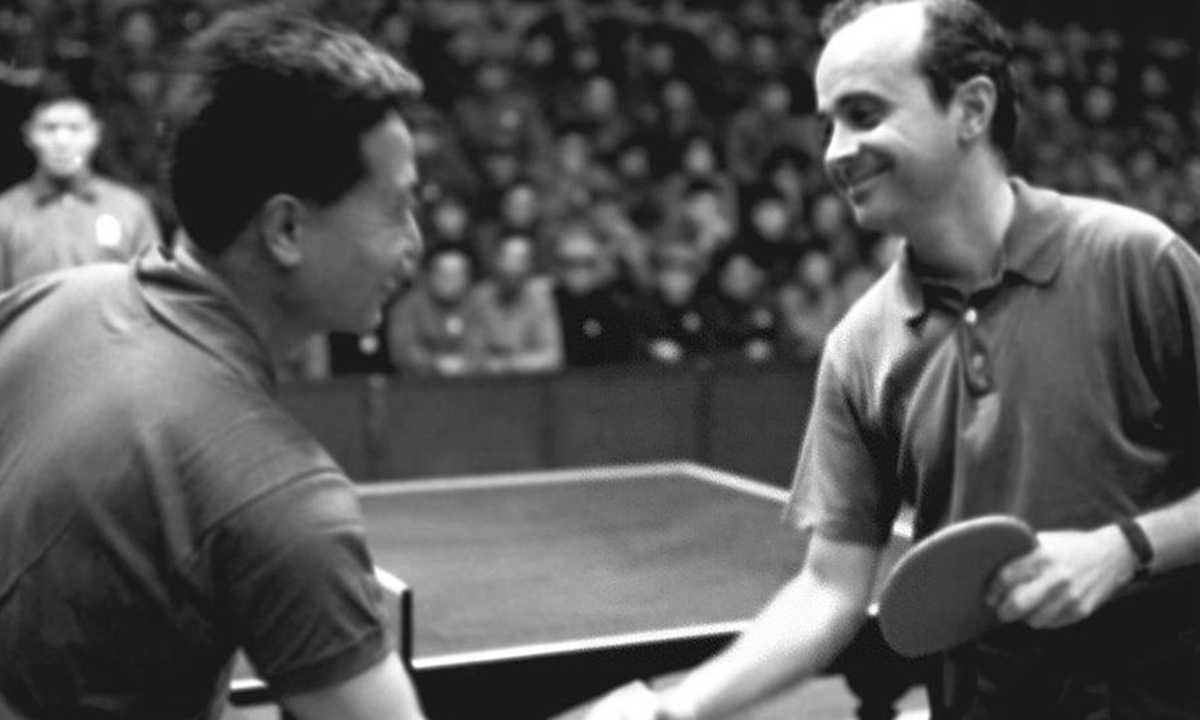 File photo taken on April 15, 1971 shows Chinese table tennis player Yang Ruihua (L) shaking hands with US athlete Dick Miles prior to a friendship match, who had met each other since the 1959 World Table Tennis Championships, in Shanghai, East China. (Photo: Xinhua)

The 50th anniversary of "Ping-Pong Diplomacy" between China and the US arrives at an apt moment for reflection. Consider the parallels between then and now. Then, as now, there was little trust, even hostility. Public opinion in each country was almost entirely negative toward the other country. Media on each side streamed calumny and unnuanced criticism.

I am afraid that US-China relations today are even worse than they were in 1971. Then, the confrontation was passive, with neither side much involved with the other. Today, the confrontation is active, given the multiple points of contact, friction, flash and potential conflict - from technology to borders to geopolitics to claimed interference in domestic affairs. Competing global narratives, spun by the US and China, tell stories of opposing political systems and divergent characterizations of human rights.

So we have work to do - those of us on both sides who believe that good US-China relations is in the best interest of the American and Chinese people and critical for the peace and prosperity of the entire world.

What can we learn from the historic success of Ping-Pong Diplomacy? Here are some principles:

• Think outside the box - don't rely on traditional ways of diplomacy alone.

• Think small - when big breakthroughs are not possible, try small ones, even if they seem insignificant.

• Explore public diplomacy - encourage people-to-people exchanges, such as in healthcare.

• Lighten up - everything need not be taken so seriously.

Now for my own story of Ping-Pong Diplomacy. It was my first trip to China in January of 1989. I was invited by the State Science and Technology Commission for a conference on reform. My guide was a bright, energetic young man named Zhu Yadan (Adam).

Adam was fluent in English and not at all intimidated by our strange group of American investment bankers. After giving my lecture (new-venture financing and entrepreneurial risk), I decided to pursue an ambition that differed from the officially mandated visits to the Beijing Opera and the Great Wall.

I wanted to play Ping-Pong with the legendary Chinese. I had played well as a child and in college, but I hadn't picked up a paddle in years. Every time I saw Adam in the Diaoyutai State Guesthouse, I beseeched him that I wanted to play Ping-Pong, and every time he replied that my schedule had been set by the authorities and no deviations were allowed. I kept bugging Adam, who tried to avoid me, not argue with me, so whenever he saw me coming, he headed off in the opposite direction. Frustrated, I ambushed him in the lobby: "If you won't take a risk to satisfy someone who has traveled 7,000 miles to help your country free of charge, there's no hope for entrepreneurship in China."

The next day, while I was attending a lecture, Adam snuck up behind me and whispered, "Wait 10 minutes, then walk slowly out the back; look for a small black car." Feeling more like a spy than a would-be Ping-Pong player, I ambled out into the parking lot, trying to appear inconspicuous. I walked over to an old car. Suddenly, the door swung open and Adam, who was crouching furtively in the back seat, pulled me into the car as though I were being kidnapped.

Off we drove to the People's University (of China), where waiting for me, to my horror, were three of China's national team players and one of the national coaches. To make matters worse, a hundred or so students had gathered to witness the Beijing debut of this American "champion."

Well, the best I can say is that I wasn't a total embarrassment. The Chinese players kindly allowed me an increasing number of points per game - five, then eight, then 11 (games were still 21 points). All the Chinese students were rooting for me, and like Rocky Balboa, I began believing in myself. I turned to the translator and said with mock menace, "Please tell my Chinese friend that in the next game I'm now going to get 13 points." To which I got a swift, smiley reply, "Please tell my American friend that he's now going to get zero points."

My opponent then announced to all that if I got three points in the next game, he would crawl under the table to shake my hand. The story ends as Rocky I did; I lost, of course, but I had my dignity. I did get those three points - one of which I actually earned - and, true to his word, under the table the Chinese national player crawled, to the unbridled delight, with applause and laughter, of the Chinese students. Adam Zhu would become my long-term business partner. Here's to more Ping-Pong Diplomacy!