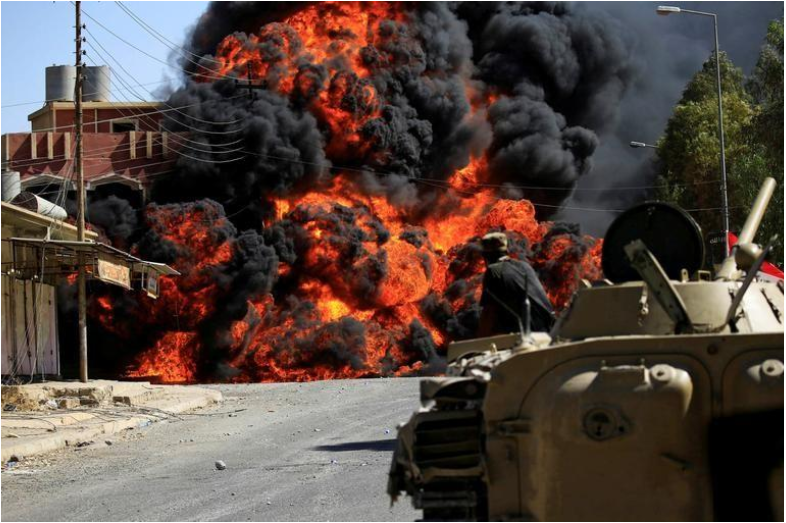 Members of the Iraqi army and the Shi'ite Popular Mobilization Forces clash with Islamic State militants in the battle to reclaim the Iraqi city of Tal Afar, August 26, 2017. Photo: REUTERS/Thaier Al-Sudani

With Islamic State in fatal decline and the edges of Kurdistan afire, the Middle East is entering a new era, dominated by the Saudi-Iranian power struggle. The United States, which did so much via its unnecessary invasion of Iraq and tragic handling of the post-incursion period to nurture the growth of Islamic State, will be largely missing from the scene. Instead, the struggle will, as it did during the fight against the Sunni extremists of Islamic State, involve shifting Sunni and Shi’ite allegiances.

For the moment, there seems to be an easing in the historic tensions between the two main – and often warring – branches of Islam. Religious differences are not the focus; this is a classic geopolitical power struggle for control of Iraq, Syria, and Kurdistan, and for expanding diplomatic and strategic reach throughout the region.

Iran is lined up to be the big winner in Syria. Islamic State's defeat will significantly lessen Sunni influence, and Tehran’s role as Syrian President Bashar al-Assad's protector will only increase now that it appears Assad will remain in control of some portion of the country. Iran will have pieced together a land corridor to the Mediterranean. The Saudis will be left with little influence.

The same goes for the United States. American forces have been largely relegated to playing traffic cop among various on-again off-again allies such as the Turks and Kurds, each with its own agenda in Syria. Any influence Washington thinks it still has is further diluted by the presence of the Russians, who are there to support Assad while maintaining a permanent presence in the heart of the Middle East. American efforts may wind up as little more than fumbling around to keep Israel and Jordan from overreacting to the increased Iranian influence on their borders.

In Saudi Arabia, meanwhile, Riyadh appears to be pivoting towards warmer relations with the Shi’ite government in Baghdad. That a Saudi airline is announcing the first return of direct service between the two countries since Saddam Hussein invaded Kuwait in 1990 is no coincidence, nor is it an isolated event.

The Saudis also appear ready to take advantage of a looming intra-Shi’ite power struggle in Baghdad among Prime Minister Haider al-Abadi, former Prime Minister Nouri al-Maliki, and Shi’ite cleric Moqtada al-Sadr. Sadr, the most religiously zealous of the group, has always been something of a nationalist and is wary of Iranian influence. It is thus not surprising he made friendly trips under official invitation to Sunni Riyadh, and the United Arab Emirates, in recent months.

Sadr is an interesting choice for the Saudis to use to gain influence in Baghdad. Real progress for Riyadh means untangling years of close Iranian cooperation in Iraq, to include limiting the power of the Iranian-backed militias. Sadr has significant influence in that respect, and can use his popularity and credibility to sell Saudi cooperation to his followers who remember Saudi funding of al Qaeda in Iraq and Islamic State over the years. Enhancing Sadr's Shi’ite religious status can further Sunni Saudi goals. During his visit, the Saudis gifted Sadr with $10 million for “rebuilding,” and also astutely threw in some visas for this year’s Hajj pilgrimage for Sadr to distribute.

The Saudis otherwise have little to work with in Iraq compared to Iran. Tehran’s ties to officials in Baghdad are just a tiny part of a deep relationship forged in the bloody fight against the American occupiers and the ousting of Islamic State. Iranian money continues to support Iraq, and the Shi’ite militias are still mostly under Iranian influence.

Iran is also probably the most stable Muslim nation in the Middle East. It has existed more or less within its current borders for thousands of years, and is largely religiously, culturally, and linguistically homogeneous (though keep an eye on the Kurdish minority.) While governed in significant part by its clerics, the country has held a series of increasingly democratic elections. And unlike the Saudi monarchs, Iran’s leaders do not rule in fear of an Islamic revolution. They already had one.

Power struggles create flashpoints, and the Saudi-Iranian fight post-Islamic State is no exception. The Saudi-Iranian proxy war in Yemen has settled into a version of World War One-style trench warfare, with neither side strong enough to win nor weak enough to lose. In an ugly form of stasis, the conflict seems likely to stay within its present borders.

The powder keg is Kurdistan. Though arguably a de facto state since 2003, after the Kurds voted formally voted for independence in a Sept. 25 referendum, Iran and the Iranian-backed government in Baghdad were pressed to make clear they will not tolerate an actual Kurdish nation. With Islamic State nearly defeated and combat-tested Shi’ite militias ready for their next tasks, Tehran and Baghdad no longer need to keep the Kurds on their side. Fighting has already broken out around Kirkuk, an oil-rich city in Iraqi Kurdistan, between forces supported by Baghdad/Tehran and Kurdish fighters – leaving a gap for the Saudis to offer financial or covert support to the Iraqi Kurds.

Saudi involvement could morph an Iraqi civil war into a new proxy struggle right on Iran’s own western border, with the possible complication of further unrest inside Iran by its Kurdish minority.

While it may seem odd to write about the changing balance of power in the Middle East largely leaving out the United States, that may well describe America’s range of options post-Islamic State.

Washington’s influence in Baghdad is limited and relations with Iran are in shambles under the Trump administration. It is highly unlikely America will join Iran to fight against Kurdish allies who helped defeat Islamic State. Nor are American troops likely to battle Iranian-led militias in support of Kurdish independence that Washington says it doesn’t really support right now.

That leaves the United States sidelined, with few options other than perhaps supporting the Saudis from afar in whatever anti-Iranian meddling they do in Iraq. A long fall from the heady days of 2003 when America was going to remake the Middle East. The victor after some 14 years of overlapping struggles? In the post-Islamic State Middle East, look for Tehran to emerge dominant.