White House floundering in search of scapegoat for botched response 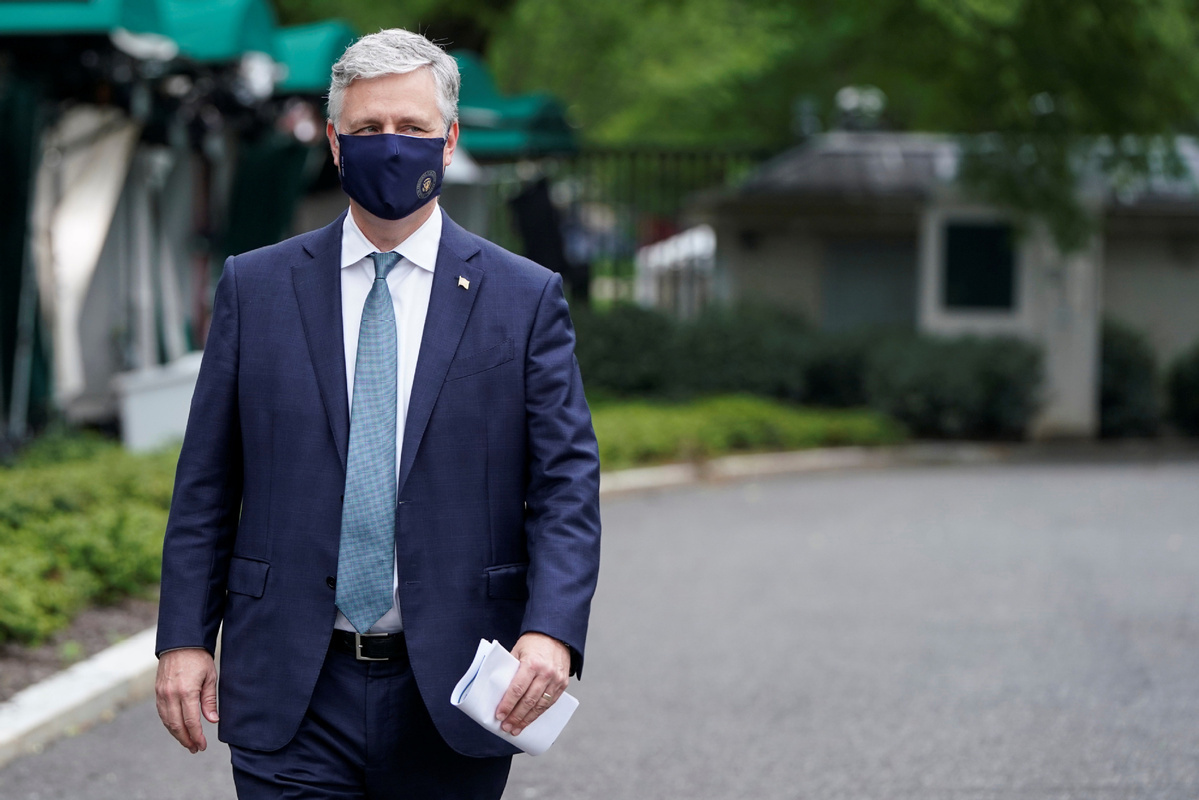 National Security Advisor Robert O'Brien walks after being interviewed at the White House in Washington, US, May 24, 2020. [Photo/Agencies]

Although he tied himself up in knots in an interview with the media on Sunday, when asked who he was alleging covered up the pandemic in China — twice saying "we don't know" — White House National Security Adviser Robert O'Brien still had the nerve to claim that "doesn't matter", because the "cover up" the White House is trying to invent is "a real problem" costing thousands of American lives.

And although he admits it has only been "reported" that China has engaged in espionage to steal US vaccine research data, the US president's security adviser alleged that China "did that" simply because it has "a many many year history" of stealing US know-how.

After hearing such tortuous logic from other senior US officials, Secretary of State Mike Pompeo for example, such gobbledygook is clearly the jargon these policymakers use to communicate with one another, even though they are supposed to be "very brilliant" as the US president recently said of Pompeo.

It is with such brilliance they are trying to rewrite the timeline of the outbreak to support their allegations. As revealed by Australian media, the US State Department has released a document which uses misleading content to cast unfounded aspersions on China's handling of the COVID-19 outbreak and it being the source.

No wonder while scientists from around the world are looking for the origin of the novel coronavirus, O'Brien asserted, as have other US senior officials, "this was a virus unleashed by China".

O'Brien failed to mention that one of his boss' first moves on entering office was to dismantle the US' pandemic prevention machinery, defunding the Centers for Disease Control and Prevention and canceling programs that were working with Chinese scientists to identify potential viruses. Or that this was done despite Bill Gates, whose foundation focuses on public health issues, warning the soon-to-be president that he should be prepared for a pandemic.

O'Brien also failed to mention that in a legally required transition exercise days before the new administration took power, members of the outgoing administration briefed it on a scenario just like the one it faces now. Or that Anthony Fauci, director of the National Institute of Allergy and Infectious Diseases and head of the White House Coronavirus Task Force, warned the president back in 2017 that the administration would be confronted with a surprise infectious disease outbreak during its term.

No wonder the US administration is desperately trying to find someone to blame for its chaotic response to the COVID-19 pandemic, since it obviously didn't pay any heed to the warnings. It is not the US administration that has been kept in the dark about such a public health threat. It is the US people.

Now the administration is scrabbling to find a scapegoat for its own hubris and ineptness. With a scattergun approach it is targeting China, the World Health Organization, the Democrats, local governors, even medical and public health professionals who refuse to speak in its own voice. Basically, anyone it thinks will convince the American people to let it off the hook.

Facing the overlapping of the upcoming presidential election, the pandemic and attendant economic difficulties and its strategic rivalry with China, it is no surprise the current US administration is doing what it can to divert attention. But that just means US lives are expendable in the administration's four-in-one strategy.