White House in Blue, Senate in Red? ‘A chance to fix China-US relations’ 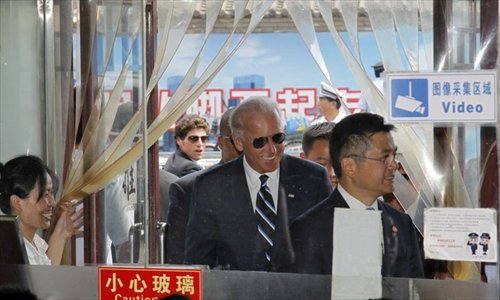 US Vice President Joseph Biden, (C) walks behind US ambassador to China Gary Locke, (R) as they arrive at a local restaurant for lunch in Beijing, China, 18 August 2011. (Photo: CFP)

The US 2020 election is very likely to conclude with the Democrats controlling the White House and the House of Representatives, and the Republicans the Senate, according to the votes so far, and this divided political situation could bring huge difficulties to the new government as struggles with the Senate will impact cabinet nominations and policymaking.

But Chinese analysts said this may bring a chance for both sides to fix China-US relations.

According to the latest data of US media, the Republicans have taken 48 seats in the Senate and are likely to seize three more seats eventually to become the majority in the Senate. But in the House, Democrats have already secured 204 seats, 14 more seats needed for them to become the majority party in the House. US media and observers predict that the trend will lead to "the White House in blue, the Senate in red and the House in blue."

AP reported that Biden has already received 264 electoral votes, and only needs six more votes to secure victory. The Nevada returns show that Biden is leading Donald Trump by about 7,600 votes. Although Trump has started to challenge the vote count in some battleground states, observers believe that it is unlikely for him to bring significant change to the result.

Liu Weidong, a research fellow at the Chinese Academy of Social Sciences' Institute of American Studies, told the Global Times on Thursday that if Biden wins the presidential election and the Democrats take the House, the chaos since the 2018 will last as the Republicans, who are likely to control the Senate, will make it harder for the Democrats to pass bills, such as the appointment of judges, or on passing international agreements.

Republicans held majorities in both the Senate and House of Representatives from 2016-2018, the first two years of Trump's presidency, and the Democrats recaptured the House in 2018.

If the GOP controls the Senate, Biden's key appointments to build his cabinet will face trouble, and the Republicans will be able to constrain Biden's domestic and foreign policies, said Yuan Zheng, deputy director of Institute of American Studies under the Chinese Academy of Social Sciences (CASS).

Although both Biden and Kamala Harris have served as senators, which may increase the room for flexibility and compromise between the two parties, partisan competition has become a part of the polarization of US politics, said Yuan. "It is not a matter of right or wrong between parties, it is not something that cannot be solved by personal relationships."

Even when the two parties split the House and Senate between 2018 and 2020, both passed anti-China bills on Hong Kong, Xinjiang and Taiwan without much resistance, said Yuan, adding it suggests that the two parties do not differ much on getting tough on China.

Lü Xiang, a research fellow on US studies at the CASS, told the Global Times on Thursday that the Congress normally has very limited influence on foreign policies, and China-US relations have already been damaged badly.

With China-US ties at their lowest point in years, any improvement will be made easily for Biden. "A more rational Democratic Party in power and control of the House would restore some room for cooperation with China on issues like climate change, public health and arms control," said Yuan, adding that Democrats could be also active on issues like arms sales to Taiwan and interference in Hong Kong and Xinjiang.