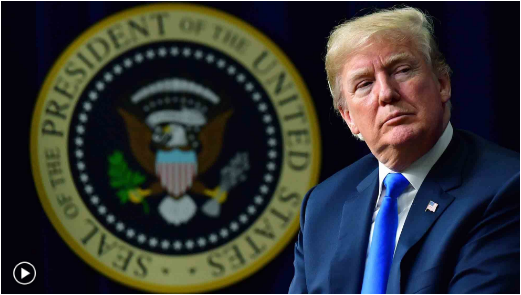 US President Donald Trump unveiled another round of tough tariffs on Chinese imports on Friday, stoking fears of a trade war between the world's two largest economies and adverse impact on the global economy which has just seen an uptick over the past few years.

The announcement, though planned in advance, still came as a stunning piece of news because the broad tariffs, standing up to 60 billion US dollars, cover a wide spectrum of Chinese products from hi-tech gadgets to apparel. As of now, the US government has imposed tariffs on various Chinese imports ranging from solar panels, washing machines, steel and aluminum products to electronics.

Before signing the package of tariffs citing an "out-of-control trade deficit," Trump had complimented China's leadership and called the country a friend. That's why many see this as an abrupt, surprising maneuver that will probably undermine the ballast of Sino-US relations.

"It is not surprising but it is also surprising. Not surprising because Mr. Trump has been talking about this during the last two, three or even more years," said Song Zhang, the Washington, DC. Bureau chief of Shanghai Wen Hui Daily at CGTN's The Heat.

He pointed out that China and the US are undergoing many discussions but the US side has no specific official to handle issues related to Chinese trade. "There is no CED at the moment, there is no coordinator from the US government to talk with the Chinese side. From the Chinese side, we have Vice Premier Mr. Liu He to be in charge of this issue. We are trying to reach kind of understanding from the US government," Song said, adding that it's surprising because China was expecting that the US would spend more weeks on negotiating about these issues before an announcement.

The business tycoon-turned president of the US wants the trade deficit with China to be reduced by 100 billion US dollars immediately, which, according to Chen Zhao – chief strategist of Alpine Macro, is totally unrealistic.

"Donald Trump has no idea of what he's talking about, to be honest. We all know, anybody who got trained in economics would understand that the trade deficit or current account deficit is a function of domestic investment and saving imbalance," he said. If the US doesn't have sufficient domestic savings, it will run the trade deficit with another country, if not China, which is a basic economic principle.

Chen Zhao, who spent 23 years at Canada-based BCA Research, also denounced the White House trade philosophy as weird and absurd. "They judge whether you are a friend or foe. Economically speaking, by looking at whether a country runs trade surplus or deficit with the United States, this is nonsense because trade brings in comparative advantage. This is a basic economic one-on-one," he noted, expressing his concern that the White House trade policy staff may plunge the US economy into a messy downward spiral.

Over the past year, the debate on fair or foul of economic globalization has intensified as an anti-globalization trend has surged across the Western world that used to spare no effort to endorse free trade. Along with it we've seen rising economic nationalism and even populism.

Trump sees trade as a zero-sum game, said Dan Ikenson, director of the Herbert A. Stiefel Center for Trade Policy Studies at the Cato Institute. The economic nationalism that the president and his advisers have brought to the table reveals that the US believes "we built the world after the Second World War, we have this security umbrella, our trading partners and others prospered under it" but later "they went out and became competitors of ourselves and took our markets."

Nonetheless, such a mentality has gradually taken root among a number of Americans, who cried for preferential treatment for having brought China and other developing countries into the international order, as they claim. But they fail to realize that there will be no winner in a trade war, as history has already proved. Mr. Trump's zeal for protectionism may fade when the US' consumer-based economy falters in his tariff move.