OPINIONS Who are really organizing the events in Hong Kong?

Who are really organizing the events in Hong Kong? 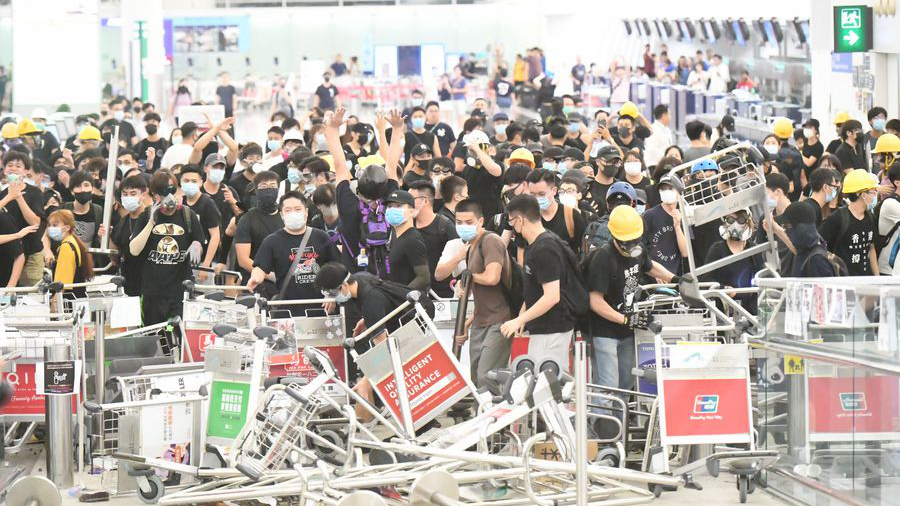 The violent protests in Hong Kong are organized and led by external forces, as is evident to anyone who has seen such operations in other countries – for example, the 2014 Euromaidan as a coup d'etat attempt in Ukraine. The claim that these violent actions are "leaderless" or "spontaneous" is completely false as any view of the protesters, who are clearly well organized and trained to deal with the police, and any examination of the political facts, shows.

The public leaders of the protests have strong links with both the US and separatists in Taiwan.

For example, Martin Lee, a long-term protest leader, has close links with the US National Endowment for Democracy (NED). The NED is funded primarily by an annual allocation from the US Congress. The NED gave Lee an award and even carried his biography on their website. In 2014 in Washington, he met with Vice President Joe Biden and Nancy Pelosi, now Speaker of the House of Representatives.

Joshua Wong, another protest leader, has close relations with high-level US anti-China circles in and also Taiwan. In 2017 he made a speaking trip to Taiwan and in June 2019 he publicly thanked political forces in Taiwan for their support for the Hong Kong protests.

In 2018, Wong visited the US where he met anti-China hawk Senator Marco Rubio on May 8. Wong received extensive praise in Time magazine, Fortune, and Foreign Policy.

In September 2017, US Senators Marco Rubio, Ben Cardin, Tom Cotton, Sherrod Brown, and Cory Gardner signed off on a letter to Wong, Law and fellow anti-China activist Alex Chow, praising them for their "efforts to build a genuinely autonomous Hong Kong." The senators proclaimed that "the United States cannot stand idly by." Rubio nominated Wong, Law, and Chow for the 2018 Nobel Peace Prize.

In August 2019, Wong, with other protest figures, was photographed meeting Julie Eadeh, the political counselor at the US Consulate General in Hong Kong, during the period the violent protests were taking place.

These close links clearly show the ludicrous character of President Trump's tweet on August 13 that he "can't imagine why" the US had been blamed for the problems going on in Hong Kong.

Behind these public figures are well-funded forces. Among the most central is the media tycoon Jimmy Lai, who has not denied his role in the protests by telling the Wall Street Journal, "I've been one of the troublemakers."

Lai, before the events in Hong Kong, was in Washington, meeting members of Trump's national security team, including National Security Advisor John Bolton. Lai is a strong supporter of President Trump – who has pursued a policy of confrontation with China. He declared that Trump "understands the Chinese like no president understood." He is a long-term bitter opponent of the Chinese government, earlier calling on Deng Xiaoping to "step down" as China's leader and he insulted China's present government by telling the Wall Street Journal about Trump, in the context of how Trump understood China and complimenting him with "I think he's very good at dealing with gangsters."

Operations by such figures are deeply cynical and damaging to those who engage in the protests. There are real issues in Hong Kong – inequality is excessive, house prices and rents are extremely high, while about 1.4 million people in a city of 7.4 million people, almost 20 percent, live below the poverty line. Responsible people, seeking a practical outcome, would seek to tackle these problems through a dialogue between China's central government and the HKSAR government.

Instead the political forces that have been described seek to drag people into violent activities, damaging Hong Kong’s economy and without the faintest chance of success. Not merely will China never accept the separatist agenda of these forces but even the US and the UK, whatever their irresponsible activities in Hong Kong, will never support any real attempt to create an "independent" Hong Kong.

In other words, such forces are creating for their own purposes a political dead end which will do lasting damage to the prosperity of Hong Kong but will also inevitably end, if violence is pursued, in long jail sentences for those who are misled into participating in such activities.