OPINIONS Who is behind the fake news of ‘discrimination’ against Africans in China?

Who is behind the fake news of ‘discrimination’ against Africans in China? 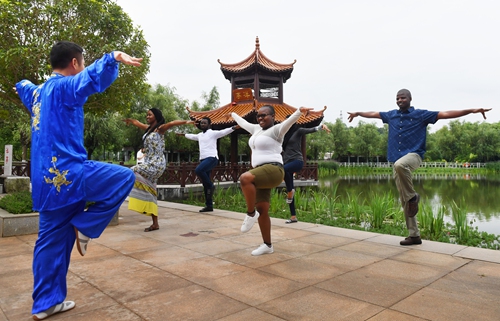 Despite being at the height of global epidemic fight, a bunch of sensational posts and one-sided stories have appeared on social media and in some Western media of what they call revelation of China's discrimination against African people.

Most of the content surrounded law enforcement in China's Guangdong Province during epidemic control over foreign residents in the city of Guangzhou, but the stories by such posts are far deviant from what really happened in the city, as city authorities have announced.

Some African media reported in recent days that Africans living in Guangzhou, capital of South China's Guangdong Province, have been badly treated and evicted from their houses when the city was in the midst of strict prevention against COVID-19.

As seeming proof of these allegations, videos of Chinese people having fights with African people in the streets of Chinese cities, Africans living in China going to the media to share their experience of discrimination, screenshots of Chinese netizens' racist comments with English translations… have all appeared on African countries' news outlets, overseas social media platforms and Western media soon after the incident in Guangzhou was reported.

Who is behind the fragmented video clips and partial stories of discrimination that have suddenly surfaced on overseas social media, especially on Twitter?

By digging into a large number of accounts that hype up the current tensions between China and African countries, the Global Times found that some African media, having been deeply influenced by biased reports from Western media, only chose to tell one-sided stories when reporting on China. Anti-government politicians in some African countries are stirring up discord over Chinese cities' anti-epidemic management; overseas anti-China groups and Hong Kong separatists are zealously leading discussions toward criticism of the Chinese government, and many zombie accounts have been created to spread fake videos to fuel the idea of "China's discrimination" against Africans.

Adding more fuel to the accusations that China was "discriminating" against Africans, a bunch of Twitter accounts registered in April and claiming to be from Africans studying in China had emerged, spreading many unconfirmed videos and rumors, the Global Times found.

One Twitter account named "A Nigerian in China" was registered in April, whose posts included claims that Chinese in Africa "rape our women, exploit our children and laugh at our men." Videos reposted by the account were sensational and misleading. For example, one video shows the hands of a person taking tubes of blood from another person, accompanied by the post: "This is what really happening in China today, pls those in medical what kind of test require this amount of blood from a person?" However, there is no any information from the video that proves the veracity of the post.

It is quite obvious that such Twitter accounts have no other purpose but to sow discord between China and African countries.

Another Twitter account, "Citizen of Nigeria," which has a similar profile photo with "A Nigerian in China," was also found to be posting fake news. For example, it posted on April 14 that one of the Chinese doctors aiding Nigeria tested positive for coronavirus and escaped from the site where he was being isolated.

However, the Global Times learned from people close to the Chinese medical team in Nigeria that the doctor is currently under quarantine and no COVID-19 infection has been reported.

Authorities in Guangzhou said the city has taken the same prevention measures for all foreigners and arranged for foreigners to undergo quarantine in designated hotels.

A number of Twitter accounts have been spreading misinformation online regardless of the reports from Guangzhou authorities.

The accounts of Hong Kong secessionists, who write the "Five Demands" on their introductions, were also found to be involved in the hyping of the incidents and trying to drive a wedge between China and African countries.

"Demosisto", an activist group established by Hong Kong separatists, including Joshua Wong Chi-fung, released posts on Twitter to hype the incident in Guangzhou. One of the posts reads "Thousands of Kenyan and African workers are now racially discriminated in Guangzhou. They are kicked out of their houses and forced to sleep on streets in chilly nights, with no food and water."

Some Western media and US politicians are also taking the idea of "China's discrimination against Africa" to a new level.

CNN and its Africa channel, as well as the Washington Post, carried some reports on the incidents in Guangzhou, using sensational pictures of people sleeping in the streets.

US politicians were also involved. "Chinese authorities must stop this abuse of Africans living and studying in China," US State Department spokeswoman Morgan Ortagus said in a tweet.

China and African countries have always supported each other, and during the pandemic the Chinese government and enterprises have donated medical supplies to the continent. However, Western media have a great influence on many media in African countries and their unbalanced China reports also affect local media's understanding of China.

A senior reporter from Nigeria's newspaper Daily Trust said that Western media are too powerful - they not only slander China on mainstream media in African countries, but also pull some celebrities to their side. They also use social media platforms, including Twitter, Facebook and Whatsapp to stir "anti-China" emotions among Africans.

When the partial news of "Kenyans being discriminated against in Guangzhou" appeared in Kenya, local media made expansive coverage of the incident, creating the hashtag "ChinaMustExplain" on social media.

Gatundu South MP Moses Kuria, a politician in Kenya, was quoted by Kenyans.co.ke as saying that all Chinese nationals should leave the country immediately. Kuria's sentiments were echoed by Narok Senator Ledama OleKina, which also drew him some followers on Twitter after many reposted his remarks and made anti-China comments.

Amid all the politicians' rhetoric, the other side of the story was missed - the authorities in Guangzhou and Chinese ambassadors in a number of African countries reiterated that equal policies are in place for both foreigners and Chinese nationals in screening for imported cases of COVID-19. Some Africans living in the city also tried to clear up the misunderstanding, saying the allegations of discrimination are not true and calling on all foreigners to abide by local prevention regulations.

Analysts said that some politicians in Kenya have a tradition of exploiting the issue of debt to China and are using local people's anxiety over the pandemic to make personal political gains and influence people's feelings toward China.

Some people in China also take the responsibility for igniting confrontations related to the Guangzhou incident.

According to a release from Sina Weibo on Wednesday, a total of 180 accounts that released contents of discrimination, were suspended. The platform also reminds users that anyone that spreads false information and stirs up racism would have their accounts shut down.

There are people in Africa who want to know more about the Guangzhou incident but are deceived by biased reports into reposting some of the fake news and videos. However, there are still many people speaking out on Twitter and in reality to share the true stories with the world. A Twitter account "Duapa Africa Group" which offers training to African students in China and releases photos of their activities in China, recently shared stories of African students in Beijing living a normal life during quarantine.

Yahyal, a Nigerian who graduated from East China University of Political Science and Law, told the Global Times that the current small rifts occurring in Guangzhou are due to misunderstandings. There are many African people doing business in Guangzhou and some of them may have overstayed their visas. During Guangzhou's epidemic prevention work, these people are worried about being found.

The current control over the epidemic in China is hard-won and should not be defeated by imported cases, Yahyal said, adding that he totally understood that China has the right to implement strict regulations to prevent the coronavirus, and urged Nigerians not to be incited by some Western media.