OPINIONS Who is Peter Navarro? His fallacy on trade and China

Who is Peter Navarro? His fallacy on trade and China 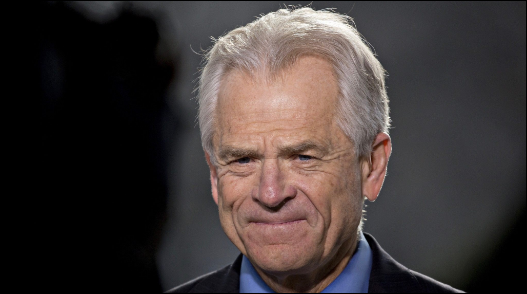 In his latest move, Donald Trump ordered the US Trade Representative to mull over hiking the proposed tariffs on 200 billion US dollars in Chinese goods to 25 percent from 10 percent. Meanwhile, the US Department of Commerce put 44 more Chinese entities on its export control list in the name of “national security.”

The exorbitant announcements took place while top officials of the two countries were reportedly trying to sit by the negotiating table to assuage the escalating trade war. But it seems that anti-China trade skeptics have again prevailed.

In the spiraling trade tensions between the world’s two economic heavy hitters, the name of Peter Navarro is ringing loud, especially in the powerful pro-establishment camp in Washington. He has been “advocating the higher duties,” says people with knowledge of the discussions, according to The New York Times.

US President Donald Trump gesticulates as he speaks during a rally in Wilkes-Barre, Pennsylvania on August 2, 2018. /VCG Photo

Who is Peter Navarro?

A Harvard-trained economist, he’s one of Trump’s top anti-China trade advisers. He currently serves as the director of Trade and Industrial Policy, the director of the newly formed White House National Trade Council.

Moreover, he is the co-author of “Death by China: Confronting the Dragon – A Global Call to Action” and director of a documentary of the same name. The work accuses China of “unfair” trade practices ranging from “currency manipulation to excessive subsidies.”

Before this controversial book in 2011, he wrote the “In The Coming China Wars: Where They Will Be Fought and How They Can Be Won” in 2006, in which he directly described “Tomorrow's China Wars” to be fought over “everything from decent jobs, livable wages, and leading-edge technologies to strategic resources such as oil, copper, and steel, even food, water, and air.”

The man is believed to be one of the backseat drivers of Trump’s aggressive China policy – and the one who has contributed to the current Beijing-Washington stalemate.

Nonetheless, what does Navarro hold onto as a longtime critic on trade and a hawk on China?

Navarro clings to an idée fixe that a trade deficit sabotages economic output, but he has “made at least one very basic mistake,” Noah Smith, an assistant professor of finance at Stony Brook University, wrote in an opinion piece for Bloomberg. He gave an opposing example from the mid-1990s when the US was running a huge trade deficit. But a big drop in the deficit “came during the Great Recession of 2009.” This shows “that trade deficits actually cause faster economic growth,” though it’s no more than a simplistic view, Smith said.

It’s quite difficult to calculate the relationship between trade deficit and economic growth. At first glance, many cheaper Chinese imports could reduce Americans’ consumption of domestically-made goods and hence lower the GDP. But a large majority of the goods – as high as 85 percent – the Trump administration has already slapped tariffs on are intermediate products, or “inputs into supply chains for domestic production.” In this way, the US manufacturing will soon feel self-inflicted pain, hurting its economic growth.

Tim Worstall, a senior fellow of the Adam Smith Institute, criticized the gadfly economist for being “alarmingly ignorant about trade” in his Forbes article as early as two years ago.

He claimed Navarro’s overarching idea that trade is a zero-sum game is “flat out wrong.” “If we do end up in a zero-sum game, where gains to one can only come from losses to another, then we would indeed be in a different political world.”

The trade guru of Trump seems to be ignorant about trade in the eyes of these Western economists. Then how could he qualify as the closest assistant to Trump, who meanwhile has doubled down on his threats against Beijing?

Actually, he owns both biased economic theories and scant knowledge about China.

He neither speaks Chinese nor visits the country often. “Navarro is not known in any China circles,” according to James McGregor, a decade-long governor of the American Chamber of Commerce in China.

Perhaps his views on trade and his views on China are intertwined. As the US’ biggest trading partner, China is also the country that has the largest trade deficit with it. He believes China to be the No.1 enemy of the United States in this all-against-all world game.

This prejudice can actually date back to the day when China gained accession into the WTO. Navarro, together with other members of the pro-establishment camp, hold that it is the US that brought China into the international economic order, but China does not play by the so-called “rules.”

Patrick Chovanec, the chief strategist at Silvercrest Asset Management, told Foreign Policy that Navarro’s books are filled with “hyperbole, inaccuracies,” and “have close to zero credibility with people who know the country.”

With Navarro being the key trade adviser to Trump, it’s nearly impossible to persuade a US leadership whose misguided assumptions are built on ignorance and prejudice. Once Trump himself feels the pinch, Navarro may likely descend as fast as he once ascended on the national political stage.