OPINIONS Why do Chinese people love the Communist Party of China so much?

Why do Chinese people love the Communist Party of China so much? 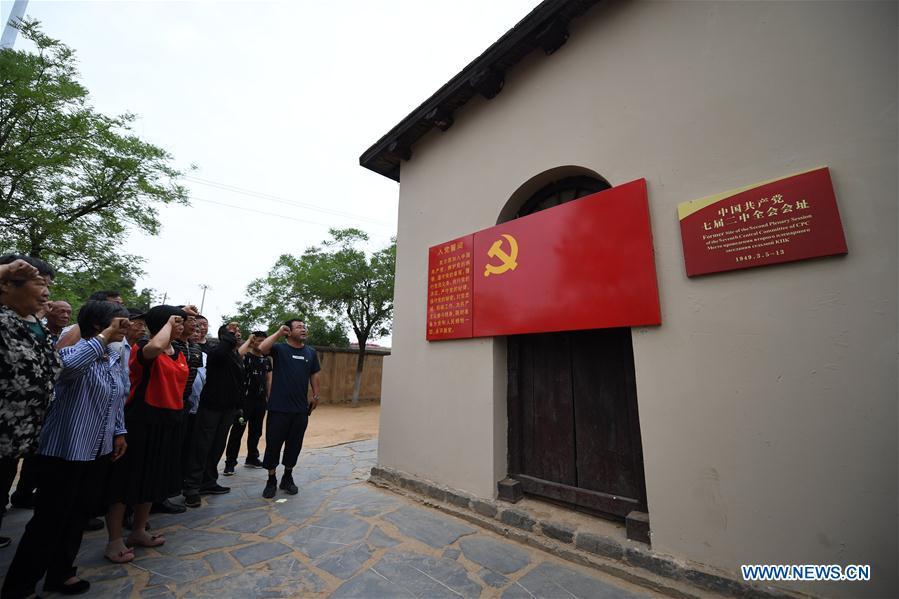 Members of the Communist Party of China (CPC) review the oath of the CPC when visiting the site of the Second Plenary Session of the 7th CPC Central Committee in Xibaipo, north China's Hebei Province, June 20, 2019. (Xinhua/Zhu Xudong)

Recently, a few American politicians, out of ideological prejudice and a Cold War mentality, attempted to ‘separate’ the Communist Party of China (CPC) from the Chinese people for ‘precision attacks’ on the CPC or create antagonism and sow discord between the two. These politicians engage in such crazy acts in explicit ignorance and stupidity mainly because they have neither the knowledge nor the ability to understand the special relationship between the Chinese people and the CPC through weal and woe, glory and shame, life and death. This article is meant to help them make up the missed lesson about why the Chinese people love the CPC so much and save them the ridiculous delusions.

First, in the nearly 100 years since its birth, the CPC has always adhered to its original intention and mission of seeking happiness for the Chinese people and rejuvenation for the Chinese nation. No matter how difficult and tortuous the path is, this has never changed and will never change! It is the fundamental reason why the CPC has grown from a few dozen members to over 93 million today and made unparalleled achievements. Unlike political parties in Western countries, the CPC conducts no ‘partisan politics.’ It has no self-interest but serves as the faithful representative of the interests and will of the Chinese people. The CPC takes the cause of the country and the people as that of its own. The CPC firmly defends the interests of the Chinese people and does not allow any special forces or groups, that abuse the people’s interest, to breed and exist in China. The CPC comes from and depends on the people. It engages and trusts the people. And it protects and serves the people. As General Secretary Xi Jinping puts it, the CPC follows a people-centred philosophy. In essence, the CPC is part of the Chinese people, and the most advanced and capable part to lead the various causes of our country. In other words, the Party and the people are inherently one and the same. If an analogy could be made between the 1.4 billion Chinese people and a human body, the CPC is appropriately its brain and soul: they cannot be separated from each other!

Second, under the CPC leadership, the Chinese people have found the development path that best suits China's national conditions, is the most conducive to solving existing problems, taps the greatest institutional advantages and generates the most benefits for the Chinese nation. It is the road of socialism with Chinese characteristics, which has already demonstrated bright prospects. In the modern times, in order for the country to become independent, rich and strong, and for the people to gain freedom and liberation, various attempts were made and failed. History has proven that only socialism can save China by ridding the country of foreign bullying and oppression and bringing it national independence and liberation, can steer the nation towards rejuvenation and a proud standing among all nations of the world, and can bring dignity and happiness to the Chinese people as masters of their country and their own destiny. Without the guidance, leadership and hard work of the CPC or the support, dedication and sacrifice of the Chinese people, it would have been impossible to find this promising path. The path has been blazed by the Chinese people led by the CPC at the price of blood. On the journey of building a better homeland and moving towards a bright future together, the mutual trust and dependence between the CPC and the Chinese people have grown deeper.

Third, bearing in mind its founding mission, the CPC and all Chinese people have persisted tirelessly and worked miracles unparalleled in human history. Under the CPC leadership, the Chinese people drove off the imperialist powers, overthrew the feudal warlords and established their own republic. The Chinese people have not only ‘stood up’ but also grown rich gradually. Now the world's second largest economy and the largest manufacturing country, China has lifted 800 million people out of poverty and will eliminate absolute poverty throughout the country by the end of this year, becoming the first developing country in the world to achieve the UN's ‘no poverty’ goal. China has put in place a universal health care system with its quality steadily improving. Average life expectancy is now over 77 years and increasing. The enrollment rate in compulsory education is close to 100%; that in higher education is more than 51%, moving towards universal coverage. The numbers of college graduates in 2019 and 2020 both exceeded 8 million. With wisdom and creativity, the Chinese people have made remarkable achievements in many fields of science and technology, some of which lead the world. China was the first to contain the unprecedented COVID-19 pandemic, minimizing the threat and harm to people's lives and health. It also leads the world to restore economic growth. These testify to the CPC’s strength, greatness and true care for the people!

Fourth, the CPC is brave in self-revolution and strong in self-purification, self-correction and self-improvement. Therefore, it has a fighting power and vitality far greater than that of political parties in Western countries, hence an infinite future. The CPC believes in seeking truth from facts, combining theory with practices and guarding against doctrinaire rigidity or rigid old ways. The CPC pursues people's democracy and accepts people's supervision with an open mind. Through unremitting political, organizational, work style, discipline and system constructions, the Party intends to stay true to its original mission and always be people-oriented, advanced and responsive to the changing times. For those among its own ranks who become degenerate or corrupt, demonstrate weakness of will or lose faith, the CPC always takes timely measures to ensure its own purity. It stresses the need to always refrain from arrogance and rashness and pay attention to learning from the strengths of others. It persists in reform and innovation and keeps forging ahead so that it keeps pace with the times in both theory and practices. Because the CPC is rooted in the people and wholeheartedly works for their well-beings with a strong enterprising spirit, it is impossible for it to not win the heartfelt support, love and trust of the Chinese people!

It is fair to say that the CPC is the great savior, guide and protector of the Chinese people while the Chinese people are the very foundation and source of strength for the survival and development of the CPC. No one can separate them!