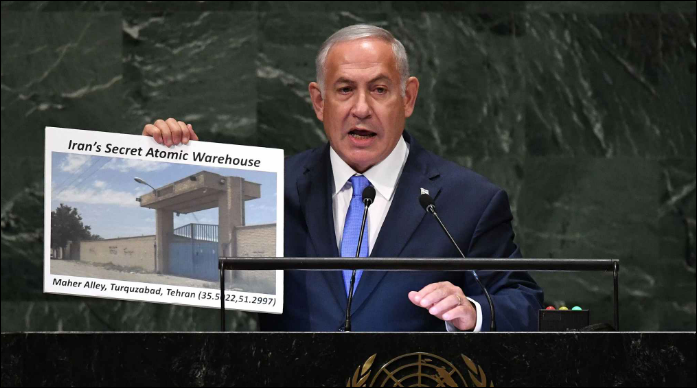 In his speech to UN general assembly in New York, Israeli Prime Minister Benjamin Netanyahu highlighted his distrust of Iran. According to Netanyahu, the Joint Comprehensive Plan of Action, or JCPOA, signed in 2015 between Iran, China, US, Russia, the EU and Germany, was a bad deal because "it fueled Iran's campaign of carnage and conquest throughout the Middle East".

Although Netanyahu comes from the "old-brand" right-wing party in Israel, Likud, and his foreign policy over Iran and other regional issues may not be welcomed by every Israeli and might be absurd for international society, it should be noted that Netanyahu's distrust against the JCPOA and belief of "Iran threat" persist among Israeli public. To understand Netanyahu, we should first understand why Israel worries about Iran's role in the Middle East.

First, Israel believes Iran has always harbored the hostility against Israel, many Israelis even believe Iran is planning to "destroy Israel". Ever since the Islamic revolution in Iran, Israel has become the "root of all evils", or the "root of all problems" in the Middle East. Iran, not only denies the existence of Israel by describing it as "Jewish authority", but also threatens to attack or destroy Israel. The most famous speech came from former Iranian President Mahmoud Ahmadinejad when he said in 2005 that Iran would "eliminate Israel from the map", and many Israeli politicians and scholars have repeatedly used Ahmadinejad's claim to certify Iran's hostile intention against Israel.

Second, Israel believes Iran still intends to develop nuclear technologies and atomic bomb, while the existing international supervision system is far from enough to reveal Iran's "nuclear ambition". According to Netanyahu, "the IAEA… has not posed a single question to Iran". Therefore, Israel believes it is highly necessary for international powers to re-design stricter monitoring system to supervise Iran's nuclear activities.

Third, Israel believes Iran has become the most imminent threat to its own security and Iran's close relations with Hamas in Gaza, Hezbollah of Lebanon and other local militant groups make Israel believe Iran's presence in the Middle East, especially in Syria, significantly threatens Israel's own security and survival. Israeli Education Minister, Naftali Bennett, once compared Iran to the "pool" that harbored "mosquitos" in the Middle East.

In spite of Israeli concerns over Iran, we should not exaggerate both Iran's nuclear intention and Iran's role in the Middle East. On the one hand, Iran's nuclear activities have been closely monitored by IAEA and the international society based on the JCPOA, it is impossible for Iran to develop its own nuclear weapons under such strict supervision system. On the other hand, Iran's rhetoric against Israel might be overestimated. Although many Iranian politicians' verbal attack on Israel are harsh, these threats are expressed in certain contexts and discourse systems in Iran and these verbal attack should not be equivalent to reality. Although Tehran and Tel Aviv have launched verbal attacks against each other for nearly four decades, peace is still maintained by these two regional powers.

Israel had initially gone along with the JCPOA in 2015, however, this approach has been replaced by a sense of euphoria given the decision from Washington to withdraw from JCOPA in May this year. For Netanyahu himself, who is the Israeli leader persisting the "Iran threat" for many years, his speech at UN to strongly criticize Iran might be interpreted as a major victory at home.