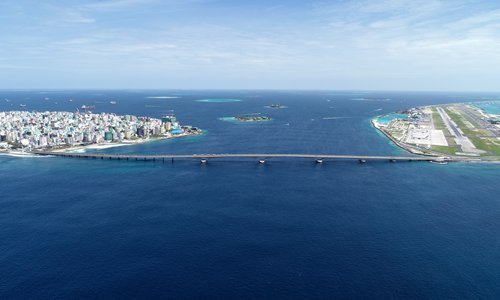 An aeriel view of the China-Maldives Friendship Bridge linking the Maldivian capital of Male with neighboring island Hulhule on Friday. (Photo: Xinhua)

Some officious Indian media outlets have forcibly linked a cooperation agreement between the US and the Maldives with China recently. They said the resource-rich Indo-Pacific region is where China has been trying to increase its influence, and the US is pushing for a broader role of India in this region. The Indian outlets implied that the recent US-Maldives deal is targeted at China's growing influence in the Indian Ocean.

The defense and security pact between the US and the Maldives was reached on the backdrop of growing transnational threats such as piracy, violent extremism, terrorism, and illicit trafficking, said the Maldivian Ministry of Defence.

Judging from the content of the deal and the remarks made by the two countries' officials, this should be a normal cooperation. As long as it contributes to maintaining peace, security and prosperity in the region, all countries in the region and the world should respect and welcome it.

If there is really a target of the deal, it should be India rather than China. As the most powerful country in the Indian Ocean, India has always regarded the region as its own sphere of influence and it remains highly vigilant against the presence of countries from outside of the region.

In the Maldives, India's influence has always been the dominant one. The national security of the Maldives is largely guaranteed by India. Therefore, New Delhi is on high alert when other countries' investment and assistance in infrastructure are offered to the Maldives.

China has engaged in extensive mutually beneficial cooperation with the Maldives. However, China has never been exclusive toward Maldives' relations with other countries. The defense cooperation deal between the Maldives and the US has de facto broken India's monopoly in this area. If India is not worried, what shall China worry about?

The vast majority of China's trade with the Middle East, Africa and Europe passes through the Indian Ocean, while China has been expanding cooperation with regional countries. Given that there are various unsafe factors in the Indian Ocean such as piracy and natural disasters, maintaining the freedom of navigation and maritime safety in the region is of vital significance to China. This is also a common concern of countries bordering the Indian Ocean, as well as other relevant nations.

China has no territorial or maritime disputes with any country at the Indian Ocean. Instead, China has sent the People's Liberation Army Navy to the Gulf of Aden for convoy missions and set up a support base in Djibouti. In addition to safeguarding the freedom of navigation and safety of Chinese vessels, China also assures security for the international community.

India, the most powerful country at the Indian Ocean, regards China's existence as a threat. Interestingly by contrast, most countries which are weaker than India in the region regard China as a constructive force and actively expand cooperation with it. They welcome China's presence in the ocean and some countries have even invited China to set up military bases.

The contrast arises because India sees the Indian Ocean as its sphere of influence - despite other littoral countries' hope for a free and open Indian Ocean. In the past, India saw the US presence in the Indian Ocean region as a threat. The US was once seen as a threat to the region by India. Now, as India strategically regards China as its greatest threat, it has turned to tolerate the US presence in the region. It has even joined hands with the US to neutralize China by actively catering to the US' Indo-Pacific Strategy.

Some Indian media, scholars and officials often take for granted that other regional countries treat China as India does. Thus, as long as there is cooperation between those countries with the US or India, it would be interpreted by Indians as a counterweight to China's influence - like a conditioned reflex.