OPINIONS Why should China still be seen as the largest developing country?

Why should China still be seen as the largest developing country? 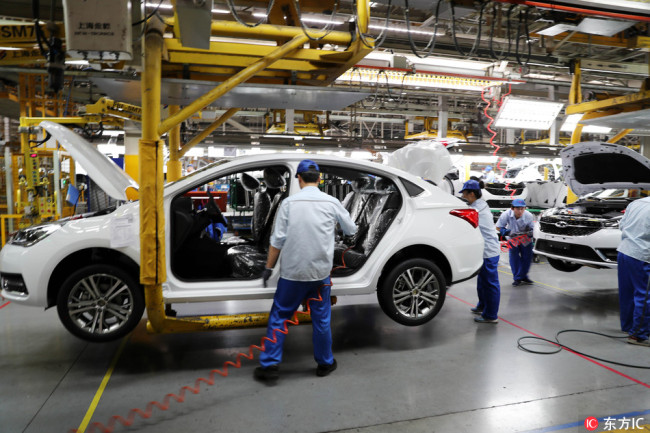 China has made significant achievements in terms of its economy since the introduction of the reform and opening up policy. However, along with the increasing scale of China's economy and improvements of science and technology, there have been incorrect judgments made about China's stage and level of development, namely, China is no longer a developing country. A minority of people overseas with ulterior motives came up with failed theories about the breakdown and collapse of China. In recent years, those people have pushed arguments that appear to be flattering China by saying it should act like a developed country.

We should know clearly that China is still the largest developing country based on assessments of its per capita wealth, industrial structures, employment structures, level of innovation, and the balance and efficacy of its development.

I. Despite China's economy reaching a new level, its per capita wealth is still lower than world average, and much lower than that of developed countries.

To measure the real level of a nation's economy, the overall scale of its economy and its per capita level should all be taken into account. Since the adoption of the reform and opening up policy, China's economy has increased by 9.5 percent every year on average. China's GDP reached 12.25 trillion U.S. dollars in 2017, which is the world's second largest. It is narrowing the gap with the United States, and its contribution to the total world economy was more than 30 percent many years in a row.

China's per person capital stock for infrastructure is only 20 to 30 percent that of developed countries, and infrastructure development in China's western provinces and poverty-stricken areas is still far from adequate.

Looking at the level of consumption, China's average consumption per person in 2016 was 2,506 U.S. dollars, which was less than half the global average (5,913 U.S. dollars) and only 7 percent of that of the United States (36,405 U.S. dollars). And there is still a significant gap between China and developed countries when it comes to the consumption of durable goods. At the end of 2017, the rate of car ownership in China was 29.7 cars per 100 household, which is far lower than the 200 in the United States and over 150 in some developed countries in Europe.

From the perspective of the consumption rate – the proportion of national GDP made up of household spending – the level is much lower in China than it is in developed countries. In 2015, Chinese residents' consumption rate was 37.1%, while the number was 68.1% in USA. And the Engel's Coefficient for residents of China – the share of income spent on food – was 29.3 percent in 2017, much higher than that of developed countries. This shows that spending on basic consumption still takes up a relatively large proportion of the income of Chinese residents, while spending on culture, health, and entertainment is much lower than that of developed countries.

II. Despite the great change in China's economic structure, there is still a need to upgrade its industrial and employment structures.

The proportion of primary industry in a nation's GDP in developed countries is about 2 percent on average, and around 23 percent for secondary industry, including some high-end manufacturing. Tertiary industry makes up about 75 percent.

There has been constant upgrading of China's industrial structure since the start of the reform and opening up policy. The overall trend is towards a lower proportion for primary and secondary industry and a higher proportion in tertiary industry. In China in 2017, the ratio was 7.9 to 40.5 to 51.6 respectively. Compared with developed countries, China's primary industry still takes up a relatively high proportion of the industrial structure, with a large-scale but weak manufacturing industry, standing at the middle to low end of the global industrial chain, with an insufficient supply of middle and high-end products. The service industry makes up a relatively low proportion of the economy, and the knowledge-intensive modern service industry is even smaller. Such an industrial structure indicates that our national industrial competitive capability is not strong enough, with the lack of advanced technology and innovation a disadvantage for China in the global industrial economy.

The advantages of developed countries including the United States, some European countries, and Japan in innovation, design, and internationally renowned brands remains the same. Accordingly, despite the fact that our nation's employment structure is upgrading, with lower rates of employment in primary industry and higher rates in tertiary industry, the proportion for the three industries were 27.7 to 28.8 to 43.5 respectively in 2016, which leaves a relatively large gap between China and developed countries in terms of its employment structure.

III. China has yielded fruitful results in innovation-driven development, but still lags behind in technological innovation.

Since China implemented the policy of reform and opening up, a system for innovation with companies as the main driving force has been basically established. China has contributed significant innovation with global influence in both fundamental and frontier areas with increasing input in R&D.

Though China has made its leap from lagging behind to taking the lead in global competition in some areas, it still has a lot to do to catch up in technological innovation. Weak capabilities to develop and innovate and a lack of core technology are hindering Chinese companies from further growth. About 80 percent of key technologies, most of high-end equipment and core components are imported from foreign countries. China has few well-known companies that own key technologies with independent intellectual property rights.

Due to a lack of indigenous innovation, China hasn't yet become a great manufacturing power, though it is a productive manufacturing country. The industrial added value rate has dropped to 21.5 percent in 2016 from its peak at 29.7 percent in 2006. However, the numbers of some countries, such as the United States, Germany and Japan, have long been higher than 40 percent. Although China has seen increasing innovation in technologies, products, development patterns, as well as accelerating integration of traditional and emerging industries, there hasn't been a system of innovation-driven development in the country so far.

IV. The coordinated development between urban and rural areas has been significantly enhanced, but there is still an outstanding problem of unbalanced growth among regions.

Thirdly, the income distribution is unbalanced. China's Gini Coefficient was 0.465 in 2016. Distribution is even more unbalanced if the gap of property amount is taken into account.

Fourthly, economic and social development is unbalanced. It can still be cumbersome for some to receive medical treatment, choose a school for their children and provide for the aged due to various challenges.

Fifthly, there is imbalance between economic and ecological development. China faces the contradiction between poor ecological environment and the people's ever-growing needs for a better natural environment.

V. China's market vitality and social creativity have been enhanced, but the problem of insufficient development still needs to be solved.

Comparatively, developed countries attach more importance to market unity and fair competition, the protection of intellectual property rights, the removal of all kinds of market barriers, promotion of the free flow of production resources across regions, and enhancing resource allocation efficiency and fairness. Currently, China is still lagging behind in the following areas.

First, there isn't enough market competition. There are still unnecessary and unequal restrictions on market access. Administrative monopoly and discrimination on ownership occur frequently. It is difficult for some "zombie enterprises" to exit the market. The problem of local protectionism still exists.

Third, there is not adequate supply. The availability of supply is not keeping up with the upward changes to the consumption structure of residents, and the personalized needs of consumers are hard to meet.

Fourth, the construction of the market system is not sufficient. The decisive role of the market in resource allocation is still constrained by institutional mechanisms. There are many inadequacies in some systems including supervision, product quality, food safety, and the protection of intellectual property rights. And there is still no mature institutional environment that is conducive to innovation, coordination, greening, openness, and sharing.