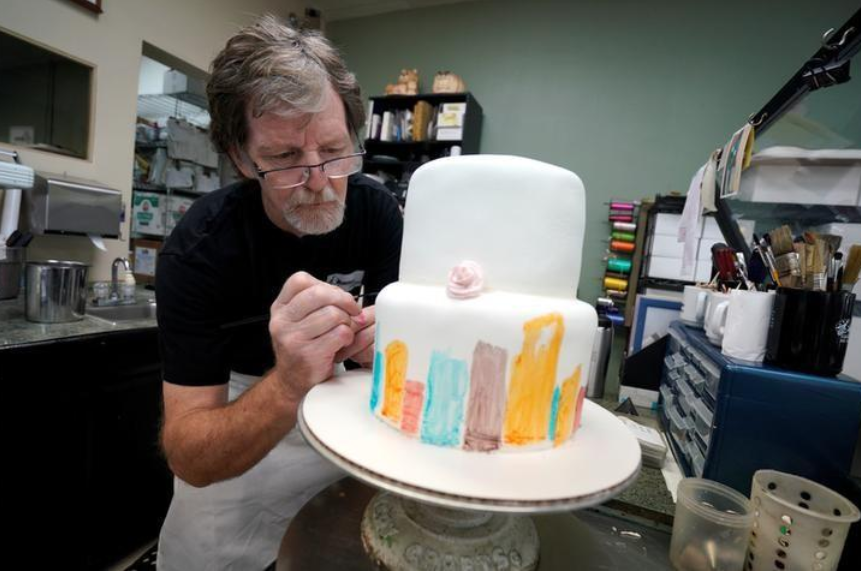 In early December, the Supreme Court will hear oral arguments in Masterpiece Cakeshop v. Colorado Civil Rights Commission. The case, in which a conservative Christian bakery owner seeks the right to discriminate against gay couples, is the latest attempt by conservatives to carve out special exemption for business owners to civil rights laws.

If the briefs filed by the petitioner and its most influential allies are any indication, the strategy will likely be to portray this case as a unique one that would warrant a very narrow constitutional exception. But don’t be fooled. If the state of Colorado’s application of its laws is found to be unconstitutional, it would unleash a widespread assault on civil rights protections.

In 2012, David Mullins and Charlie Craig visited Masterpiece Cakeshop in Lakewood, Colorado, to arrange for a cake to be made for their wedding reception. They were told by Jack Phillips, the store’s owner, that he could not fulfill their order because his religious beliefs prevented him from preparing goods for same-sex wedding ceremonies (although he was otherwise willing to serve LBGT customers). Mullins and Craig sued Masterpiece under Colorado civil rights law, which forbids discrimination on the basis of sexual orientation by “public accommodations” (businesses or other institutions that are regularly open to the public). Mullins and Craig won: the Colorado Civil Rights Division agreed that Masterpiece had illegally discriminated against them, and its decision was upheld by the Colorado Court of Appeals. Masterpiece appealed to the United States Supreme Court, which agreed to hear the case.

It would be natural to assume that this case will be argued on the basis of freedom of religion protections in the First Amendment of the U.S. Constitution. The Supreme Court has recently given companies broad freedom to ignore laws in deference to the owner’s religious faith. In Burwell v. Hobby Lobby the Court held that employers could reject requirements that taxpayer-subsidized employer-provided health insurance cover contraception if doing so would violate the religious beliefs. But while Masterpiece has raised religious freedom objections, the case is unlikely to turn on these grounds. Since the 1990 decision in Employment Division v. Smith, the Supreme Court has held that the free exercise of religion clause of the First Amendment is not violated when a religion-neutral law incidentally burdens an individual’s religious beliefs, as long as that law did not intentionally target religious minorities. Colorado’s application of civil rights law clearly did not violate the free exercise clause based on this precedent, so an argument solely on free religion grounds would be a certain loser.

The Hobby Lobby ruling was based not on the First Amendment but on the federal Religious Freedom Restoration Act (RFRA), a statute passed in response to Employment Division. Since the 1997 Supreme Court ruling in City of Boerne v. Flores, however, RFRA does not apply to state governments. It would therefore be nearly impossible for Masterpiece to prevail on a religious freedom claim.

Backed up by a brief from the Trump administration’s Department of Justice, Masterpiece will almost certainly focus on another part of the First Amendment: the free speech clause. The shop is arguing that, given the artistry involved in creating a custom wedding cake, compelling it to create a cake for a ceremony it morally disapproves of would violate its rights to freedom of speech and expression.

Creating religious exceptions to generally applicable laws would make civil rights statutes very difficult to enforce, since discrimination based on race, gender, or sexual orientation can all be defended on religious grounds. If applied logically, a religious exemption would quickly mean that civil rights laws exist only at the pleasure of the employer.

Recognizing this liability in a free expression argument, Masterpiece will likely claim that a free expression exemption applies only in the very narrow context of a mom-and-pop bakery being asked to make something for a particular ceremony. Most employees of most companies, they will argue, are not engaged in activity that is similarly expressive.

But as the libertarian legal scholars Dale Carpenter and Eugene Volokh argue in their persuasive amicus brief on behalf of Colorado, if Masterpiece’s free speech claim were accepted by the Court, it would “apply to a vast range of conduct.” Many of the activities employees and their supervisors engage in on the job have elements as potentially “expressive” as baking a cake, and this is true of both tiny storefronts and Fortune 500 corporations. “[Restaurant chain] Subway calls its sandwich-makers ‘sandwich artists,’” Carpenter and Volokh observe, “[b]ut a restaurant may not refuse to cook or prepare a table for certain customers on the ground that it would be a free speech compulsion.” Similarly, a florist who didn’t want to participate in a same-sex wedding could declare themselves “floral artists,” hotel receptionists could declare themselves “phone answering artists,” and so on.

It is unclear about where the line would end up being drawn should the Court accept Masterpiece’s free speech argument. But even if it ended up being fairly narrow, it would still require extensive litigation to find out. And it’s likely that in practice the exceptions would not be narrow at all. The wise approach for the Supreme Court would be to follow the lead of the Colorado court and uphold the sound judgement of the state’s civil rights commission: that while Jack Phillips is entitled to his beliefs, when he opens a business to the public he is required to follow state laws and treat his customers equally.