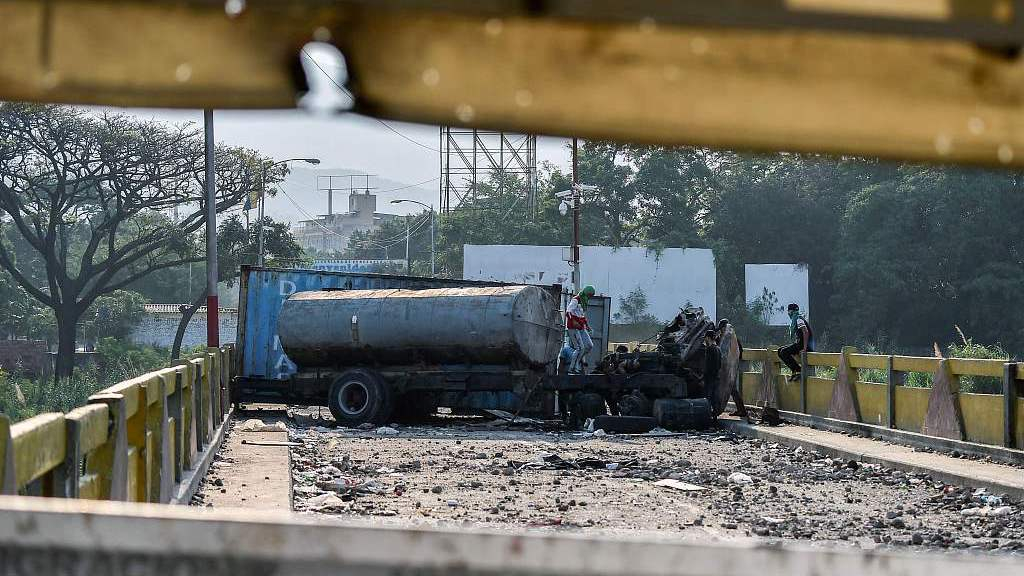 Demonstrators dismantle a truck which was burned down at the Simon Bolivar international in San Antonio, Venezuela, February 25, 2019. (Photo: VCG)

China's Foreign Ministry spokesperson Lu Kang deserves a pat on the shoulder for urging the international civil society to provide "constructive" help to Venezuela based on respect for the country's sovereignty.

Sadly, with U.S. Vice President Mike Pence's promise of new "concrete action", that "all options are on the table," and that Washington would not rule out removing President Maduro militarily from power,the same cannot be said about the Trump White House and its hardcore officials.

They rule out any dialogue with President Maduro, threaten military foray, and fancy "liberation effort". In making their pitch, they have even forced some European nations to recognize the clueless head of Venezuela's National Assembly, Juan Guaidó, as the country's legitimate president.

A lot of the pieces, as well, have fallen into place, to the point that Trump is demanding that the UN do the same - where he has less support for doing this than he had initially thought.

Nevertheless, in this new Venezuelan adventure, manufacturing a "humanitarian" justification for regime decapitation, and mass funding of the political opposition is not a policy at all. Rather, it's righteous self-delusion, so American and so unpopular.

Maduro government's continued rule rests heavily on the military. The majority of the Venezuelan people, as well, remain loyal to the elected government and the sitting president.

To substantiate, over 86 percent of Venezuelans oppose the U.S. or international military coup and blood-soaked intervention. Further still, according to 150 international observers from 30 countries and organizations, the last Venezuelan election was transparent. This clearly means the clueless Guaido forces and Washington neocons have no right to denounce it as "fraud foretold".

Into the argument, the people of Venezuela are aware that this regime change drama put on by Trump is for purely domestic political reasons. Of course, Trump might simply swear that his administration is religiously ready to respect and preserve what refers to as Venezuela's patrimony for the sake of "liberation" and democracy. But when it comes to serious coverage, that will be about that.

At any rate, past indications are that the only real hope for a peaceful outcome lies in national dialogue and "constructive" help from the international civil society.

Seeing that this is a much better option than the current neocon plan to starve Venezuelans into revolt by applying crippling economic sanctions, some 86 percent, as well, disagree with U.S. military intervention and don't take its "humanitarian" hypocrisy seriously.

On top of this, a new report by the polling firm Hinterlaces shows that 81 percent Venezuelans oppose the U.S. sanctions regime that has gravely hurt the South American nation's economy. They believe peaceful and democratic alternatives exist to address their very real economic and political problems.

The spirit of the times is that such search for dignity and self-determination could best be pursued by adhering to their constitution and the rule of law, blended with a statist concept of faith in their democratic elections.

There's no doubt Venezuelans are suffering and some want to see a change in governance. But that has to come through the ballot box and not U.S. intervention. It's true that some Venezuelan people have grown tired of the economic crisis that has exploded under Maduro's watch. But that does in no way mean all citizens support the faltering opposition and beg for the U.S. invading.

In this darkest hour, the roadmap for Venezuela is non-military solution and not effectively creating two governments, the clearest consequence of which would be to deepen the rift in Venezuelan society by forcing citizens to choose sides and take up arms.