Why won't some Americans wear masks? 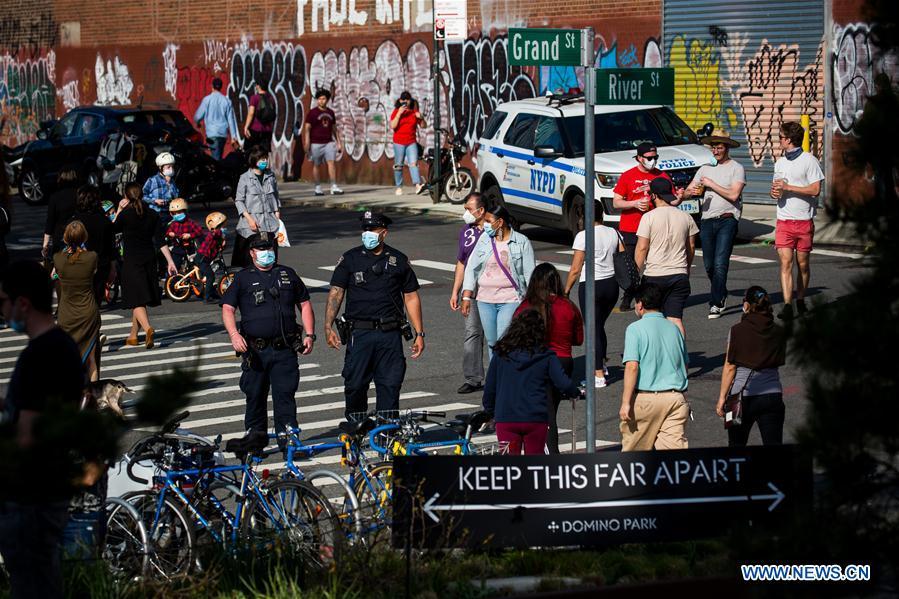 People pass by a placard reminding people to keep social distances at a park in New York, the United States, May 3, 2020. (Photo: Xinhua)

That begs the question: why?

When the outbreak began to overrun the country, the Surgeon General even told Americans not to wear masks. His reasoning was that masks had not been proven to stop the spread of disease.

Somewhat contrarily, he also said masks should be reserved for front-line medical workers.

Eventually many Americans began to realize how the government's recommendations made no sense and started to wear masks of their own volition for the logical reason: If masks protect people working in hospitals, wouldn't they protect people at the grocery store, too?

On April 3, the Centers for Disease Control and Prevention (CDC) issued a statement, "The CDC continues to study the spread and effects of the coronavirus across the United States. We now know from recent studies that a significant portion of individuals with coronavirus lack symptoms ('asymptomatic') and that even those who eventually develop symptoms ('pre-symptomatic') can transmit the virus to others before showing any symptoms."

Better late than never. Yet, there was already a study in The New England Journal of Medicine on January 30 that suggested the virus could be transmitted by people without any apparent symptoms.

Hence, the United States government waited a long time without warning its citizens about how COVID-19 could be transmitted between humans, perhaps causing many more people to get sick than otherwise would have.

Now, many cities and states have started to implement rules to require people out shopping to wear masks. However, those rules are not always being followed by Americans or enforced by businesses and the police.

For example, at "protests" against a social distancing policy occurring at state capitols across the country, almost none of the protesters carrying guns wore masks, even as they crowded up against each other and spat in the faces of journalists and security guards.

They are using their menacing presence to try to pressure lawmakers to abandon a feasible epidemic protection policy or to make it so hard that they pull back from enforcement.

In fact, in a number of cases around the country, there have already been examples of people murdering, or threatening to murder, store employees for daring to keep their customers and staff safe. Calvin Munerly, a security guard at a Family Dollar store in Detroit, Michigan was shot and killed after telling a customer she must wear a mask.

Also, in the Detroit area, an unmasked man wiped his nose on the shirt of an employee after being told to leave.

In the city of Stillwater, Oklahoma, the city manager announced he was rescinding a requirement that all customers must wear masks after a number of threats were made against workers, including one threat to shoot them. In Ohio, Governor Mike DeWine also pulled back from a requirement that people wear masks.

In both cases, the mayor and governor still "recommend" that people wear masks; but if some sick people refuse to wear masks, they're still going to infect others, whatever the government "recommends."

DeWine's irrational justification explains part of the reason why some Americans don't wear masks. Some Americans, who are mostly on the right-wing, have a deformed idea about what "freedom" means and will refuse to comply with any laws or regulations they don't like.

To raise the theoretical idea of "freedom" in such a situation makes no sense, as wearing a mask does not infringe on anyone's rights or require any kind of meaningful sacrifice.

The number of radical reactionaries in America who refuse to wear masks for delusional theoretical reasons is relatively few as a proportion of the whole population, but they still form a much larger number than in the other countries.

Personally, when the news was first spreading in China in early January of a virus, the full details of which were unproven at the time, I thought wearing a mask wouldn't make a difference. But when it became clear – after study and observation – how bad the pandemic could get, I quickly adapted to wearing a mask outside my hotel room.

That China, Japan, and South Korea already had a culture of wearing masks and had already faced the 2003 SARS epidemic, clearly made it easier for people to don masks from day one. Americans faced a longer learning curve.

There are some other factors, like racism and individualism. There has been a rise in hate crimes against Asian-Americans, either because the victims were wearing masks or because they weren't!

Finally, the idea that it is necessary to wear masks to protect the whole population from transmission, not just oneself, is somewhat at odds with America's extremely individualistic culture. But, surely, we've had enough time to learn the importance of mask-wearing by now.