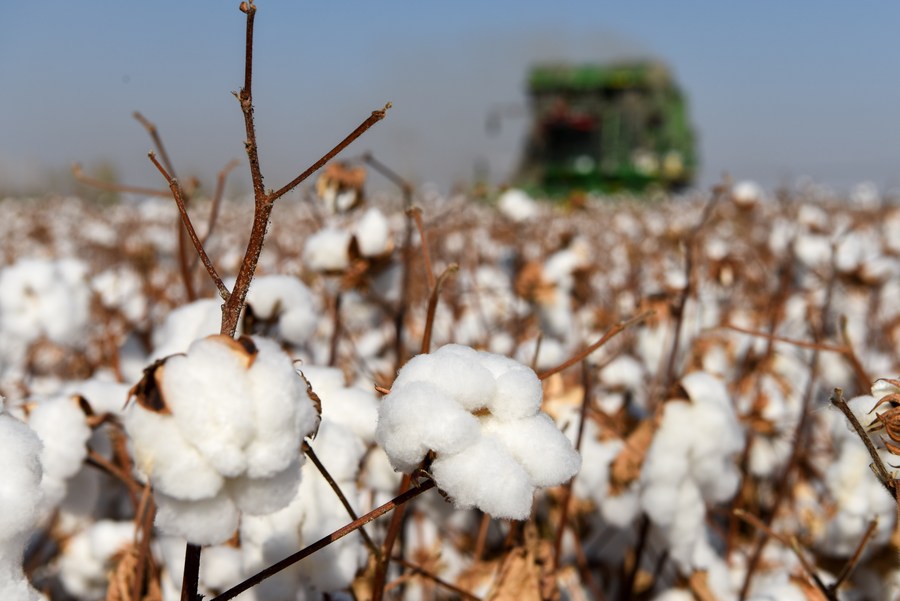 BEIJING, April 1 (Xinhua) -- Over recent weeks, some Western groups are clamoring about "forced labor" claims in the cotton industry in China's Xinjiang region. But their hype sounds like a conspiracy all too familiar.

Chinese netizens found of late that H&M and other members of the so-called "Better Cotton Initiative" (BCI) had cited "forced labor" allegations to slap a ban on the use of Xinjiang cotton and even the employment of Uygurs, which followed a similar decision by the United States last year.

The Chinese public is incensed, and rightly so. For starters, that ban was built on fabrications, not on facts. And one of the basic facts is that Xinjiang's cotton industry is already highly mechanized. Now about 70 percent of the crop in the northwestern Chinese region is harvested by machines.

Even the BCI's own Shanghai branch has said it found no single incident related to "forced labor" in Xinjiang in the past eight years. But the conclusion was overruled by the BCI's headquarters in Geneva.

Beneath the outright denial of facts lies a plot not so hard to decipher.

By banning Xinjiang cotton, some Western forces are trying to strangle cotton businesses and damage people's livelihoods in the Uygur autonomous region. In word, they claim they are concerned about the Uygurs; in deed, they are just making life difficult for them.

Then those anti-China elements would take advantage of the resultant social unrest in Xinjiang to make trouble for China and hold back China's development.

Now the true agenda behind the Xinjiang Cotton plot has become as clear as the double-dealing of those Western groups. Actually, Lawrence Wilkerson, the chief of staff to former U.S. Secretary of State Colin Powell, once publicly confessed that the best way for the U.S. Central Intelligence Agency to destabilize China would be "to form unrest" in Xinjiang.

And as a matter of fact, that ploy comes directly from Washington's old playbook. The world has seen similar tactics being used on Iran, Iraq and Libya.

But China is China. The Xinjiang plot is doomed to failure. Just like what has happened over Hong Kong and South China Sea issues, China and the Chinese people, including the Uygurs, have the capacity and resilience to foil all sinister foreign plots.

Ironically, if there is anything helpful coming from all the rumor-mongering about Xinjiang, it is that it has once again reminded the world of America's dark history of slavery and racial prejudice, as well as the human rights abuses happening in the United States all along.

Given all the pandemic deaths, hate crimes, mass shootings and violent protests, isn't it high time that Washington retracted its meddling hands and started focusing on protecting and improving the human rights of the American people?