Will cow dung lamps make a better Diwali for India? 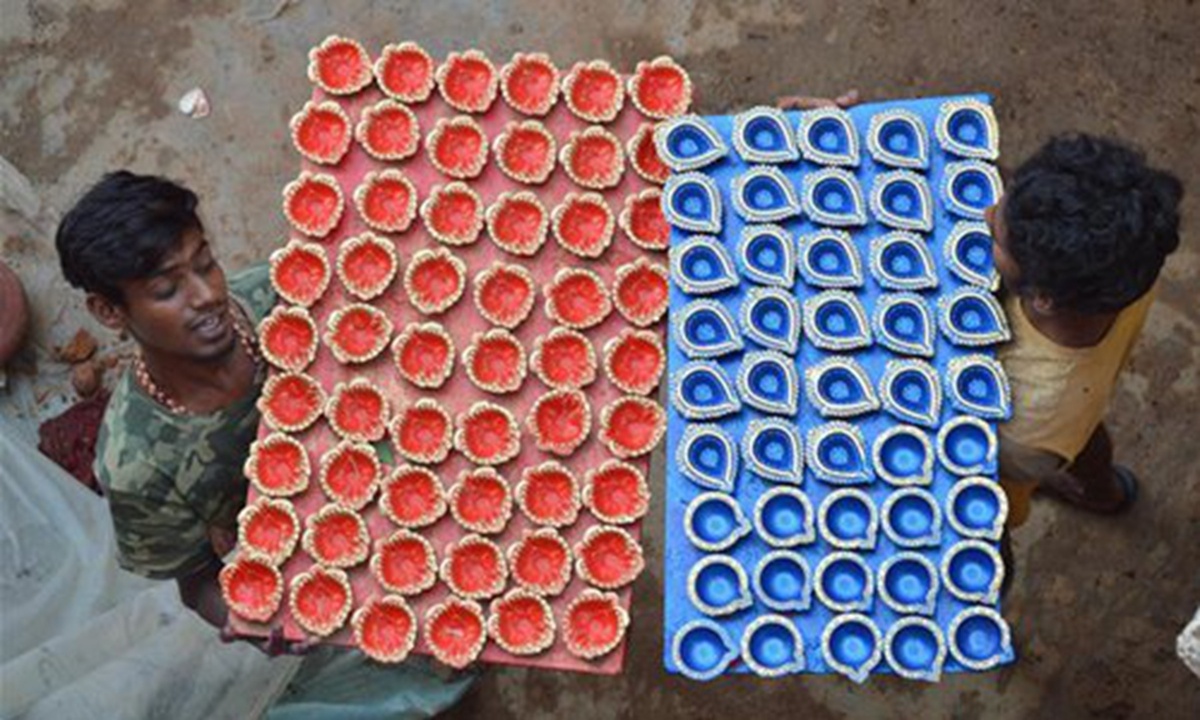 With only one week or so remaining for Diwali, the Indian market has reportedly witnessed an obvious drop in demand for Chinese lamps and decorative items amid the ongoing border tensions between China and India.

With the China-India relationship at a low ebb so far this year, it is somehow understandable that the boycott of Diwali-related products from China is more severe than ever among various Indian communities. Such an outcome may mean economic losses for Chinese businesses, but at the same time it could also represent a deterioration of the quality of life for Indians, especially the poor people.

According to Indian media reports, traders in Jaipur agreed not to sell Chinese lights or decorative items this Diwali season, and Indian consumers have become willing to pay more money on Indian-made products in preparation for the upcoming festival.

Some Indian media outlets even claimed that the boycott of Chinese products would inflict huge business losses that could reach as much as 400 billion rupees ($5.38 billion) on Chinese exporters this Diwali season.

Such self-righteous thinking may reflect a poor understanding by some Indians of China's export scale of small commodities. While Diwali is an important festival in India, its relevant trade volume is quite small compared with China's small-commodity exports. In Yiwu, East China's Zhejiang Province, the world's largest small commodity hub, Diwali's merchandise trade volume is far less than that of Christmas products.

Moreover, since the epidemic outbreak and the border clash between China and India, some companies that used to sell small commodities to India have quickly shifted their focus to the domestic market or other neighboring countries so as to avoid business risks from India. Even those who have still maintained their Indian business have chosen to adopt risk-aversion measures by demanding full advance payments due to concerns over India's trade policy or tariffs, according to a report in The Economic Times back in July.

All these factors will inevitably lead to a decrease in Chinese products on the market for this year's Diwali, and its impact will be felt among Indian consumers eventually.

Some may be willing to buy Indian-made products at a much higher price to show their support to their country's manufacturing sector, while others who cannot afford too much on the festival are expected to have a bad consumer experience with some stinky lights. For instance, an organization announced to produce 330 million earthen lamps made from cow dung for the Diwali festival to counter Chinese lights. The consumer experience of the primitive diyas may be just one of the costs of Indians' boycott of modern products from China.

There has always been a backlash against Chinese goods in India, but it is still worth noting that the China-India trade is based on mutual benefits and interests. A heavy blow to bilateral trade may also bring a huge impact on industrial chains and downstream consumer markets. Chinese exporters will certainly suffer, but so will the interests of Indian consumers.

If India wants to replace Chinese products with made-in-India products, then it should accelerate its own manufacturing development to produce more modern goods, instead of pushing for the use of some primitive products, which represents nothing but a decline in the living standards of its people.