Will NBA’s downfall be CBA’s windfall? 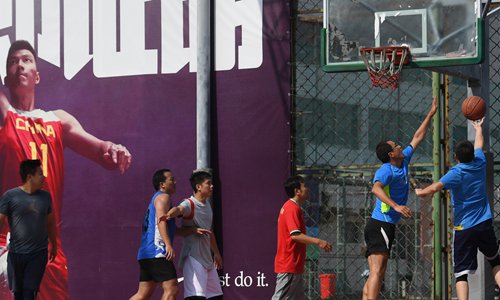 People play basketball at an outdoor court in Beijing on Wednesday. (Photo: AFP)

As the US National Basketball Association (NBA) risks being severed from the Chinese mainland market for good, China's domestic basketball teams, the companies that supply their products and the media outlets that cover them have an opportunity to reform and transform themselves into something bigger and better, and fill the void left by the NBA, Chinese analysts and industry insiders said on Wednesday.

As of press time on Wednesday, 21 Chinese firms had released official statements halting or suspending their cooperation with the NBA, which now risks losing the Chinese market, its biggest overseas market. The moves follow a tweet from Houston Rockets General Manager Daryl Morey supporting the Hong Kong riots, and the NBA's subsequent handling of the matter.

Investors on the Chinese stock markets were the first to sniff out the opportunity. As the NBA incident continued to brew on Wednesday, a number of listed sports companies that have relationships with the Chinese Basketball Association (CBA), China's professional men's basketball league, rose by the daily limit of 10 percent.

Sports fans and netizens discussed what will happen in the Chinese basketball market, a market the NBA spent three decades to help nurture. Many are of the opinion that this could be a chance for the CBA to grow.

Industry experts said that the modern sports industry, with organizations such as the eyeball-grabbing NBA, has morphed into a media phenomenon. Along with that comes commercial interests, such as companies running ads to boost their brand value.

"Now that the NBA's media clout in China has evaporated, the CBA stands a good chance of staging reform and improving its quality, and giving domestic audiences impressive shows to fill the void potentially left by the NBA," He Wenyi, executive director of Peking University's China Institute for Sports Value, told the Global Times on Wednesday. But he said that the domestic league still has a lot to do to catch up with the NBA.

CBA boss Yao Ming faces a challenge to improve the performance of the league as it will dictate the level of migration of former NBA fans to the CBA, eastday.com reported Wednesday.

Yao, who once played for the Houston Rockets basketball team, is an icon for Chinese sports.

The content of reform includes, according to He, making its players more self-disciplined and raising more players to stardom.

However, He disagreed with the theory shared by many netizens that the fans who used to watch both the NBA and the CBA will automatically shift to the CBA.

"It is not a given, and there won't be a windfall. The CBA has to fight for its expansion from any void left by the NBA," He said.

Pan Hongyuan, the secretary general of the Fujian Shoemaking Industry Association and a sports industry observer, said that in terms of ad income, the CBA's benefit from the NBA's exit will be limited as its sponsor ecosystem is relatively fixed and sports ads tend to be exclusive.

Peak and Li-Ning, another Chinese sports brand that invested handsomely in CBA games, declined to comment on the potential impact of an NBA exit on their business on Wednesday.

In recent years, emerging Chinese sports brands have splashed out on sports events, and NBA games have been a main battleground.

But Chinese experts said that brand image and the quality of offerings go hand-in-hand, emphasizing the continued input into the products and services of homegrown brands.

NBA Commissioner Adam Silver was scheduled to visit Shanghai on Wednesday, where a major NBA fan event was called off by Shanghai Sports General Association at the last minute due to the controversy.

China's sports industry was worth 2.2 trillion yuan ($310 billion) in 2017, and it's growing 20.6 percent annually, Xinhua News Agency report in January.