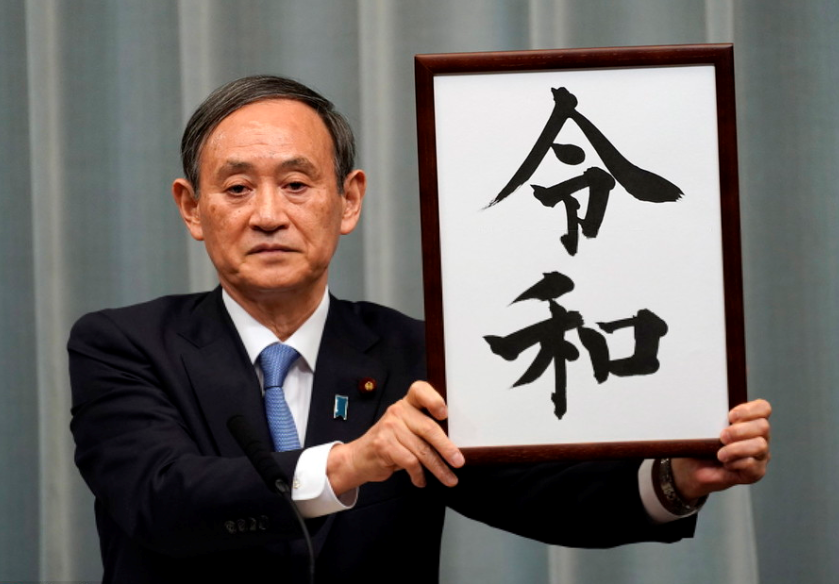 Despite many claiming the naming of Japan's new imperial era is a break with tradition, the two Chinese characters that make up Reiwa, the era beginning May 1, is as traditional as it could be. The new era begins with Crown Prince Naruhito ascending to the throne on the first day of next month to succeed his father Emperor Akihito, whose reign, the Heisei era, ends on the last day of this month.

So what should we make of Reiwa as the latest imperial era of Japan? To announce the coming of the new era, Japan's Chief Cabinet Secretary Yoshihide Suga held a placard with two calligraphed characters, (rei wa). The two characters come from the preface of Manyoshu, a Japanese literary classic compiled in the 8th century, which sings paeans to the spirit of plums that survive the cold, harsh Japanese winter.

The two characters come from the upper and lower halves of the same line in a poem, which translate into English as: "This the month chosen by the early spring, when the ambience is mild and the breeze gentle." (translated by the author).

If we were to make a strict match of characters and words, rei would mean "chosen" and wa "gentle". And if "chosen gentle" does not make any sense, then "chosen peace" would be a much more comprehensible version, as wa could mean many things, including being gentle, calm, harmonious, synchronized, and peaceful.

As the name of a new era, "chosen peace" augurs well for the Japanese people and government, but it also increases their tasks to make the era really peaceful. Japanese Prime Minister Shinzo Abe elaborated on the poetic preface as "the arrival of spring following winter's bitter cold, and the spectacle of the plum blossoms in splendid bloom". Which, in a way, describes what Japan has gone through during the soon to end Heisei era, which translates into English as "ordinary achievement" or "uneventful path".

Japan had its heydays of economic boom in the 1960s, 1970s and a good part of the 1980s until it signed the Plaza Accord with the United States, the United Kingdom, France and Germany in 1985. The Japanese economy suffered another blow from the 1997 Asian financial crisis, followed by the 2008 global financial crisis. Which means the Japanese economy has suffered one blow after another since signing the Plaza Accord.

That Japan rose from the ashes of its defeat in World War II to become the world's second-largest economy by 2010 made many observers label it an economic powerhouse. But the path its economy has taken since the late eighties has made it difficult for the world to put a label on it.

As the beginning of a new imperial era, 2019 signifies a new start not just for Japan but also for the rest of the world. In recent years, the world has witnessed the rise of nationalism and populism, and a backlash against globalization. And countries across the world are still fighting the threats of terrorism, extremism and separatism. It is against such a background that China has given the call to build a community with a shared future for mankind and demonstrated its resolve to work with other countries to promote lasting peace, stability and prosperity.

So it is no coincidence that Japan, a country that shares deep cultural ties with China, has named its new imperial era Reiwa. The world now waits to see whether Japan will fulfill its promise to contribute to global governance and peacemaking.