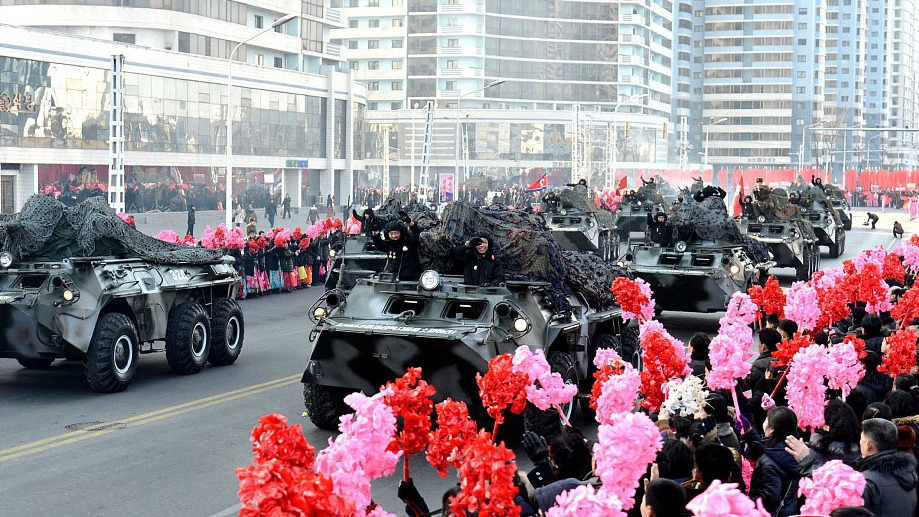 On February 8, 2018, the Democratic People's Republic of Korea (DPRK) conducted a massive military celebration to commemorate the establishment of the Korean People's Army (KPA) in 1948. Until 1978, every February 8 was commemorated as the army creation day.

On February 8, 1978, however, the DPRK newspaper Rodong Sinmun made a statement that it has been “thirty years since the Great Leader respected comrade Kim Il Sung reinforced and developed the armed forces of our people into a regular armed forces.” According to the newspaper, the real history of the armed forces of the Korean people actually began on April 25, 1932, when Chairman Kim Il Sung founded the “Korean People's Revolutionary Army” (KPRA).

Since then, DPRK often launched large military parades on that day in order to celebrate the establishment of the “anti-Japanese guerrilla units.”

In 2018, DPRK announced that it had changed the date of the founding of its army from April 25 to February 8. The restoration of the holiday has been believed to resume the revolutionary tradition inherited by the Kim Il-sung era. There is no doubt, however, that April 25 is still celebrated. In this sense, it's more an adjustment than a reform.

Since US President Donald Trump met DPRK leader Kim Jung Un in Singapore last June, the US-ROK joint military exercises have raised the concern. Trump announced he was suspending the exercises; a decision that caught the world by surprise.

On September 19, 2018, President of ROK Moon Jae-in and DPRK leader Kim Jong Un jointly announced the September Pyongyang Declaration, which appears to break new ground in inter-Korean relations, although much of the Declaration has been covered in previous inter-Korean agreements.

It indicates the two Koreas certainly have made concerted efforts to reduce military tensions in regard to conventional weapons, improved relations by stressing the importance for Koreans to band together as “one people”, and addressed gradual denuclearization.

On the one hand, in November 2018, the US and the ROK decided to call off the ROK-US. Korean Marine Exchange Program military drills, previously postponed between July and September. Obviously, it has not been enough to remove the DPRK's fears.

Recently, DPRK denounced the ROK military for conducting a series of low-key regional military drills and urged them to be suspended. “The South Korean military must ponder the negative consequences of the kinds of actions that provoke their counterpart and damage the atmosphere for the alleviation of tensions.” the Rodong said.

On the other hand, on February 5th, 2019, the US and ROK reached a preliminary agreement on the cost of keeping nearly 30,000 troops in ROK. According to resources, ROK will boost its financial contribution to nearly 1 billion US dollars. It has been an increase from about 800 million US dollars ROK had previously been paying per year during the previous five-year commitment.

Facing pressures from both the US and DPRK, President Moon will seriously reconsider US military presence in the Peninsula. Although it is still early to urge US to withdraw its troops from the ROK, it is highly possible to reduce or even suspend the joint military exercises before the second summit between Trump and Kim. However, it could release the financial burden while easing tensions between the two Koreas.

However, as Kim said at the press conference, “The road will not always be smooth.” Those efforts face larger challenges such as existing sanctions against the DPRK, Pyongyang's nuclear weapons programs, and finally the lowering alliance between the US and ROK. If any obstacle cannot be removed successfully, the suspension of the exercises in the long run will be an illusion.

Despite the fact that there are difficulties for the two Koreas to overcome, China has vowed to play a “constructive role” in resolving the Korean Peninsula issue. According to the Chinese foreign ministry, China emphasized that it “fully supports” DPRK's commitment to the denuclearization of the peninsula, the legitimate concerns of DPRK's security, and the improving relations between the two Koreas.

With the easing of tensions across the Korean Peninsula since 2018, China has been strengthening its relations with both Koreas by encouraging them to continue engagements. Also, China keeps the wish to cooperate with US on Korean Peninsula issue even though there has been trade frictions between the two countries.

Currently, both the ROK and the DPRK, as well as the relevant countries are holding an historic opportunity. Only a pragmatic diplomacy, coupled with flexible tactics can resolve the long-standing problems in the peninsula. However, any miscalculation and imprudence would be a risk of falling into a rut. History would either be repeated or be changed.