OPINIONS Will the Normandy summit resolve the Russia-Ukraine conflict?

Will the Normandy summit resolve the Russia-Ukraine conflict?

Through the diplomatic efforts of France and Germany, the leaders of the Normandy Four countries (Germany, Russia, Ukraine and France) are scheduled to meet in Paris, France, on December 9, 2019, to resume negotiations to end the five-year conflict in eastern Ukraine. This is the first talk among the four countries since the Berlin summit in 2016, and it also marks the first meeting between Ukrainian President Volodymyr Zelensky and Russian President Vladimir Putin since the former took office. 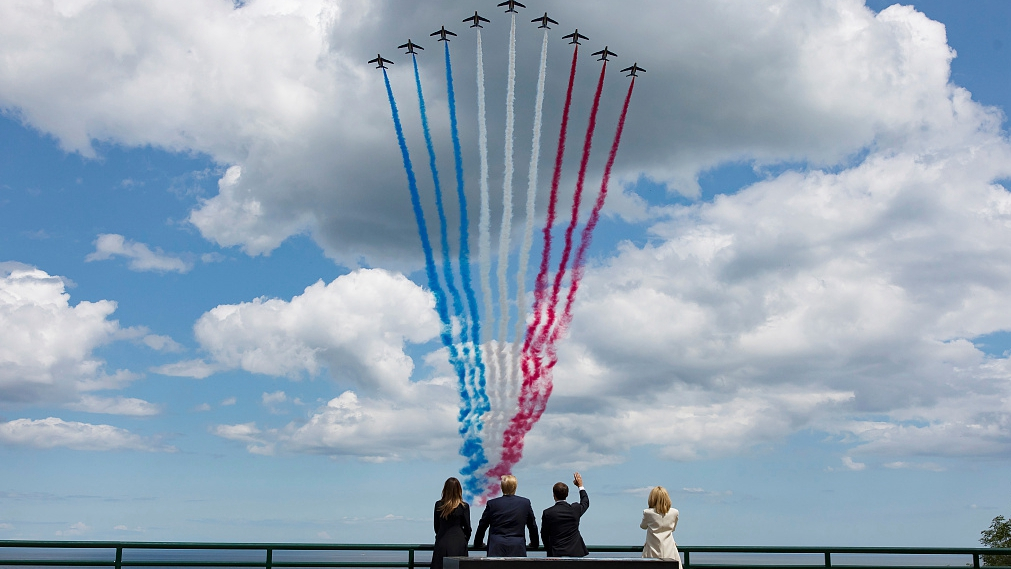 U.S. President Donald Trump and French President Emmanuel Macron look up to the sky during the French-U.S. Commemoration marking the 75th anniversary of the Allied landings on D-Day at the Normandy American Cemetery and Memorial in Colleville-sur-Mer, France, June 6, 2019. (Photo: VCG)

The deadlock after the Minsk Protocol

In 2014, to resolve the Ukrainian crisis and promote Ukraine-Russia dialogues, Russia, Ukraine and the Organization for Security and Cooperation in Europe (OSCE) launched the Trilateral Contact Group on Ukraine and the "Normandy Format" Group as peaceful mechanisms to mitigate the conflict. With the conclusion of the "Minsk Protocol" as a "comprehensive" protocol on July 18, Russia and Ukraine suspended their military confrontation in Donbass. However, during the two weeks after signing the Minsk Agreement, the two parties had repeatedly violated it, and thereby, the conflict escalated again, while no progress was made in negotiations.

Since 2015, Russia, Ukraine, the OSCE and other related parties have carried out multiple rounds of negotiations to resolve the conflict in eastern Ukraine, and supervised the implementation of the agreement. But none of these proved efficient. As the confrontation between the U.S. and Russia escalates, in particular, the abolition of the Intermediate-Range Nuclear Forces Treaty directly affects the strategic stability in Europe, and the turbulent situation in eastern Ukraine poses a threat to the security of Europe.

A breakthrough in the deadlock

Since Vladimir Zelensky was elected president of Ukraine in the spring of 2018, he has prioritized the settlement of the conflicts with the pro-Russian insurgents in the east, and he promised to end the confrontation between government forces and Russia-backed eastern separatists. This position was supported by France and Germany.

Since the Ukraine crisis, the U.S. and the European Union have imposed multiple rounds of severe economic sanctions on Russia, which not only caused damage to the Russian economy but also seriously harmed the economic interests of France and Germany. The developed European economies are facing an increase of economic risks caused by sluggish trade and manufacturing, slowing economic growth in Europe and disorderly Brexit coupled with trade tensions and weakening Eurozone activity.

In addition, the U.S.' withdrawal from the Intermediate-Range Nuclear Forces Treaty and plan to withdraw from the Treaty on Open Skies threaten the strategic stability between European countries and Russia, and exacerbate the deterrent confrontation between NATO and Russia. In this context, if Russia and Ukraine can resolve the conflict peacefully, there will be a breakthrough for easing the tensions among the major powers, and contribute to the improvement of the economic and security situations in Europe. Therefore, French and German leaders are actively engaged in diplomatic activities.

The Paris talks on December 9 will be based on a number of positive steps taken this autumn, including the exchange of prisoners of war between Ukraine and Russia, which signals a good tone for the Normandy summit.

Possibility of resolving the Russia-Ukraine conflict

Despite the increased diplomatic momentum in recent months, big obstacles remain before a lasting resolution is reached. The U.S., even excluded from the Normandy summit, it remains a major participant in multilateral diplomacy with Ukraine.

As a matter of fact, what's behind the Russia-Ukraine conflict is the gambling between Russia and the U.S. Although U.S. President Donald Trump is caught in a political scandal with Ukraine, the domestic consensus on supporting Ukraine has not been questioned, because providing military and economic aid to Kiev and making efforts to resist Russia on Ukraine's territory is the U.S.' fundamental diplomatic stance toward Ukraine.

Despite the U.S.' strong backing for Ukraine, some observers believe that the resignation of U.S. diplomat Kurt Volcker and the growing chaos in U.S. politics may cause Ukrainian President Zelensky to accept a negotiated deal with Russia. This will undoubtedly make it easier for Russia to maintain its military presence and political control in the two separatist enclaves in eastern Ukraine.

Against the backdrop of the political game among great powers, the prospect for resolving the Russia-Ukraine conflict at the summit is gloomy. The upcoming Normandy summit is more likely to make progress in smaller matters, for example, the Russia-Ukraine negotiations on the cross-border gas transit agreement expiring by the end of December, the exchange of prisoners of war, the relaxation of temporary front-line operations, and the economic ties with the separatist enclaves, which will help ease tensions in Europe.