OPINIONS Will Trump extort a price from NATO?

Will Trump extort a price from NATO? 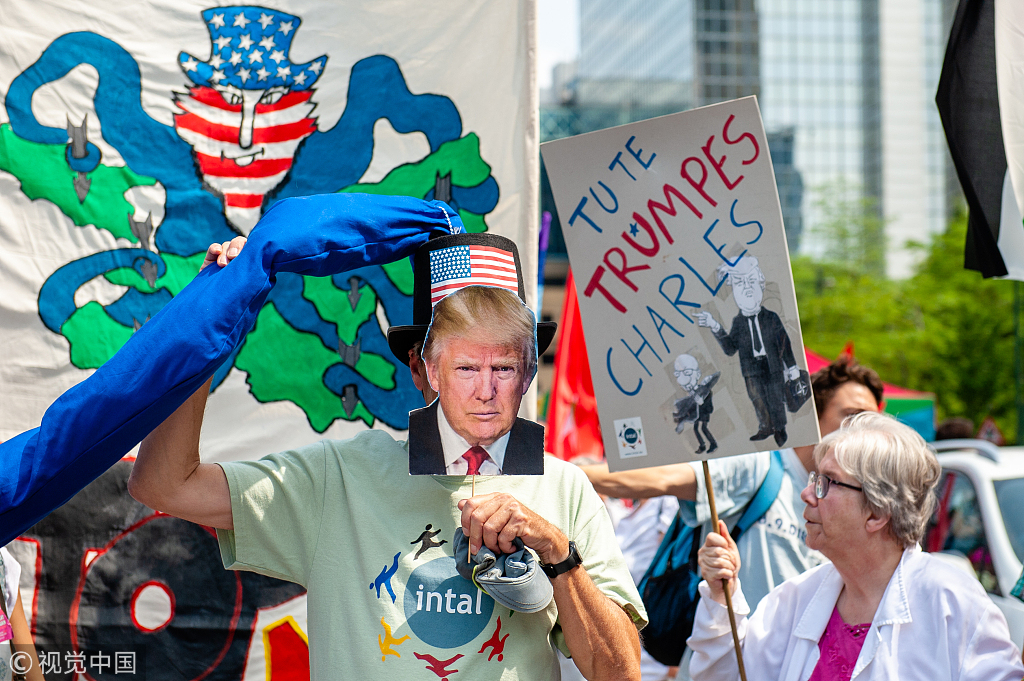 Thousands of people gathering in Brussels to protest organized by the Belgium platform 'Trump not welcome here' in on July 7. [Photo/VCG]

US President Donald Trump warned other NATO leaders the United States would alter the military deployment in European countries if they didn't increase their defense budgets, raising worries that the NATO summit in Brussels on Wednesday and Thursday could end like the G7 summit in Canada last month－in disorder.

The US has been exhorting other NATO member states to raise their defense budgets. In 2014, they inked an agreement that said 15 countries, or half of the NATO members, would spend at least 2 percent of their GDP on defense until 2024. According to latest data of NATO, in 2016 the US spent about $603 billion on defense, accounting for 3.56 percent of its GDP, with the defense budgets of the other 27 NATO members adding up to about $286 billion.

"By some accounts, the U.S. is paying for 90 percent of NATO, with many countries nowhere close to their 2 percent commitment … On top of this the European Union has a Trade Surplus of $151 Million with the U.S., with big Trade Barriers on U.S. goods. NO!" Trump tweeted on Monday.

In fact, upholding his "America first" policy, Trump has threatened to impose steep tariffs on EU and Canadian goods, in order to force them to accept his demands. Now he is using the same approach against the other NATO members, by implying he could pull US troops out of Europe if they didn't raise their defense budgets. And since his meeting with Russian President Vladimir Putin will be held soon after the NATO summit, this has rattled the other NATO members, particularly those in Europe.

Given that the defense budget is certain to top the agenda, the NATO summit may not yield positive results. True, NATO may not split in the near future, but strained relations between the US and the other members could significantly change NATO's strategic meaning and function.

The disagreements over defense spending raise a question: Can NATO continue to be a platform for the US to maintain its military supremacy? According to US Defense Secretary James Mattis, the "Indo-Pacific" region will become an increasingly important part of US strategy, where NATO's navy and air force cannot be of much help. Besides, the European NATO members believe the treaty's main function is to protect Europe from Russia, instead of maintaining the US-led Western order.

So far, NATO has developed in accordance with US requirements. But European NATO members have increased their defense expenditure since 2015. Also, Britain and France have redirected their focus on the Indo-Pacific region, corroborating the US' stance on the South China Sea issue.

Moreover, Washington seems intent on adjusting its military policy vis-à-vis Russia, and is using that as a bargaining chip with its EU allies. The US started withdrawing forces from Germany after the Sept 11, 2001, attacks. And the plan to pull more US forces out of Europe was part of former US president Barack Obama's strategy to shift US focus to the Asia-Pacific region, which was halted because of the Ukraine crisis. Trump has now resumed that strategy.

However, in order to ensure the pullout of US forces from Europe doesn't pose any immediate external threat to Europe, Trump has to offer Putin some concessions at their summit in Helsinki, Finland, on July 16. For instance, the US could lift some of the sanctions on Russia in exchange for Russia not using the US troop pullout to its advantage. If they make the deal, NATO and Russia will strike a new power balance in Europe, making it easier for NATO to focus on the Indo-Pacific region.

The author is an associate researcher at the Institute of American Studies, China Institutes of Contemporary International Relations.