The US and Turkey, a pair of fractured allies with deteriorating ties, are testing each other's bottom line in a hope to pressure the other side to compromise, but they are at the same time avoiding a hundred-percent hostility and crashing escalation of conflicts, a Chinese expert pointed out, as the two sides continued to fall apart amid new economic penalties. 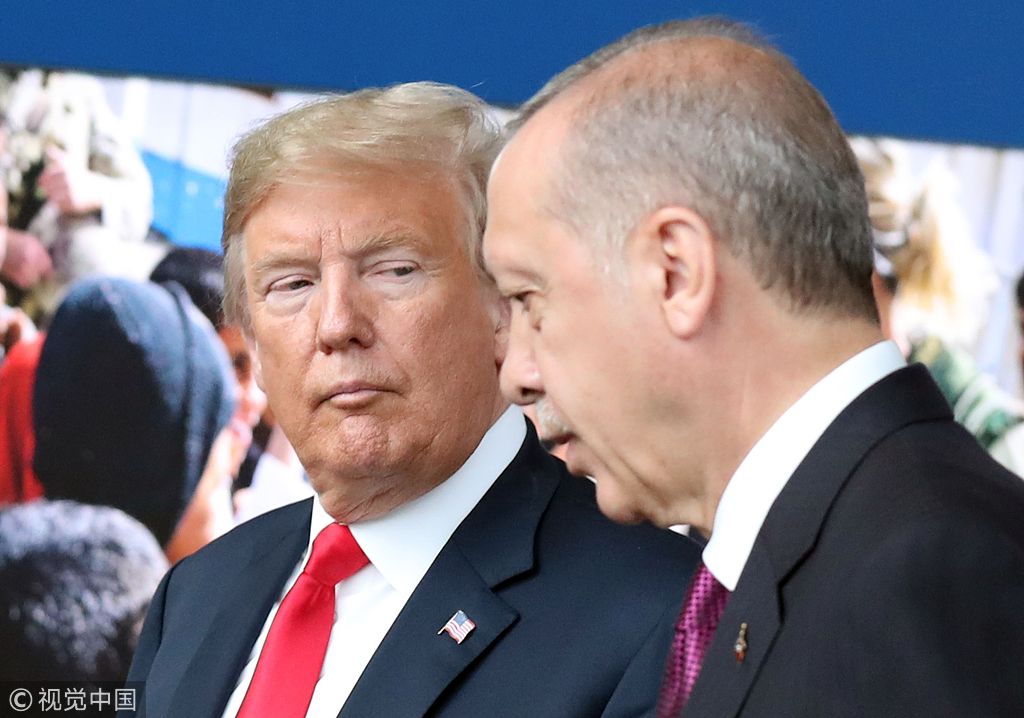 US President Donald Trump (L) talks to Turkey’s President Recep Tayyip Erdogan (R) as they arrive for the NATO summit, at the NATO headquarters in Brussels on July 11, 2018. (File photo: VCG)

Turkey, in an official decree, announced to raise tariffs on imports of US passenger cars to 120 percent, alcoholic drinks to 140 percent and leaf tobacco to 60 percent, Reuters reported on Wednesday, adding that tariffs were also increased on goods such as cosmetics, rice and coal.

Such a tariff policy was made shortly after Turkish President Recep Tayyip Erdogan announced to boycott US electronic goods.

On August 10, US President Donald Trump said he was doubling import tariffs on Turkish steel and aluminum, and tweeted that "our relations with Turkey are not good at this time," reported The Guardian. The Turkish currency lira plummeted by 17 percent against the US dollar on the same day.

The US-Turkey relations have been deteriorating since Fethullah Gulen, a Turkish cleric living in the US in exile, was blamed by Ankara for a failed coup in 2016. The situation got worse since this August.

In October 2016, an American pastor Andrew Craig Brunson was imprisoned in Turkey on the charge of masterminding a failed military coup against Turkish President Erdogan.

After repeatedly urging Turkey to release Brunson, Washington threatened on July 26 that it will launch sanctions against Turkey if Ankara fails to return the pastor, but was refuted by Ankara, who replied that sanctions and threats would not work.

The US-Turkey alliance finally encountered a huge challenge on August 10 when the US announced to sanction Turkey after a string of tit-for-tat war of words.

Trump's sanctions on Turkey are expression of dissatisfaction on the Erdogan administration's getting far away from the western political system and values, as well as the North Atlantic Treaty Organization (NATO) since 2016, said Sun Degang, deputy director of Middle East Studies Institute at Shanghai International Studies University, adding that the decision also serves the US midterm elections.

Since the end of World War II, the US has offered substantial military and economic aids to Turkey from 1947 with the enactment of the Truman Doctrine and Marshall Plan. A Turkey-US alliance was officially established after the former joined NATO in February 1952.

But after the 9/11 terrorist attacks, the bilateral relationship between the US and Turkey entered a transformation period under the impacts of wars in Afghanistan and Iraq.

The Erdogan administration proposed the strategic depth doctrine as its foreign policy after the Justice and Development Party (AKP) came into power, and set goals for 2023 when Turkey will mark its 100th anniversary, making the Turkish diplomacy more independent and diverse.

"The Erdogan administration doesn't want to be a pawn in the game controlled by the US and the western world, or a so-called "second class" NATO country. What it seeks is to be a bridge linking the East and the West, find a development path that suits its country and become a respectable nation, Sun told the People's Daily, explaining that it is the root cause for the US-Turkey conflicts.

The arrest of Brunson, according to him, is a fuse leading to deterioration of US-Turkey ties.

"It indicated that the US, who is on one hand manipulating Turkey to make profits in the Middle East, and on the other hand promoting a color revolution and regime change in its allies by Gulen movement and religion, is intolerable for Erdogan," Sun explained.

The US and Turkey are confronting each other over the strategic interests in the Middle East. Turkey is seeking close cooperation with the US rivals – Russia and Iran – on the Syrian issue, and objects the US for the latter's prevention of economic and trade relations between Turkey and Iran through unilateral sanctions.

Turkey supports Palestine and opposes Israel's expansion policies on the Israeli–Palestinian conflict. In addition, Turkey has captured the north of Syria and fought against the Kurdish ally of the US in Syria – the People's Protection Units.

Impacted by the announced sanctions of the US, the exchange rate of Turkish lira against the US dollar plunged on August 10, making the largest single-day decline since the 2001 Turkish economic crisis. The Turkish currency has fallen more than 40 percent this year.

The depreciation of lira, capital outflow, increasingly severe livelihood challenges, as well as sharpening social contradictions have placed huge challenges on the long-term governance of Erdogan.

Erdogan, in an article published on US media last Saturday, warned that the US-Turkey partnership could be in jeopardy if their relations remain tense, which will require his country to start looking for new friends and allies. But he also described Turkey as "strategic partner in NATO" of the US.

Turkey needs to improve relations with the West, especially the US, if it hopes to completely walk out of the economic shadow, analysts said, adding that the Trump administration will avoid pushing Turkey into Russia's arms.