When the exclusive documentary “Tianshan Still Standing: Memories of Fighting Terrorism in Xinjiang” was broadcast by CGTN on June 19, some viewers commented that it “reveals terrorism with blood and tears.” 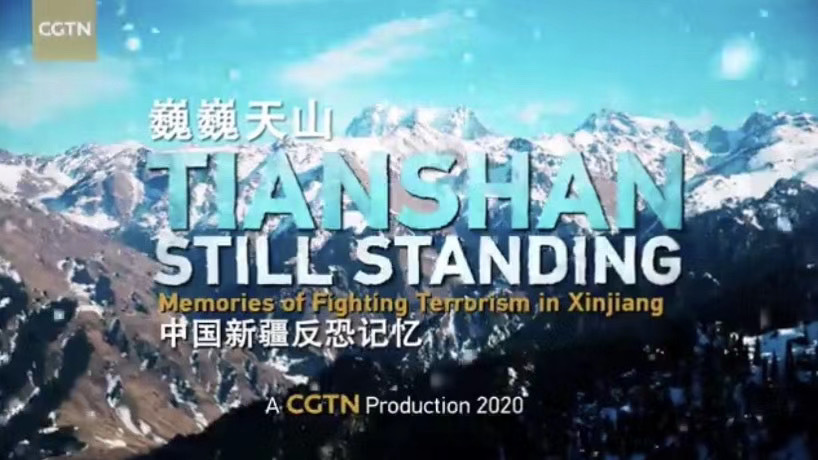 The documentary is powerful because it is real. It presents the astounding stories of those who defend peace, survivors and even people who have inflicted harm.

Over the past three decades, terrorist groups, such as the East Turkestan Islamic Movement (ETIM), have been manipulating Xinjiang locals, who generally have low levels of education, into perpetrating a number of terror attacks, resulting in a number of tragedies. It was only in the last three years that the violence has been prevented.

No violent terrorist attacks have occurred in Xinjiang for the past 40 consecutive months, and right to life and the right to the development of people of all ethnic groups in Xinjiang have been efficiently guaranteed.

“Those who have not watched the 60-minute documentary have no right to point fingers at Xinjiang’s counter-terrorism efforts,” some people said after watching the documentary.

The documentary is the third in a series released by CGTN. The previous two, which aired last December, have been played by more than 1 billion times. In non-English speaking countries such as Russia, Japan and some Middle Eastern countries, the two documentaries sparked heated discussions.

China is fighting against terrorism and extremism – the biggest threats to Xinjiang, remarked the website of Italian newspaper Il Giornale.

Regrettably, no mainstream Western media have covered the two documentaries. Despite constantly scrutinizing the Xinjiang issue, they have now collectively gone silent.

In addition, Youtube restricted viewer access to and removed the two documentaries for so-called violation of rules. At a press conference held by China’s Ministry of Foreign Affairs, when the spokesperson asked if any of the foreign correspondents present had seen the documentaries, none of them replied that they had.

The awkward response from the foreign media to the documentaries is confusing. Are these media outlets so shocked by the facts and truth that they don’t know how to continue lying to the world about the situation in Xinjiang? Or do the tragedies portrayed in the documentaries prove that those media outlets’ condemnation of the anti-terrorism and de-radicalization measures in Xinjiang is totally groundless?

As the Western world continues to criticize anti-terrorism and de-radicalization efforts in Xinjiang, they should watch the documentary in order to become less ignorant and have some respect for the lives of Chinese people. It they have ulterior motives, then they will definitely continue to pretend to be deaf and dumb on the issue.

We’ll see how they react.