OPINIONS With euro plunging against US dollar, Europe is pushed to the cliff

With euro plunging against US dollar, Europe is pushed to the cliff 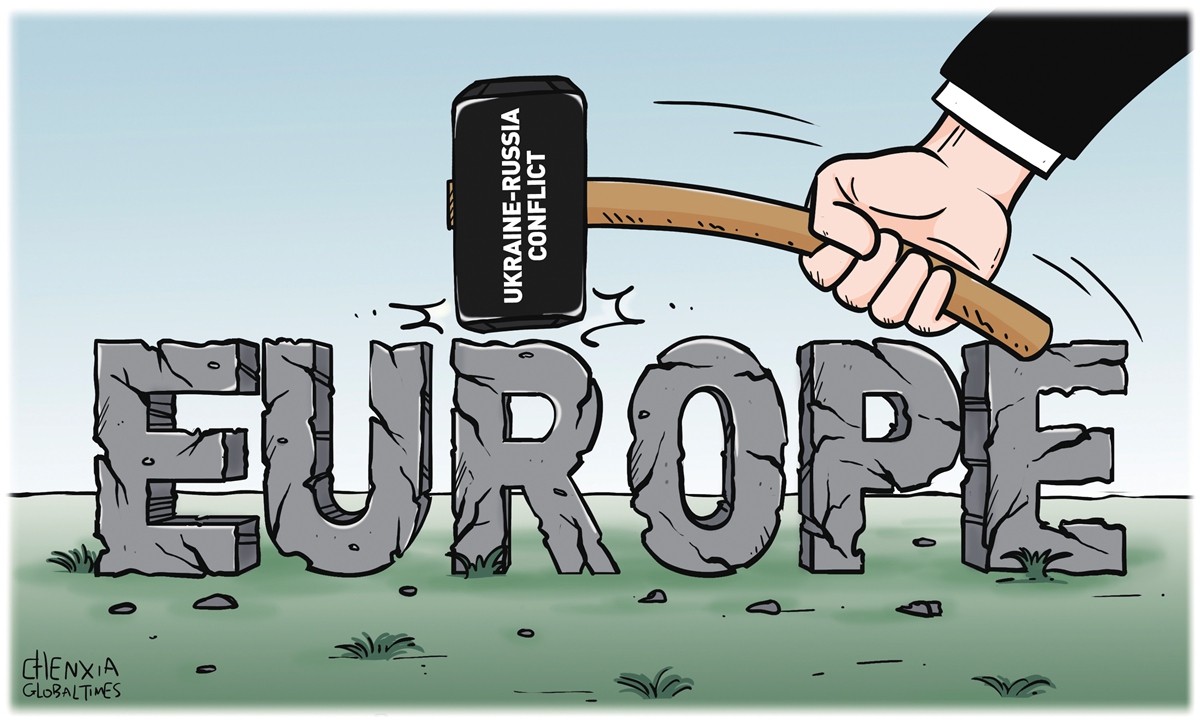 Ever since its inception in 1999 following the signing of the Maastricht Treaty, the foundation document for the EU, the euro, as the common currency used by all EU countries, has ricocheted against the US dollar in value. As the second most used international currency and once seen gaining popularity and importance, the euro has never ceased to be compared with the dollar.

Correspondingly, politicians in the US, concerned about the rise of the euro, have tacitly placed the euro in the crosshairs in order to defend and safeguard the dollar's role as the world's prime reserve currency in the international economic system and to prolong American hegemony.

Now, with the skyrocketing inflation, an energy crisis and exchange rate plunge, the Eurozone's economic outlook is becoming dimmer and increasingly uncertain. Put in another way, the EU has been pushed closer to the precipice.

The euro fell below parity against the dollar on July 13, hitting a 20-year low. Bearing the long-cherished wishes of many European countries, the currency was born with the faith to lead Europe toward closer financial, economic and political bond through monetary integration. However, a plunge of 19 percent in value against the dollar in the past 12 months, plus an impending recession across the Eurozone, seems to drive Europe into a precarious gully.

The euro supporters in the first place believe that the common currency-led European integration will reduce the risk of crisis, conflicts and wars, allowing European countries to resolve their problems through peaceful means. But, what the world is seeing today in Europe is precisely the opposite. There exists an undercurrent force that drives against European integration ever since the first day of the euro's birth, and the major pusher of that force is the US.

The euro has experienced several sharp falls in the past six months. Due to the US-led NATO's stubborn eastward territory expansion, Moscow felt is national security was endangered and the Russia-Ukraine military conflict erupted on February 24. After the escalation of that crisis, tens of billions of dollars of capital has fled Europe and flowed into the US.

Then, politicians in Washington, knowing perfectly well the "lethal point" of Europe, came out with a trump card, provoking the European countries to embargo Russian produced oil and gas. The sanctions-induced energy crisis, most severely felt in the EU countries, has unleashed heavy structural damage on the European economy, and it hit the euro hard. It remains unknown whether Moscow, furious and indignant against the US-led sweeping economic sanctions, retaliates and moves to block natural gas supply to Europe through the North Stream 1 in coming winter.

That damage is most felt in Germany, EU's leading economy. As a traditional industrial power, Germany has always maintained a trade surplus by exporting automobiles, machinery products, medicine and others valued added items. But the country experienced its first trade deficit in more than 30 years in May this year. The reason behind the deficit is the elevated energy prices that cut dearly into the country's industrial profit margins.

Simply put, the rise in export commodity prices cannot keep up with the rise in energy prices. About one-third of German workers are working in export-oriented enterprises, so it is not hard to imagine the escalating pressure on the country. Germany's current predicament has undoubtedly cast a heavy shadow over the overall European economy.

The energy crisis is increasingly chipping away at the future of the Europe. The Eurozone originally intended to promote digital and green transformation, but now, their worsening fiscal coffers are forcing the EU countries to focus on energy subsidies, which will inevitably dent the competitiveness of Europe in the coming months and years.

Facing surging inflation, the European Central Bank was forced to raise interest rates, which will put more pressure on an already weak European economy. Growing interest rates will increase borrowing costs across the Eurozone which will undoubtedly be a catastrophic blow for some highly indebted countries in the bloc. For example, Italy's debt to GDP ratio now exceeds 150 percent, and the rising interest rates will proportionately hike the risk of a debt default in the country.

Since the inception of the euro, whenever the development of the currency looks rosy, including being embraced by more central banks across the world, the US has always come out and assaulted the euro. No matter it was using financial tools or directly provoking a hot war in Europe, the purpose of Washington was to undermine European unity and weaken European economic integration.

The US knows how to squeeze a rival and sustain its globally dominating dollar. In 1999, promoted by the US, NATO bypassed the UN Security Council and illegally launched an air strike against the former Yugoslavia under the pretext of "averting a humanitarian disaster" there. As the war broke out, the market responded with the euro falling sharply against the greenback.

Currently, with the EU economies only recently emerging from a bruising coronavirus pandemic onslaught, the US, using the hands of NATO, provoked another hot conflict in the center of Europe. Washington has vowed to weaken Russia in public, but there is another untold boogeyman - hitting the EU economy and defeating the euro.

A deteriorating and weakened Europe is not in China's interest, and is never what China aspires to see. Three major Chinese airlines' latest move to buy 292 Airbus planes and Beijing's move to reduce its total holdings of US Treasury bonds this year could be considered as a boon to Europe and the euro. China does not want to see Russia weakened, either. After all, a multipolar world is more stable and secure than one gripped by a single superpower.