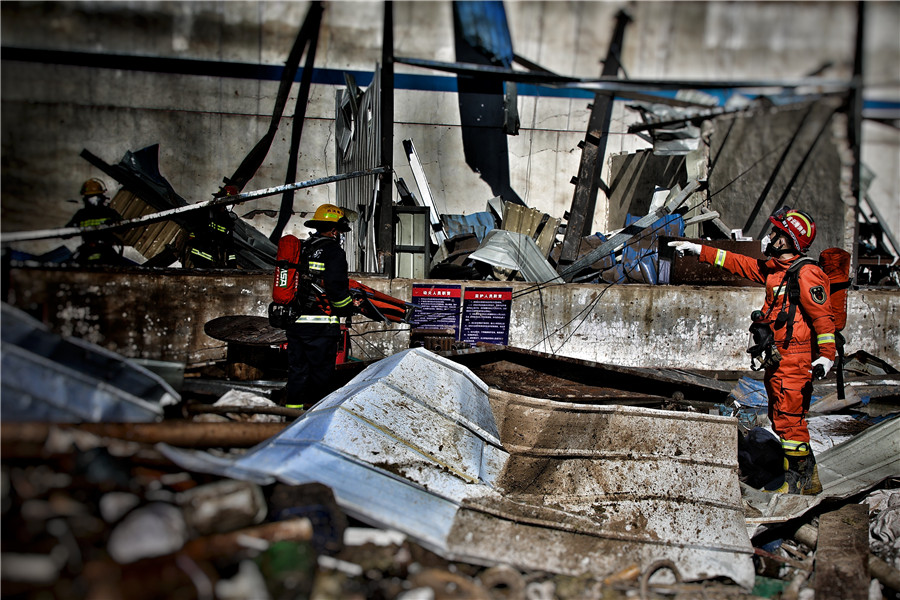 That China Earthquake Networks Center said a quake measuring 2.2 degree with its focal point at Tianjiayi Chemical Co plant shook the Xiangshui county of Yancheng, Jiangsu province, at 2:48 pm on March 21 means the tremor, most probably, was caused by the explosion in the chemical plant that has claimed 78 lives and left 41 seriously injured.

Although the investigation is still underway, evidence gathered until now suggest the explosion, which razed a 2-square-kilometer area in the Xiangshui chemical industrial park, was caused by potential hazards that the work safety supervisory departments had identified and warned against but the chemical plant ignored. For example, the plant’s casual handling of solid chemical waste could have triggered the chain of blasts. Ironically, the work safety inspectors sent by the Yancheng city authorities to inspect the plant just before the explosion occurred were also injured.

The plant produces about 4,500 tons of solid waste a year, some of which are highly toxic and combustible. Worse, they are piled up near large chemical tanks and a natural gas station — where witnesses reportedly first spotted the flames leading to the explosion — before being transported away.

Local residents have lived with the safety challenges near the industrial park for years. Way back in 2007, eight people died in a blast, and in 2011 a gas leak killed four and forced tens of thousands of people to flee the neighborhood.

The huge input from various levels of governments to save lives, clean the environment and comfort the victims’ families has been in stark contrast to the proverbial lull before the storm in the industrial park.

Perhaps the fact that the industrial park contributes to one-sixth of the county government’s revenue and has been a major job provider could explain why the county authorities might have turned a blind eye to the safety loopholes and lax environmental protection measures.

The priority now, however, is to clean up the area, reduce the air pollution and ensure that local residents are not subjected to any more inconvenience. The air quality, in fact, had returned to the national standard level by Wednesday. Now, as the State Council Work Safety Committee said after the blast, all-out efforts should be made to identify and remove the hidden dangers associated with the use of hazardous chemicals.

As the real executors of instructions of superior departments, if the county authorities do not fulfill their duties due to short-term interests, all safety regulations will exist only on paper. And their indecisiveness when it comes to choosing between short-term growth and high-quality, long-term development would slow the pace of the economy’s transformation from quantitative growth to qualitative development.