OPINIONS World has had enough of US bullying

World has had enough of US bullying 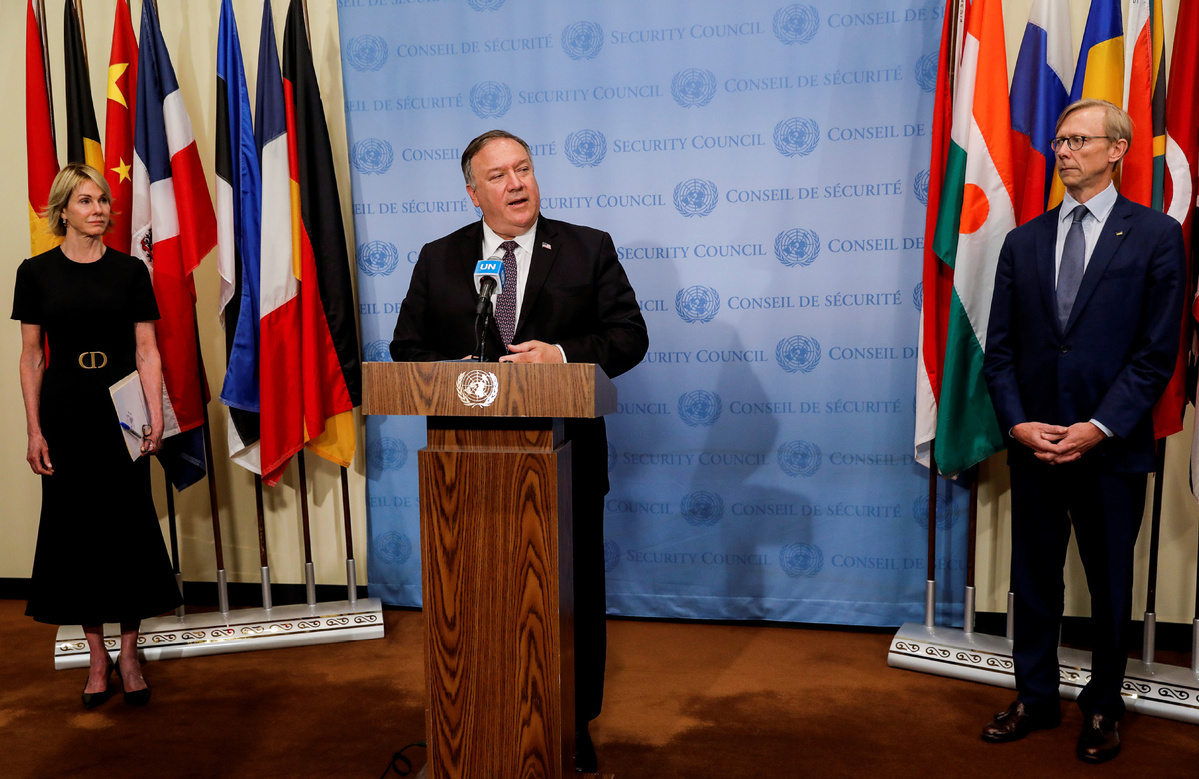 US Secretary of State Mike Pompeo is flanked by US Ambassador to the United Nations Kelly Craft and US special representative for Iran Brian Hook as he speaks to reporters following a meeting with members of the UN Security Council about Iran's alleged non-compliance with a nuclear deal and calling for the restoration of sanctions against Iran at U.N. headquarters in New York, US, August 20, 2020. (Photo:Agencies)

The latest response from Washington shows the world's sole superpower is nowhere near learning the lessons of the universal isolation it finds itself in after it failed to get a green light from the United Nations Security Council over its resolution to restore all pre-2015 UN sanctions against Iran.

Despite its resolution on heightening Iran sanctions receiving only two "yes" votes at the UNSC on August 13, the US has stubbornly decided to go it alone. Its high-handedness has only triggered more opposition, even from its close allies, with the United Kingdom, France and Germany issuing a joint statement on Thursday, rejecting the US plan.

Yet in the face of such unprecedented near universal isolation, US Secretary of State Mike Pompeo and US special envoy for Iran Brian Hook still had the nerve to criticize and question the motives of those countries that have objected to the US move.

Displaying the US arrogance and overbearing style, Hook said in a media briefing on Friday that "We don't need anyone's permission" and insisted the US has already started a 30-day countdown to initiate the "snapback" of penalties as "Iran is in violation of its voluntary nuclear commitments".

True, the 2015 Iranian nuclear deal, endorsed by the UNSC in resolution 2231, does have the snapback provision. But it seems the US is the only country in the world that considers Iran to have violated the deal. Not to mention that Iran's compliance with the deal was confirmed by the UN's own nuclear watchdog.

Still, this is not the most absurd part of the US' unilateral action to reinstate all the previous sanctions on Iran. The current US government has behaved like it has developed amnesia: It is no longer a party to the Iran deal as US President Donald Trump withdrew the US from the deal in May 2018.

So on what basis has the US revoked the provision on the Iran nuclear deal when it is no longer a party to it? How can it put itself above the UNSC in deciding whether Iran has complied with the multilateral agreement?

As such, the ongoing US skirmishes with the rest of the world community over Iran are nothing but the latest demonstration of US hegemony. Driven by the US administration's "America first" doctrine, the US is increasingly behaving like a bully in international affairs.

It has not only defied international norms and international treaties but also freely imposed its own will on others. The world has had enough of US bullying, and the overwhelming opposition to the Iran issue may signal the beginning of more concerted efforts from members of the world community to oppose the US administration's unreasonable demands elsewhere.