World must prepare for more chaos as Trump seeks re-election 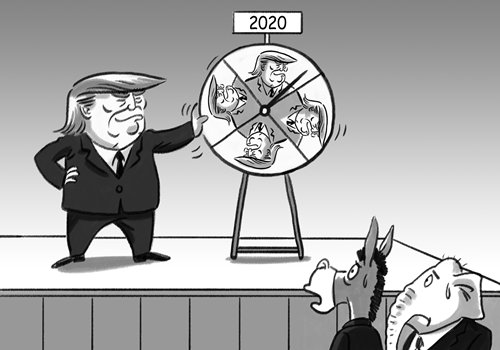 US President Donald Trump confirmed last week that he will run for re-election in 2020. The news does not come as a surprise. But many countries are concerned about being kidnapped by the US system and the price they have to pay for US electoral politics.

The US, in recent years, has been thrust into the media limelight for its societal splits and political uncertainties. Chaos has bred radical policies, which, in return, has aggravated political divisions in US society.

Since assuming office, the Trump administration has astounded the international community by his capriciousness - withdrawing from multiple international pacts, threatening a worldwide trade war and trashing a slew of well-run policies by the Barack Obama administration. Acutely aware of vulnerabilities in the US political system, Trump is taking advantage of US political maladies to win more votes - the main reason for his erratic way of governing.

China, US allies and even the world trade system have been used as a tool by the Trump administration to win a second term in office. For a long time, US presidents have strived to win votes by attacking China, and in recent years, US elections have been permeated with rumors and conspiracies.

While China and the international community are working jointly to promote economic globalization for the well-being of the whole world, gaining votes is the Trump administration's ultimate purpose in his capricious governance.

Trump may beat all his rivals and be elected again in 2020. Bernie Sanders, sitting at the top of the Washington Post's list of potential 2020 Democratic presidential candidates, has been slammed for his democratic socialist principles for some time. It's still too early to speculate the outcome of the election to be held two years later, but there is a likelihood that Trump, although a target of constant bombardment by the US media, will secure more votes from everyday Americans with his capricious policies. This result will no doubt bring more uncertainty to global order, but this is how US politics works.

While the international community has been striving to find a way to tackle Trump's erratic way of handling international affairs, the world must be aware that this new form of US governance may become even more capricious in the future. This is induced by US bipartisan politics and no party has the capability to alter this trend. Undeniably, US electoral politics is the root for the chaos Trump brought to the country and the entire world.