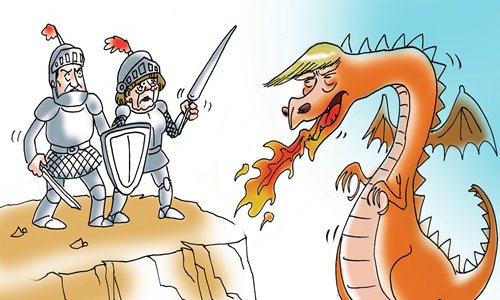 International relations are in a constant flux. Since the end of the Cold War, the West has been defending a liberal international order and the political conception of "the end of history" has made a massive clamor across the international community. US-European ties were perceived as an ironclad block supporting open trade, freedom and democracy. Nonetheless, the War on Iraq bred discord between them but did not shake the core of the West-dominated international order. Since the global financial crisis in 2008, both Europe and the US have been confronted with a multitude of socio-economic conundrums and the international order they have been safeguarding is falling apart, giving rise to a number of emerging economies. Donald Trump's victory in US presidential elections in 2016 became the last straw to make US-European cooperation crumble. Bilateral relations are facing more severe challenges and possibilities of rupture and realignment.

The US' ties with Germany are an important link in its European relations. But during the first year under Trump, Washington-Berlin ties have been changing from a state of democratic alliance to one of fierce rivalry, which is actually a new normal in the Western camp. A slew of Trump's foreign policies, including his withdrawal from the Paris climate accord, stress on trade protection and opposition to globalization, have gradually coalesced into an important force of the unfolding trend of anti-globalization.

For many European leaders including German Chancellor Angela Merkel, Trump's policies and ideas lack political correctness, which are just unacceptable. In addition, the two heads of state failed to reach consensus on trade, security and rule-making cooperation several times, which signals an impending breakup between Washington and Berlin as well as a wider Europe.

In recent years, the Davos Forum (World Economic Forum) has evolved into a stage for major world stakeholders to interpret their development visions. This year's forum has gained wide attention.

On the other, Trump will be the first incumbent US president to appear at the forum since Bill Clinton, but it seemed that he did not match the atmosphere of the forum. Merkel announced she might attend the annual meeting later this month after a two-year absence. If she makes it, she and Trump are once again likely to squabble in public.

Themed "Creating a Shared Future in a Fractured World," this year's forum will focus on free trade, climate change and international cooperation, all of which are subjects of dispute between Merkel and Trump. It is expected that Merkel and French President Emmanuel Macron will have close-door meetings with Trump in Davos. The encounter between "cosmopolitanism" and "communitarianism" behind the bout between globalization and anti-globalization will be the biggest highlight of the economic gathering.

The interaction between Merkel and Trump will be another focal point in the development of US-European ties. Trump will try to use Davos to ramp up his international position and influence in a bid to attract more support amid vehement censure of his policies.

Merkel was once viewed by Western media as the last defender of liberal and democratic values and a keeper of the West-dominated international order. However, she cannot make it on her own. The once intimate Berlin-Washington bond has now loosened. The only good sign for Europe is that Macron, a defender of the European Union (EU), free trade and a rule-based international order, took office as French president. He is a natural ally of Merkel.

The two leaders have cooperated on various occasions in EU reform and on the world stage. So the forum will provide another opportunity for cooperation between Merkel and Macron.

In Davos, Merkel will probably forge an alliance with Macron to counter Trump's anti-globalization policies and express EU's support for globalization to the rest of the world. For Merkel, participation in the forum will help re-establish her authority and influence across Germany to gain leverage in forming a new coalition. Furthermore, it will help empower Europe, especially Germany, to return to the world stage and better tackle a post-Brexit EU.

The appearance of Merkel and Macron at the World Economic Forum is aimed at supporting a multilateral framework, deepening global and bilateral cooperation and projecting Europe's role in global governance. If they can successfully spread their ideas and methods of governance, Trump's influence will be further weakened, which will likely put pressure on the US leader to change his policies.

However, it seems the American president will not change his concepts and policies, which will further sour the relations between the US and Europe and weaken the West-led international order.