World's most daring monetary experiment powers on with Abe's win 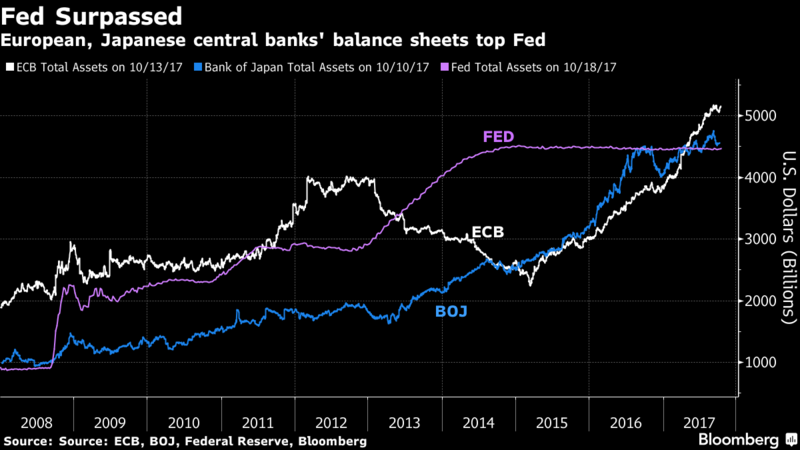 Prime Minister Shinzo Abe’s solid election win green lights a continuation of the Bank of Japan’s massive economic stimulus, entrenching a divide with global peers who are either heading in the opposite direction or mulling moves to do so.

While growth in the world’s third-largest economy has picked up, inflation remains nowhere close to the BOJ’s 2 percent target. Continued easing means Japan should remain a source of liquidity for the world economy and especially emerging markets in Asia that are vulnerable to rising interest rates.

"Globally, the BOJ’s continued policy accommodation should help cushion the blow from the Fed’s balance sheet normalization and the ECB’s expected tapering next year," said Frederic Neumann, co-head of Asian economics research at HSBC Holdings Plc in Hong Kong. "The BOJ will not be able single-handedly to keep rates low everywhere, but its commitment to continued monetary accommodation should restrain any possible global yield rise."

Indeed, a sharper divergence between its policy outlook and the rest of the developed world may aid the BOJ’s cause should the yen continue to weaken, helping to accelerate inflation by making imports pricier. The yen slumped to its weakest since July on Monday and shares moved higher as markets digested Abe’s landslide.

Naohiko Baba, chief economist for Goldman Sachs in Japan, noted in a report on Monday that "the largest tangible result" of Abe’s commitment to the very ambitious inflation target has been to keep the yen weak and boost equities. The currency has declined more-than 20 percent since Abe took office in December 2012, while the Nikkei 225 Stock Average has roughly doubled.

Former BOJ board member Sayuri Shirai said Abe’s win will make it harder for the BOJ to scale back its stimulus. She said the yen could weaken further to around 120 per dollar following the election result and amid expectations of U.S. tax reforms.

Although opinion polls in the last week had pointed to Abe’s victory, the scale of his mandate and what it meant for the BOJ was far from assured. Had the ruling coalition lost a significant number of seats, Abe’s position as Liberal Democratic Party chief could have been endangered, and with it the monetary policy he ushered in under Governor Kuroda.

Abe’s policy prescription has no shortage of critics. Internal Affairs Minister Seiko Noda, who has openly said she plans to challenge Abe for the party presidency next year, in August expressed concern about the BOJ being able to unwind its monetary stimulus, according to a report by Kyodo News. Taro Kono, another potential rival, said in April, "we’re asking for communication" from the BOJ about how it’s going to exit from easing.

With the BOJ’s balance sheet approaching almost the entire size of the economy, questions over the sustainability of Japan’s policies likely won’t go away. But Abe’s re-election means critics will remain sidelined for a while longer at least.

"Though notionally independent, the BOJ has been a keen participant in the Abenomics project," said Rob Carnell, chief economist for Asia at ING Bank NV in Singapore. "Abe’s victory says carry on!"