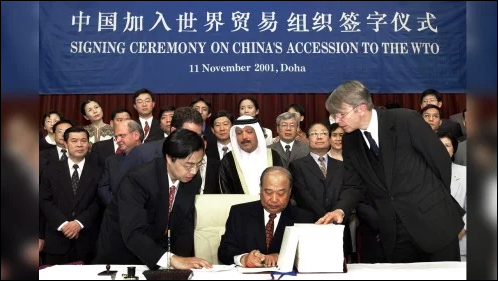 Kevin Hassett, one of US President Donald Trump's top economic advisers, suggested there could be a case for "evicting China" from the WTO, BBC reported. The US seems to want to mobilize its partners to besiege China in the WTO. But no threat can frighten China's government or its people. It would instead only make China grow stronger.

It is hard to imagine what the WTO would be without China. At the very least, the organization could not ensure that it is representative if it loses the world's largest trading country. Such a move would have a bad demonstration effect for other emerging economies and cause economic disarray around the world.

In 2001, China joined the WTO, which helped the country become the world's second-largest economy after the US.

The WTO has been a huge success for China, and the country's accession has also been an enormous success for the organization.

China fulfilled all requirements to join the WTO, actively opening up its economy to the world. It is estimated that the contribution of China's economic growth to the global economy will remain at roughly 30 percent.

Talk of evicting China from the WTO is presumptuous and ridiculous. It would be a severe blow to the global economy if China were to leave the organization.

The US won't be able to do what Hassett has said. There is no need to take Washington's threat too seriously.

What lies behind Hassett's words is Washington's intent to create a tense atmosphere. Although most Americans are still optimistic about the US economy, a recent slide in the stock market has made some people anxious.

Washington may want to use populist sentiment to divert attention and seek scapegoats. China seems like an excellent target, giving Washington an excuse to plead not guilty. China will not be afraid of US threats and fall into the trap.