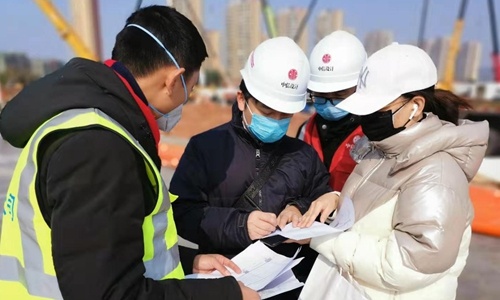 China would like to share all its experience in designing Wuhan's hospitals to countries in need, said a technical expert that worked on the Huoshenshan Hospital, the emergency field hospital for treating COVID-19 patients that had been constructed within only 10 days in Wuhan, Central China's Hubei Province.

Xiao Wei, deputy director of the CITIC General Institute of Architectural Design and Research and coordinator of the technical support team for the construction of the field hospital, told the Global Times that they have received requests about building similar hospitals from some countries, and might cooperate with these nations on some epidemic prevention projects.

"We are pleased to participate in these projects abroad and share our wisdom and designs with the world," he said.

According to Xiao, the original blueprints and drawings of Huoshenshan hospital have been made available to the public, keeping some dishonest companies from using fake blueprints to cheat clients. He also said that the authentic blueprints proved that the claim made by some media outlets that Huoshenshan Hospital was designed by a Japanese designer was false.

However, although the resources and experience from China have been made available to the world, the standards for building hospitals vary from country to country and the successful cases of building a hospital within 10 days cannot necessarily be replicated 100 percent.

"The standards of building a hospital for curing infectious diseases when it comes to its structure, energy conservation, building materials and many other aspects are different between different countries. Although we have made the blueprints available, other countries still need to take time to make some adjustments that are in line with the conditions in their own countries," Xiao said.

The Huoshenshan Hospital was based on the design of the Xiaotangshan Hospital in Beijing, which was built to treat SARS patients back in 2003, with some adjustments and improvements made to the design to accommodate the local climate in Wuhan, construction speed, 5G technology, the ventilation system and isolation measures to protect medical staff and patients.

For example, considering that the hospital was going to be built near a lake, the team added an anti-seepage membrane to isolate the entire hospital from its environment, ensuring that any medical waste would not contaminate the lake or soil.

The hospital also included 5G coverage and wired broadband, which were used to connect to a remote consultation platform that had been set up so that experienced doctors in other provinces around China would be able to conduct remote consultations with patients in Wuhan. He added that the livestreaming of the construction of the hospital and the millions of Chinese viewers played an important role in giving staff the encouragement they needed to complete the difficult task.

"It is unbelievable to see that millions of people are supervising your work online. Some suggestions from Chinese netizens were good, but due to time constraints we couldn't implement all their suggestions."

Xiao is scheduled to introduce the design of the Huoshenshan Hospital later this year to the China Pavilion at the Venice Biennale 2020 themed on Courtyards: From Big to Small, How We Live Together. A juxtaposition of Huoshenshan Hospital and the legendary Imperial Palace will show the connections between the two that are rooted in Chinese architectural philosophy.

According to Xiao, the biggest challenge they faced when building Huoshenshan Hospital was time. Usually, it takes almost a year to design a hospital due to the sheer amount of research needed.

However, the great urgency this time did not allow them to follow their normal routine. They only spent 60 hours drawing up the blueprints for the Huoshenshan Hospital constantly making adjustments as they learned more about the site.

The design team was divided into two parts: One is dedicated to design and the other to cooperating with workers at the construction site. The members of both teams were top designers and engineers in various fields including water supply and heating. Their experience and knowledge allowed them to cooperate and quickly make decisions on what problems could be solved right on the spot. They also shared their evolving experience with the team in charge of building the Leishenshan Hospital, the sister field hospital constructed after Huoshenshan.

Xiao said he was impressed by how companies shouldered their responsibilities during this crisis. They contributed all of their best resources such as medical equipment, televisions and air conditioners and delivered them to the hospital on time, which helped with the construction immensely.

"Building the Huoshenshan Hospital in just 10 days is a unique accomplishment in the world. It shows China's highly improved construction ability and that Chinese enterprises have very strong capabilities in logistics, which other countries may not be able to replicate," he said.

Xiao said that the project allowed him to feel the spirit of the Chinese people. He said he feels that the hospital should be converted into an exhibition center or a museum so others may feel this spirit as well.

"It might be a good idea to change the Huoshenshan Hospital into a museum to show the stories that happened there and convey the spirit of the Chinese people as they can unite to fight against the rampaging novel coronavirus."

He was also moved by the workers who spent days and nights building the hospital during the Chinese New Year holiday and the sense of responsibility of those large state-owned enterprises which participated voluntarily without consideration of reward.

"The workers are great people. I think it is very important that an ordinary person can stand up and offer help at a special time like this. This is our Chinese spirit, and we used that spirit to make a global miracle."