The stage is set for one of the most awaited summits of the year with the formal announcement of the dates of Chinese President Xi Jinping's visit to India. The meeting between Indian Prime Minister Narendra Modi and President Xi on October 11-12 in Chennai will be the second informal summit between the two leaders after the first one in Wuhan in April last year. The meeting takes place after a year and half of intense bilateral exchanges during which we have seen progress in the consensus between the two leaders to enhance strategic communication, expand cooperation, deepen mutual trust and build mutual understanding. 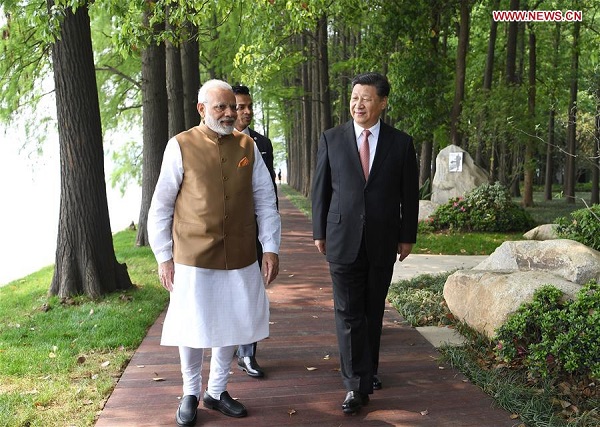 Relations between India and China are not only steeped in history but also intensely current. It is a dialogue between ancient civilizations with a long history of exchanges that resonates even today. It is also a partnership between young nation states that have traversed difficult historical phases and are now preoccupied with addressing the needs of their similarly aspirational societies. The international commentariat is wont to label us as emerging economies, unmindful of the fact that at the dawn of the 19th century India and China accounted for half the GDP of the world. Two countries of a billion plus population each, endowed with ample natural and human resources, are not only entitled to but also bound to find their natural position in global affairs. The fact that both are rising simultaneously is in the natural order of things.

Today, India and China are at a unique and important juncture in our shared history. We are looking to transform and deliver fully on the promise of a better life for our citizens at a time when the world order is in flux. With the rise of multiple growth centers, the stress on traditional frameworks of global governance and the emergence of challenges that no single country can tackle by itself, the relationship between India and China becomes even more important. How successful we are in ensuring that our growth is mutually reinforcing and that our partnership is a factor of stability in an ever changing world will determine the realization of our shared vision for this century to be an Asian Century.

This is the context in which the second informal summit between Prime Minister Modi and President Xi will take place, in the historic setting of Mamallapuram near Chennai. The mechanism is a new and unique contribution to bilateral diplomacy as it allows both leaders to have quality and in-depth exchanges on a wide range of issues. Frequent meetings in recent years have led to excellent personal chemistry between them and both are strong and popular leaders in their own right.

Given the "informal" nature of the meeting, there is no set agenda and the leaders are free from the shackles of structured dialogues that form part and parcel of high-level summitry. It would therefore be presumptuous to hold forth on what the leaders would discuss. However, we can expect the leaders to review the progress since Wuhan and look to broaden the areas of convergence on bilateral, regional and global matters. They can also be expected to give guidance to officials on moving forward on critical issues and addressing areas where differences still persist.

Our leaders look at the India-China relationship from a strategic perspective and seek to put it on a stable footing. In this regard, the preservation of peace and tranquility along the India-China border is critical to the steady progress of the relationship in all other areas. The unresolved border is often seen as a significant fault line in our relations, but not enough credit is given to both countries for the maturity they have shown in handling this issue, which has ensured that this long and unresolved border has remained peaceful for several decades. While differences between two large neighboring countries are only to be expected, we must not, as agreed by our two leaders in Wuhan, let those differences become disputes. Sensitivity to each other's core concerns is another important aspect of this basic recipe for building mutual trust and confidence.

India and China have witnessed a significant expansion in trade and economic ties in recent years with bilateral trade reaching $95 billion in 2018. The very large deficit, however, that faces India in this trade is a matter of economic and political sensitivity in India and needs to be addressed urgently. It is hoped that recent progress in securing market access for a number of Indian agricultural products will translate into actual import of these products from India. It would also be a perfect example of win-win cooperation if China were to provide greater market access and regulatory clarity to Indian pharmaceutical products and IT/ITeS services, which are globally well regarded. Generic Indian medicines have the potential to significantly reduce the medical expenses of the average Chinese household, preventing the kind of situation depicted in last year's runaway hit movie Dying to Survive, in which a character had to illegally smuggle medicine from India. Indian IT too can offer Chinese companies cost-effective solutions as they look to compete in an increasingly competitive global market. India also remains a very attractive destination for Foreign Direct Investment (FDI). In recent years, several positive measures have made it easier to do business in India and more Chinese investment is welcome across a range of sectors.

While there is growing public awareness and interest in India and China about each other, there is a strong need to rekindle age-old contacts and address the paradox of limited people-to-people contact in our relations. As the world's two most populous countries with cultural linkages that date back to ancient history, the number of visits to each other's countries remains abysmally low. China is the world's largest outbound tourism market and India is a neighbor with innumerable tourist products. With the opening up of the Indian electronic visa (e-Visa) facility to Chinese nationals since May 2015, we certainly look forward to many more visitors from China.

In Wuhan last year, our leaders also directed the setting up of a High-Level Mechanism on Cultural and People-to-People Exchanges led by the foreign ministers of both countries. The mechanism has already held two meetings and has identified 10 areas of cooperation, many of which will take center stage next year as we celebrate the 70th anniversary of our diplomatic relations from April 1, 2020.

Both India and China appreciate the fact that cooperation between them can be a powerful multiplier to their simultaneous rise whereas confrontation would be a net negative for both countries. It has been said that the historical trajectory of India-China relations has been 99 percent positive and only 1 percent negative. The choice of what to focus on - positive or negative - is entirely ours.

After months of intense preparations, with the stage set for the second informal summit and with a desire to build a partnership free of the constraints of doubt, hesitation, contestation and claims, Chennai promises to be another important milestone in bilateral relations.

The author is India's Ambassador to China.