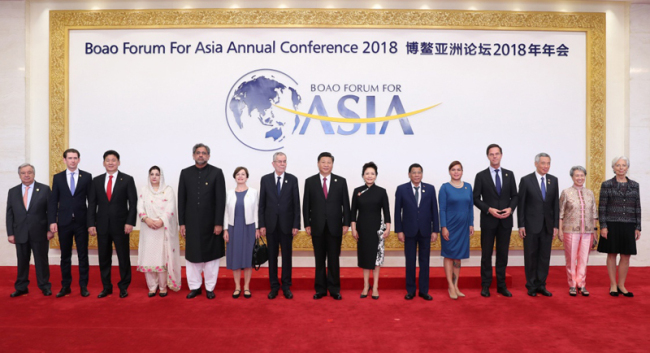 President Xi Jinping's speech at the Boao Forum for Asia has been warmly welcomed as a sign of China's continuing embrace of globalization and free trade, and its opposition to isolationism and protectionism. Stock markets around the world responded positively. But there's a danger of misinterpreting the measures announced by President Xi as concessions in the face of pressure from the United States in the ongoing trade conflict.

For those of you who are not closely following the story of China's development, reform and opening up has been a fundamental national policy for the past 40 years. Xi's latest speech represents another step forward in China's ongoing efforts to deepen reform and the opening of its economy.

China has achieved some stunning success over the last 40 years through its opening up to the outside world. It has lifted 800 million people out of poverty. It has become the second-largest economy in the world. It boasts the largest holding of foreign reserves, and is the world's largest trading nation for goods.

In the high-tech sector, China's progress has been equally impressive. For example, it now holds the world's largest number of Blockchain patents, beating out developed countries such as the United States and Japan.

In his speech at the Boao Forum, Xi proclaimed that "China will stick to its basic state policy of opening up, improve its investment climate, and protect the lawful rights and interests of investors." In line with this goal, Xi announced a raft of new measures to support China's economy, including significantly reducing tariffs on auto imports.

Responding to President Xi's speech, President Trump seems to be happy, tweeting that: "Very thankful for President Xi of China's kind words on tariffs and automobile barriers... also, his enlightenment on intellectual property and technology transfers. We will make great progress together!"

At the same time, some sections of the American media have portrayed Xi's speech as being a concession to recent pressure from the United States. But if you go back a little further, you'll see that China's policy of reforming and opening up has been consistent – not a temporary response to President Trump's actions in his trade dispute with Beijing.

Speaking in Davos back in early 2017, Xi said that "an open door allows other countries to access the Chinese market and China itself to integrate with the world," and that "China is committed to a fundamental policy of opening-up and pursues a win-win opening-up strategy."

In that famous speech, he also vividly explained why protectionism is bad for everybody. "Pursuing protectionism is like locking oneself in a dark room. While wind and rain may be kept outside, that dark room will also block light and air. No one will emerge as a winner in a trade war."

In another critical policy speech in October during the 19th National Congress of the Communist Party of China, Xi stated that "openness brings progress, while self-seclusion leaves one behind. China will not close its door to the world; we will only become more and more open."

"Openness" has been one of the buzzwords for other Chinese leaders too. Premier Li Keqiang, speaking to some 3,000 delegates at the National People's Congress in March, said that "faced with new changes in the international environment… we need to further refine our strategic plan for opening up, work faster to build new systems for an open economy, and drive China toward both deeper and higher level opening up."

Since the congress, China has launched sweeping intuitional reforms involving some 80 ministries or ministry-level agencies, which has included the creation of the State Administration for Market Regulation. The aim of the new regulator is to remove systemic and institutional obstacles that prevent the market from playing a decisive role in the allocation of economic resources.

After Xi's speech at the Boao Forum, White House Press Secretary Sarah Huckabee Sanders said "we want to see concrete actions from China … we want to see more than just the rhetoric." This echoes the argument of many media outlets in the United States, who seem to have expected more specifics from Xi's speech.

There are two problems with how they are looking at Xi's Boao Forum speech.

The first is to assume that Xi will talk about concrete reform measures in a speech to an international audience like the one at Boao Forum. This is a job reserved for the Premier or government ministers, or ever lower level officials. And it's ordinarily reserved for an event with a domestic setting.

And second, they seem to be suggesting that Xi's speech is a sign that China will grant concessions to the United States. China is fully prepared to fight back in a trade war with the United States, if it is imposed upon them. China appears to be fully confident that Washington is not going to win the war. China's ambassador to the United States, Cui Tiankai, said, "If people want to play tough, we will play tough with them, and see who will last longer."

If the hawks inside the Trump Administration mistook the measures announced in Xi's speech as a sign they can retched up pressure on Beijing for their advantage, that'll quickly find themselves at a dead end when it comes to resolving their trade dispute with China.

China is opening up according to its own pace and schedule. Unilateral action, pressure, and coercion will not beget anything productive to avoid a trade war.