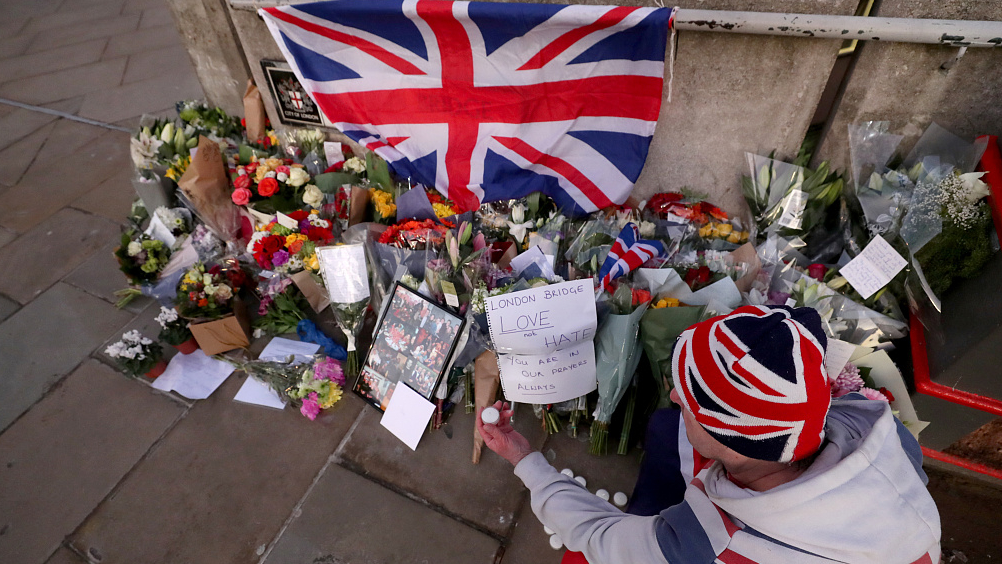 A man lights a candle in front of placards and tributes to victims on London Bridge in London, the UK, December 2, 2019. (Photo: VCG)

As the world is mourning the innocent lives lost in the London Bridge terror attack, why such a murderous rampage took place in the highly civilized United Kingdom deserves public attention. Usman Khan, the terrorist, was jailed in 2012 for plotting to bomb the London Stock Exchange and the US Embassy but still emerged as the deadly killer after eight years in prison. The revelation that Khan was automatically released has further fueled public anger.

How could a convicted terrorist still emerge as a radical jihadist, and how could such an extremist be automatically let out are questions facing the UK prison system. The failure of the prison's deradicalization program is to blame, The Guardian concluded in its recent op-ed article. The two main intervention projects that the UK prison system introduced to tackle terrorist prisoners, as reported by The Guardian, are Healthy Identity Intervention and al Furqan. While the former delivers tailored sessions, the latter is to correct the extremist interpretations of Islam.

However, both projects were seen by the peer-reviewed Prison Service Journal as in their "relative infancy." Worse still, despite the country's efforts to set up separation centers, or in other words, jihadi jails, to tackle radicalization, "as many as three-quarters of convicted terrorist prisoners reject engagement with the deradicalization program," The Guardian reported.

This, to some extent, explains why radicals still resort to deadly violence after spending years in prison. Apparently, the UK authorities have realized the severity of the issue. Immediately after the London Bridge attack, UK Prime Minister Boris Johnson pledged that terrorists would be locked up for at least 14 years and would be no longer eligible for early release.

However, this is seen by many as Johnson's political attempt to woo voters for the general election. Without effective deradicalization program, no matter how long a terrorist would spend in prison, he, driven by radical jihadist sentiments, would still commit violent attacks after being released. This would also mean that even if terrorists were temporarily put behind the bar, the UK would be exposed to daunting terrorism threats sooner or later.

The UK has been known for its world-class security services and seen as a dreamland for migrants from developing countries, but such a developed state seems to be more vulnerable to terror attacks than its less-developed counterparts. From the explosion at a London underground station in 2017 to the stabbing in Manchester this October to the horrible knife attack near the London Bridge last week, the United Kingdom has been an easy target of terrorism in recent years.

On the contrary, anti-terror endeavors in China's Xinjiang Uygur Autonomous Region deserve the world's applause. While the region was a hotbed for terrorism, it has seen no single terror incident in the past consecutive years, which, to a large degree, is a result of the establishment of the vocational education and training centers. From this perspective, the UK, perplexed by a slew of terror attacks in recent years, should learn from China, especially at the time when its jihadi jails failed, and the Boris Johnson administration cannot provide a feasible alternative.

But regrettably, the UK and other Western countries are straining every nerve to pour dirty water at Xinjiang's vocational education and training center, depicting it as a "concentration camp" on minority Uygur people. This is the pure ideology-driven demonization of China. To counter-terrorism, the international community must get united, which requires Western countries to view China with objectivity, cooperate with, and sometimes learn from this rising power. But apparently, the UK failed in this regard.

If the UK prison system and probation service, as well as other educational institutes in the country, could draw lessons from Xinjiang's deradicalization efforts, Khan may have not emerged as a radical jihadist after eight years in prison, and London Bridge attack victims would never have lost their innocent lives.