Yungang Grottoes and other relics set for a digital rebirth
China Daily
07:24, November 06, 2020 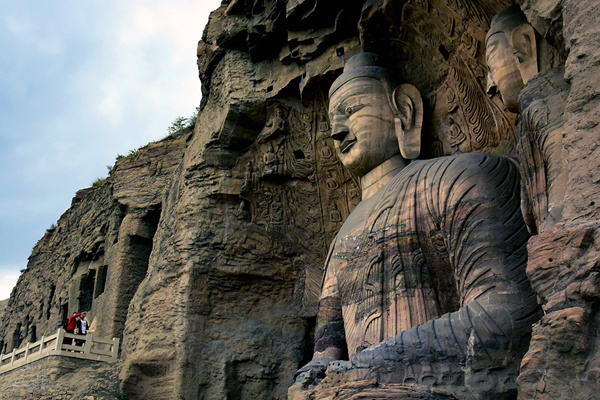 Located to the south of Wuzhou Mountain in Shanxi, the Yungang Grottoes was listed as a UNESCO World Cultural Heritage site in 2001. (Photo: Xinhua)

Thanks to advanced digital technology, including digital image acquisition and 3D printing, researchers are busy "duplicating" the Yungang Grottoes in an attempt to preserve the precious cultural relics and allow more people to access them.

Yungang Grottoes in Datong, Shanxi province, are a world cultural heritage site with a history that goes back more than 1,500 years. In Yungang's 45 big grottoes and more than 200 small grottoes, there are about 59,000 figures of the Buddha, which are a priceless treasure of human culture.

But because of the effects of climate change, the grottoes face irreversible damage year after year. Sometimes, calamities such as fire or earthquake may also harm them. Preserving the grottoes for posterity is the cultural relic experts' priority.

Employing advanced digital technologies in recent years, researchers have been trying to establish digital archives to preserve the cultural relics.

A sudden fire caused serious damage to the Notre-Dame de Paris in April 2019. Fortunately, the structure's interiors and exteriors had been digitally mapped before the fire. That could effectively help in efforts to restore the iconic monument to its former glory.

The new technology could enable more people to have access to the cultural relics despite the distance. This June, the Zhejiang University Cultural Relics Research Institute and Yungang Grottoes Research Institute together "copied and pasted" cave No 12 of the Yungang Grottoes for exhibition in Hangzhou, in what is the world's first mobile 3D-printed 1:1 replica of a grotto.

The Yungang researchers' attempt is a good example of technology helping to preserve cultural relics. It is hoped the new digitalized technologies will facilitate the "rebirth" of the cultural legacy, and bring them to more places worldwide.