BEIJING, April 15 (Xinhua) -- It is helpful to begin a discussion of whether China makes good on its promise of ivory trade ban with a brief look at a stunning case.

The General Administration of Customs announced on Monday that on March 30, China cracked a cross-border smuggling ring with a seizure of 2,748 elephant tusks, or 7.48 tonnes, the biggest volume busted by Chinese authorities in recent years. 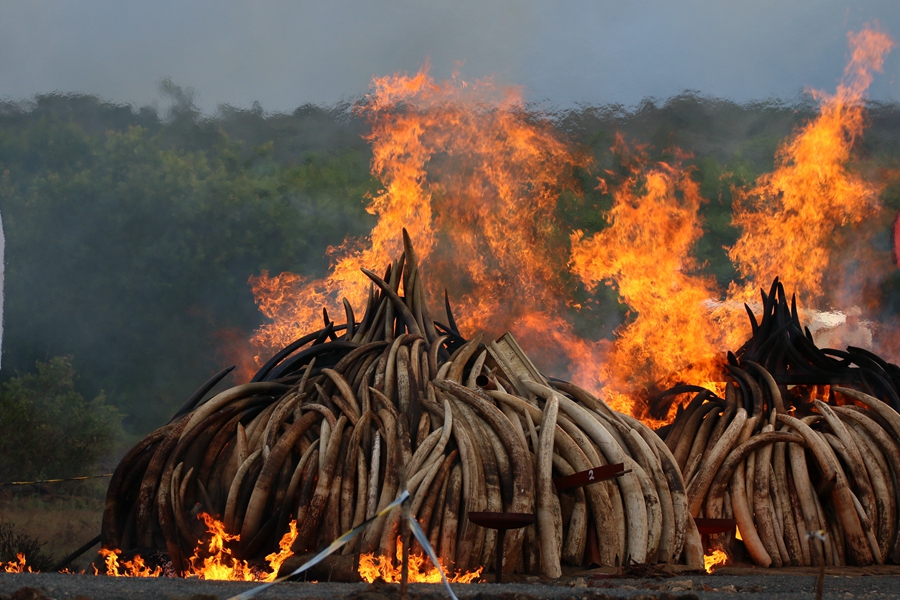 Those ivory were hidden inside the dilapidated factory mill before they were falsely reported as lumbers when entering into China, according to the customs.

In 2018, Chinese customs seized 25,671 items of endangered species and their products, including ivory items weighing 800 kg in total.

This all provides compelling evidence that China is serious about making the country ivory trade-free. And the commercial processing and trade of ivory is losing appeal in China, once the world's largest ivory market.

As ivory is often used a decoration for the wealthy Chinese in pursuit of high living standards, the appreciation and consumption of ivory by a handful of people should give way to the conservation of wildlife, such as elephants, as it is important to recognize that trade in wildlife affects the Earth's biodiversity and has done so for centuries.

The protection of wildlife is on the global agenda and no country should escape its obligations as international collaboration is essential in fulfilling this task.

China has always been a responsible stakeholder in global affairs, and preserving African elephants is no exeception.

China is currently embarking on a long journey of creating an "ecological civilization," a strategic undertaking adopted by the Chinese leadership.

The crackdown on smuggling of endangered species and their products including ivory is seen as a mission of major political significance that must be completed with all-out efforts and zero-tolerance.

While critics are skeptical whether China will keep its promise on the ban, China has been resolute. In February 2019, China expressed support for the fair trial of Yang Fenglan, a Chinese businesswoman by the Tanzanian court for alleged ivory smuggling. She was sentenced to 15 years behind bars.

As Chinese Foreign Affairs spokesperson Geng Shuang has commented, China will continue working with the international community and contribute to the protection of endangered wildlife and the suppression of illegal trade.

If China does not seek to protect endangered wildlife, the global mission will be less meaningful. China will continue to honor its commitment, while joint efforts with other countries also makes sense.