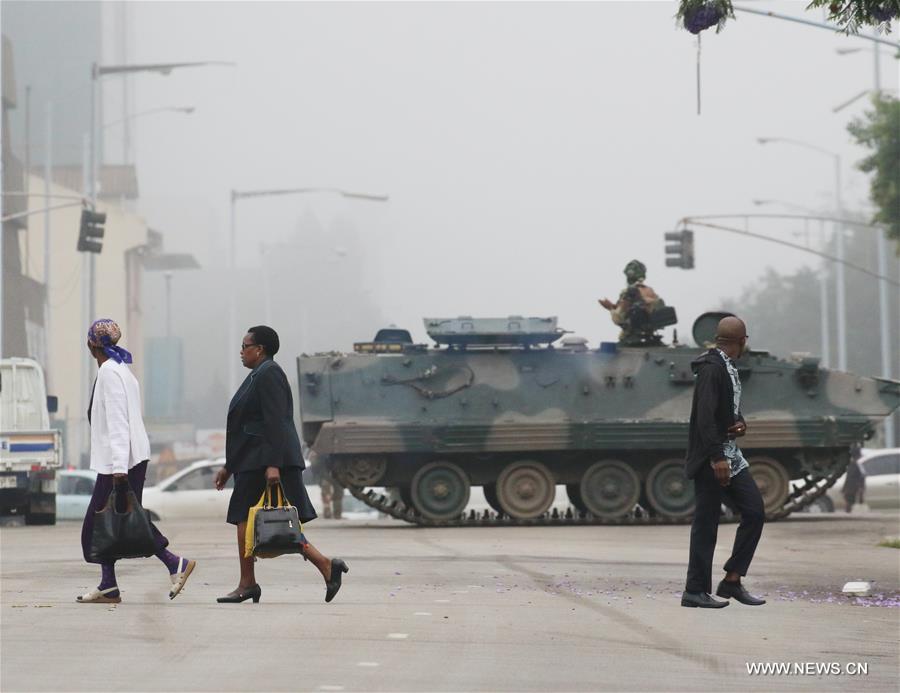 People walk past an armored vehicle on a street in Harare, capital of Zimbabwe, Nov. 15, 2017. Armored carriers cordoned off Zimbabwe's Presidential seat of power and Parliament Building in the capital while helicopters circled the city center on a drizzly morning, after the military announced it had taken over control of all government institutions. (Xinhua/Philimon Bulawayo)

A political crisis began to unfold in Zimbabwe on Wednesday. The military took control of the country and detained President Robert Mugabe. It insisted that it was "not a military takeover" and that Mugabe and his family were safe. According to BBC, the ruling Zimbabwe African National Union - Patriotic Front (Zanu-PF) Party announced on its Twitter account that the country had just experienced "a bloodless peaceful transition" and former vice president Emmerson Mnangagwa will take control of the party, with Mugabe being removed as president. But a few hours later, it was pointed out that the account was not an official one. The BBC apologized for describing it as "official."

93-year-old Mugabe has been Zimbabwe's president since 1987. He is viewed as a national hero who fought against white-minority rule. Later he became an adversary of the Western world after he launched land reforms by taking over white-owned farms in order to resettle landless blacks.

Although isolated by the West, Zimbabwe has played an active role in African integration. After a short period of rapid economic development, the country has been in an economic slump. Yet Mugabe has retained power and is considered a classic "strong man."

Due to his age, a post-Mugabe power struggle has been going on in Zimbabwe. On November 6, Mugabe dismissed 75-year-old Mnangagwa, paving the way for his 52-year-old wife Grace Mugabe to take over. The military opposed these changes.

The African Union clearly opposes military coups and does not admit any regime that takes power through a coup. That is perhaps why the military denied immediately that Wednesday's move was a military coup.

The following factors will affect how the situation evolves in the future. First, does the whole of the military oppose Mugabe? Will the majority of the Zanu-PF reach a consensus about solving the crisis? If the military and the ruling party can reach a consensus, the situation will become clear. But if they split, Zimbabwe may run into chaos. Second, the attitude of the African Union and the West also matters. Both object to military takeovers, but Mugabe is one of the African leaders the West dislikes most. It seems the West is likely to turn a blind eye to this crisis. Third, Mugabe enjoys a good reputation among his grass-roots supporters, but there are others who want reform. It is time to test the public's real attitude toward Mugabe. Public opinion will affect the situation. Last, one of the main reasons for the crisis is the declining loyalty toward Mugabe who is in his 90s. The factor is likely to generate an impact at critical junctures.

The relationship between China and Zimbabwe has been steady and Wednesday's incident will not affect the general trend of bilateral ties. Since Zimbabwe's independence, there has been no anti-China faction in the country, and it is unlikely to appear in the future.

Generally, African countries are expecting to enhance cooperation with China and China has played a positive and constructive role in Africa. The long-term friendship between China and Zimbabwe will transcend the internal disturbances in Zimbabwe. If Zimbabwe can handle the crisis well and maintain national stability, it will fit the interests of the nation and Africa. The Chinese public would like to see peace in that distant but friendly country.