PHOTOS Life of the elderly across China

Life of the elderly across China Bai Jinqin, a 74-year-old bodybuilding adept, exercises at a gym in north China's Tianjin, March 13, 2019. Bai has kept exercising for 14 years. After finishing her housework, Bai likes to spend one hour every day at the gym building her body. The hobby has rewarded her with good physique and energy. (Xinhua/Yue Yuewei) 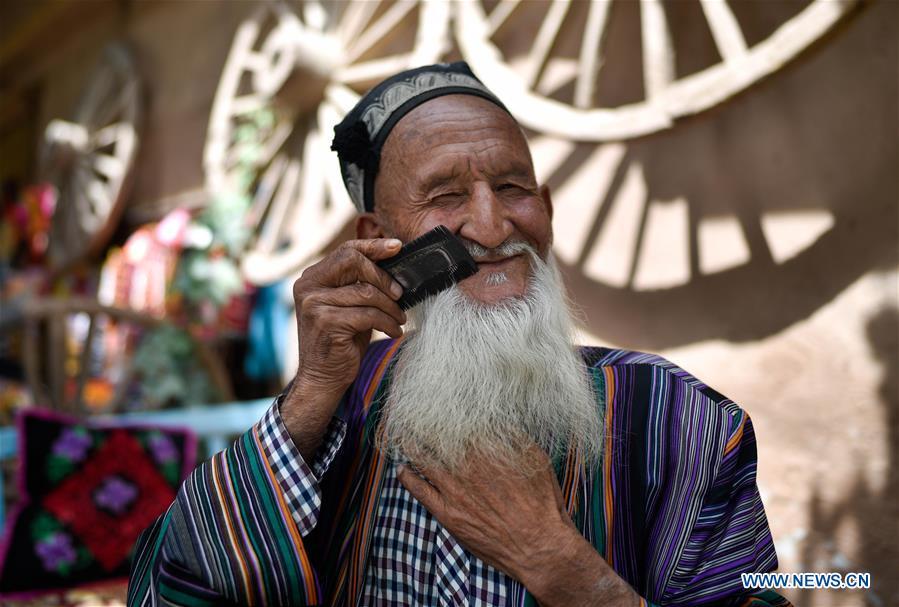 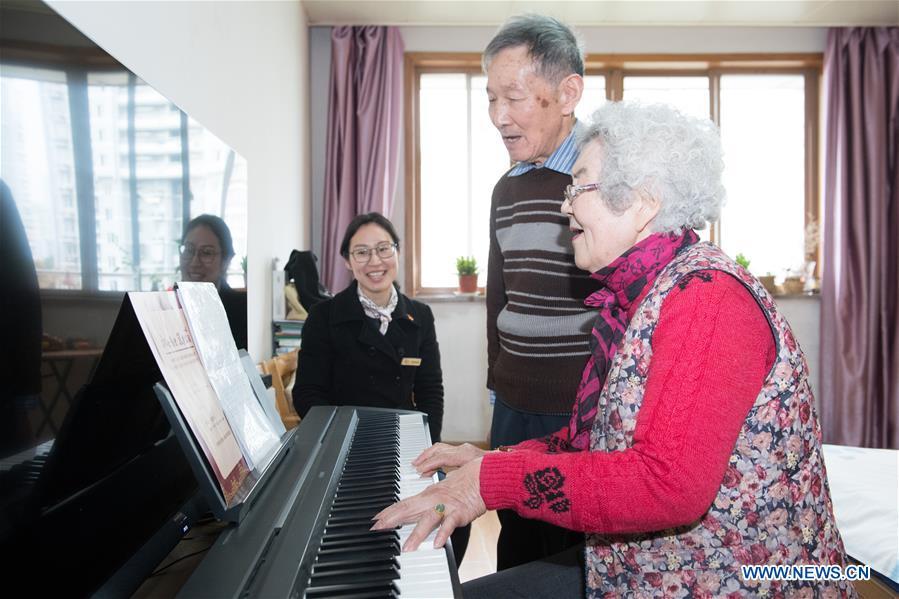 An elderly villager sings with her fellows via WeChat on a smartphone in Palian Village of Tengchong, southwest China's Yunnan Province, Aug. 17, 2020. (Xinhua/Hu Chao) 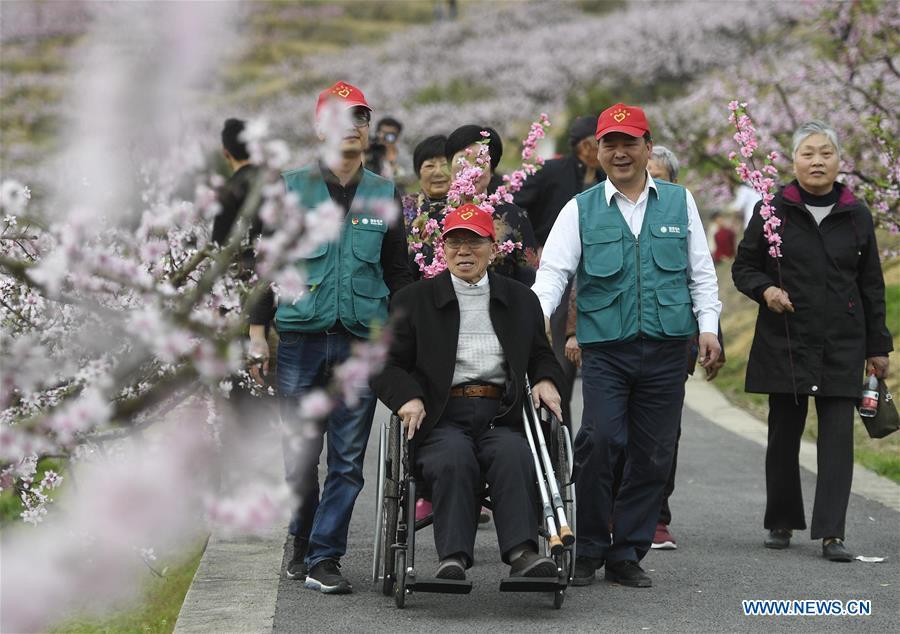 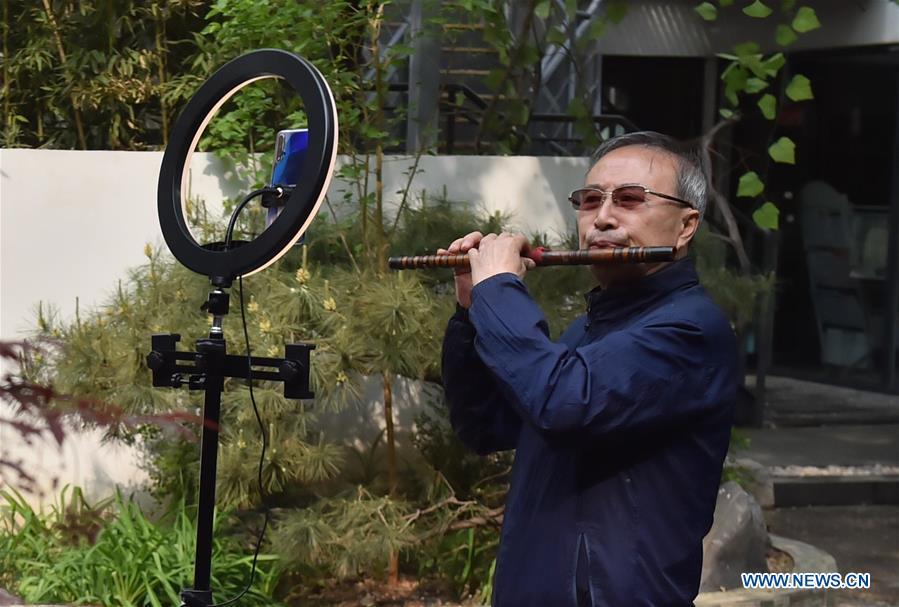 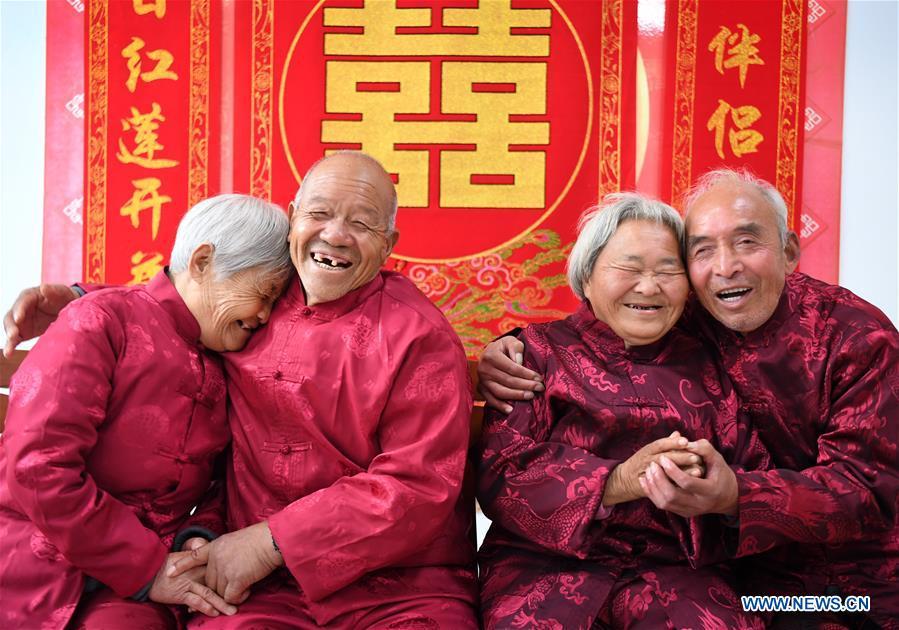 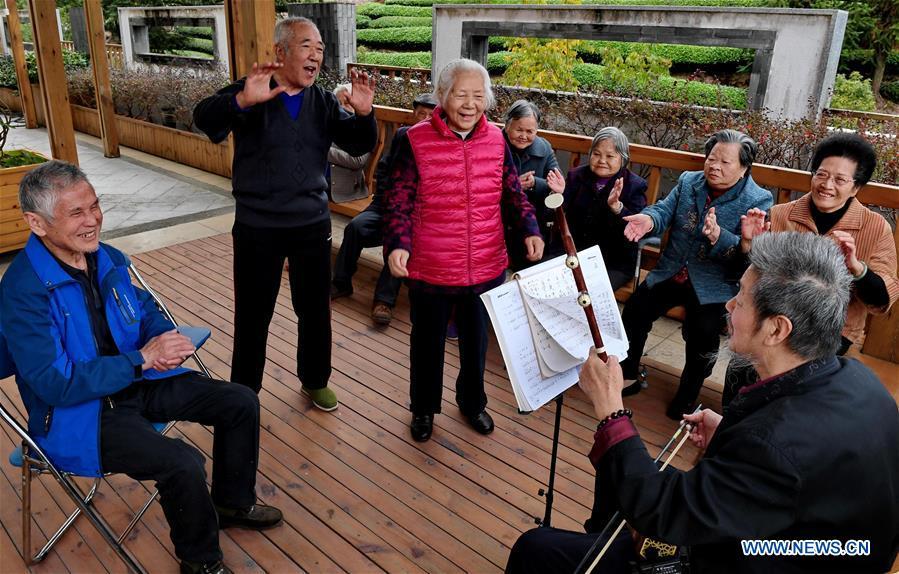 The elderly sing at the social welfare center in Wuyishan City, southeast China's Fujian Province, on Nov. 1, 2018. In recent years, Wuyishan has explored the supporting mode for the aged in mountainous areas. Apart from perfecting facilities, considerate services were also provided to ensure a sound environment for their happy life. (Xinhua/Zhang Guojun) 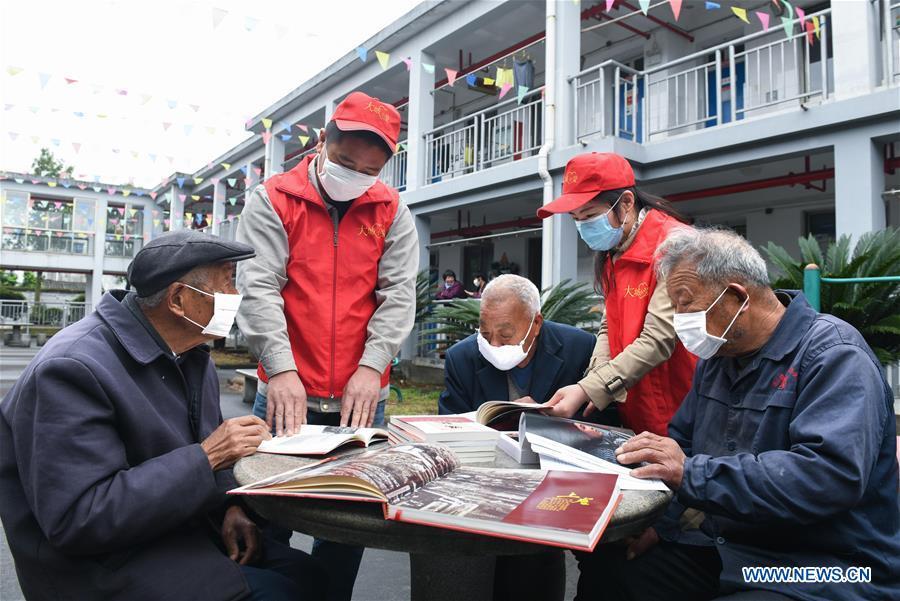 Senior residents are accompanied on reading by volunteers at a nursing home in Yuyao, east China's Zhejiang Province, April 21, 2020. Volunteers brought more than donated 100 books to the elderly living in the nursing home as the World Book Day approaches. (Xinhua/Xu Yu) 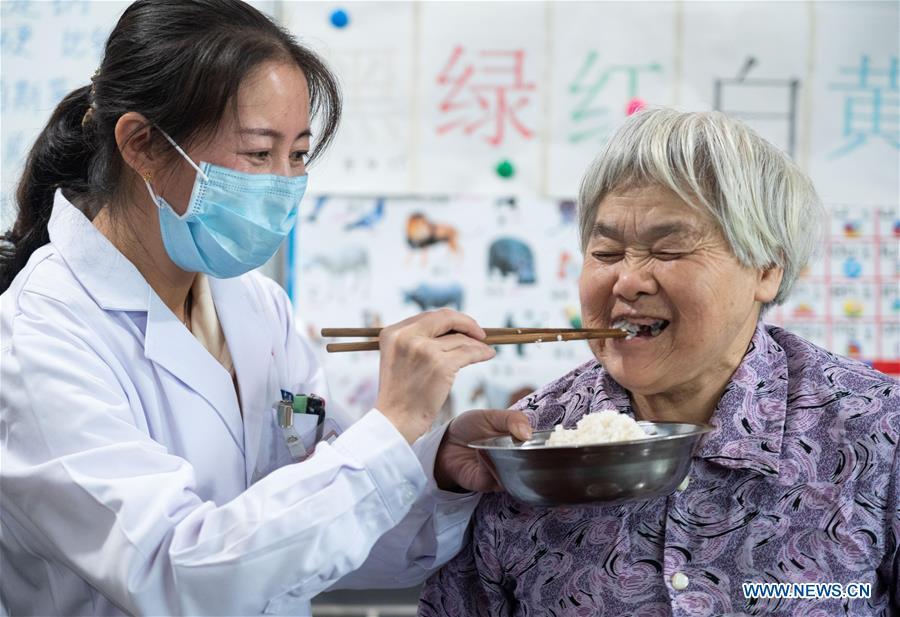 Photo taken on July 28, 2020 shows Gu Dawo, an endurance sports enthusiast running in a forest park in Yinchuan, northwest China's Ningxia Hui Autonomous Region. Gu Dawo, a 75-year-old Chinese grandpa, finished this year's Xiamen International Marathon with a remarkable time of 4 hours, 23 minutes and 45 seconds, which astonished many younger runners. Having embarked on training for marathon at the age of 69, Gu finished his first half marathon in 2013. Since then, Gu has begun running numberous marathon events across China.In 2017, Gu showed up as the oldest-ever offical pacer in Yinchuan Internaional Marathon. After swimming and cycling became parts of his daily fitness, Gu made attempts to train for triathlon, a multisport with three continuous and sequential endurance races. In 2017, he went to Chattanooga of Tennessee of the United States to compete in the Ironman 70.3. As the oldest one to complete the triathlon in the event, Gu was introduced to be from China in the award ceremo Zhang Liangui, 68, practices Taiji sword at the Temple of Heaven park in Beijing, capital of China, Aug. 19, 2020. For more than six consecutive years, Zhang has followed master Yang Shuqin to work out on traditional Chinese aerobics like Taijiquan, Taiji fan and Baduanjin. Benefiting from constant practice of the sports, Zhang's hypertension and hyperlipidaemia have been cured, and even his bad temper has changed. Like Zhang, among the exercise group led by coach Yang Shuqin, most of the senior members have the similar experiences. Practicing traditional aerobics together not only has improved their physical condition significantly, but also enable them to make friends with others who have the same hobbies. (Xinhua/Meng Tao) 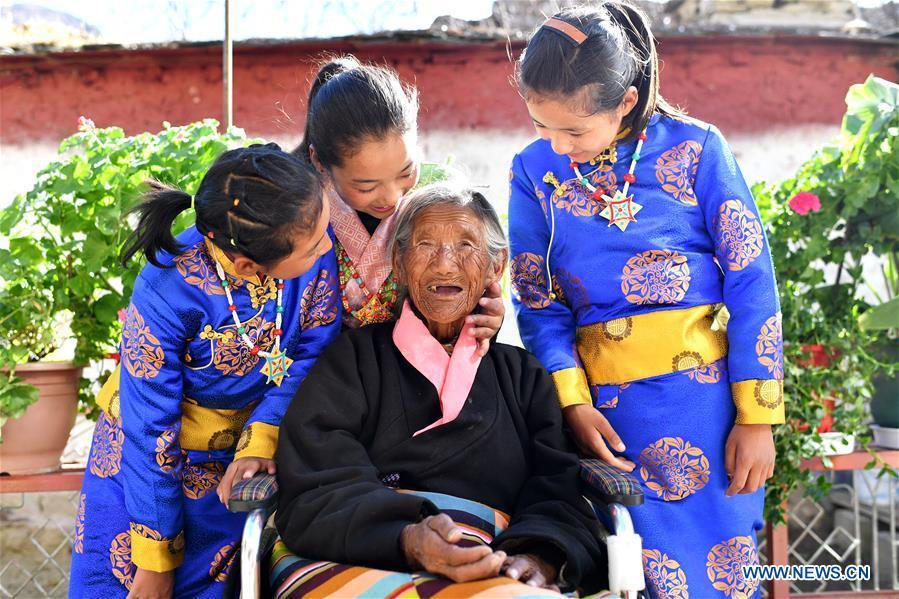 Sonam Drolma talks with her great granddaughters in the courtyard at home in Reguo Village of Gyaca County in Shannan, southwest China's Tibet Autonomous Region, March 24, 2020. Sonam Drolma is a 109-year-old villager in Reguo Village of Shannan. Since she was born, she has gone through half a century of twists and turns and sufferings as a serf. As a descendant of serfs, Sonam Drolma began to work for serf owners at the age of 15. Sonam served as a serf for 47 years, witnessing her parents and brother die at an early age because of the overwork and poor living conditions. After the democratic reform, she owned the land, houses, cattle and sheep that she had never dreamed of. Since then, she never had to live the life being exploited and oppressed. Then Sonam Drolma gave birth to her daughter. After China's reform and opening up in early 1980s, Sonam Drolma's daughter Tsering Dzongpa picked up the baton of the family, going all out to make the family shake off poverty and have a well-o 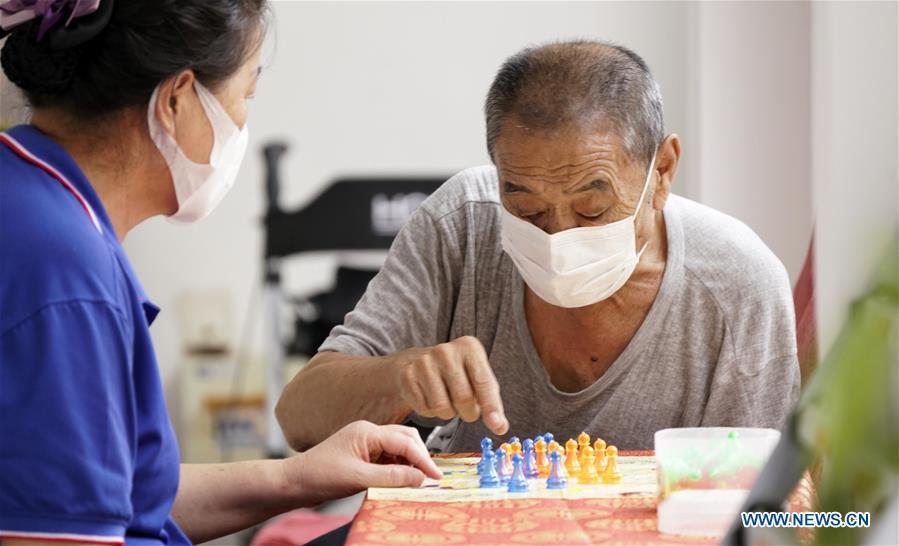 A senior resident(R) plays chess with a staff member at a nursing home in Beijing, capital of China, Aug. 6, 2020. (Xinhua/Li Xin) 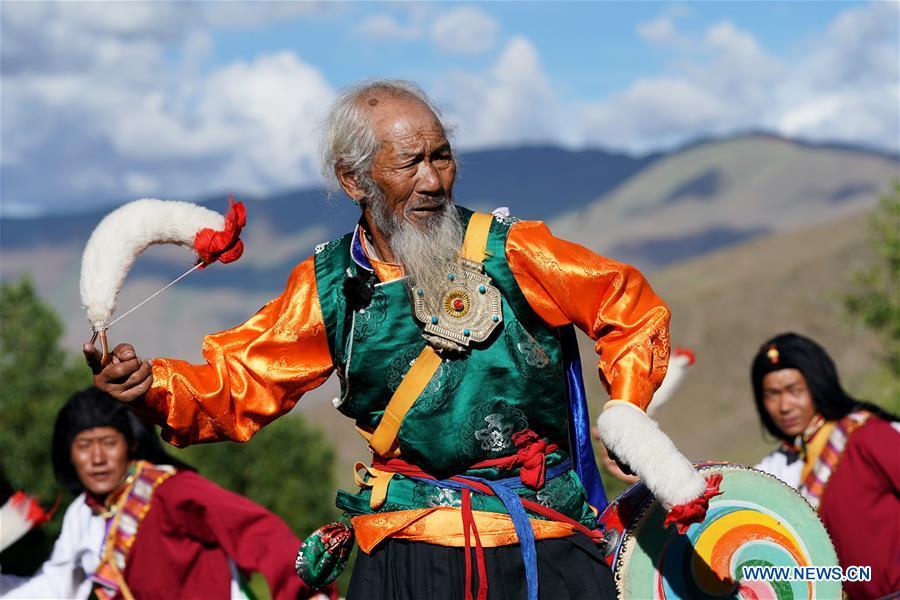 Nyima, an inheritor of Jiuhe Zhuo dance, performs Jiuhe Zhuo dance in Jiuhe Village of Qonggyai County in Shannan, southwest China's Tibet Autonomous Region, July 1, 2020. Nyima, an inheritor of Jiuhe Zhuo dance, which is a national intangible cultural heritage, began to learn the dance from his father at the age of nine and has been dedicated to Zhuo dance performance for over 60 years. His performance once won a national award for folk arts. After decades of study of the dance, Nyima has formed his unique style. Nyima has trained dozens of apprentices and formed a Zhuo dance performing team in Jiuhe Village. Now, young dancers of the team often perform in different places. The Zhuo dance has become an important approach to reducing poverty for local villagers. (Xinhua/Zhan Yan) 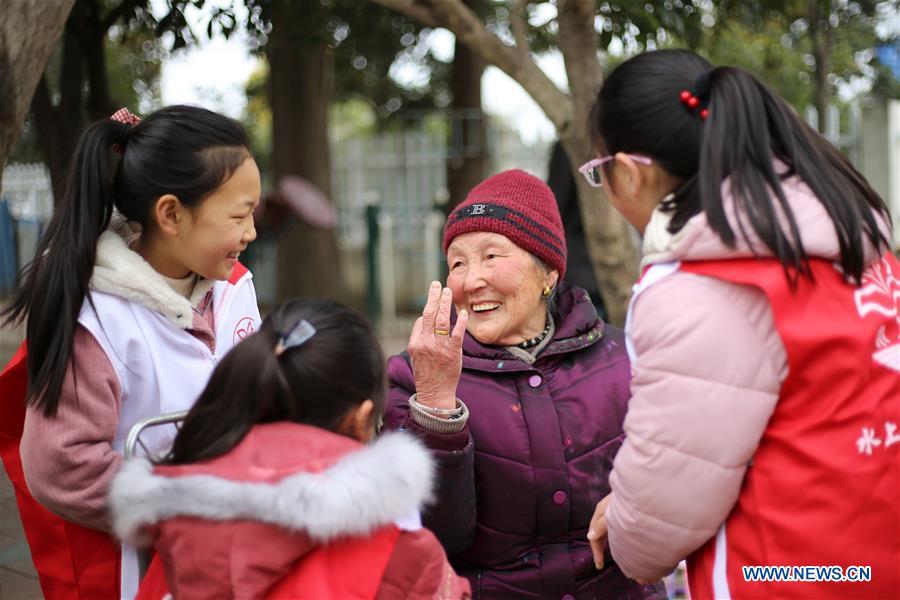 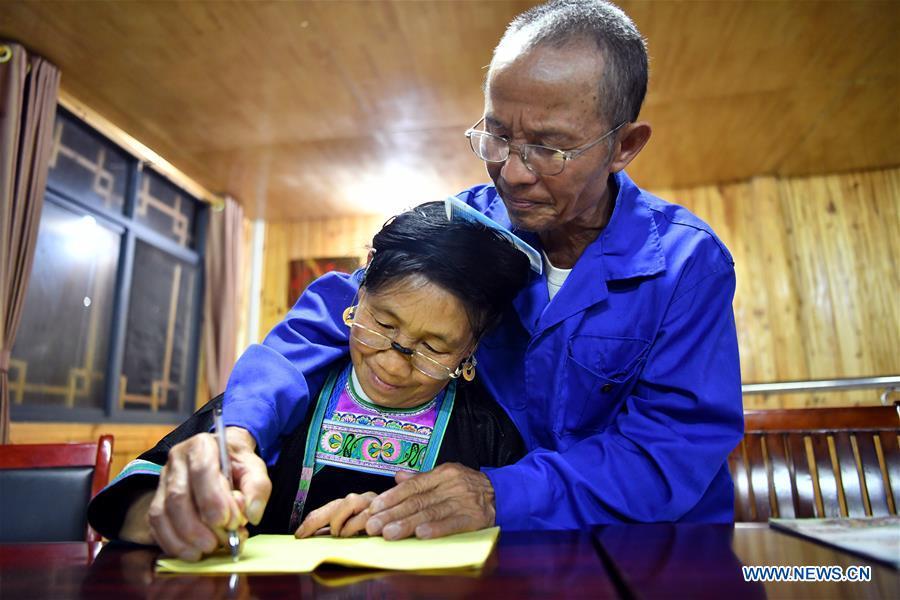 Villager Liang Anhe(R), 70, teaches his wife Liang Yingmi, 67, to write Chinese characters during a Mandarin training program in Wuying Village, a remote village inhabited by the Miao ethnic group where women over 40 have hardly ever attended any school, on the border between south China's Guangxi Zhuang Autonomous Region and southwest China's Guizhou Province, on Sept. 14, 2020. Since March 2020, local authorities have piloted a Mandarin training program at Wuying Village as part of the local poverty alleviation efforts, employing college students to teach stay-at-home women Mandarin, music, dance and other skills. So far, over 70 Mandarin training courses have taken place in Wuying. The number of students in the training courses has grown from 6 in the first class to nearly 30 now. To balance work and study, poverty-alleviation officials in the village have also set up after-school training centers, planting sorghum and raising fish along with local women. (Xinhua/Li Xin) 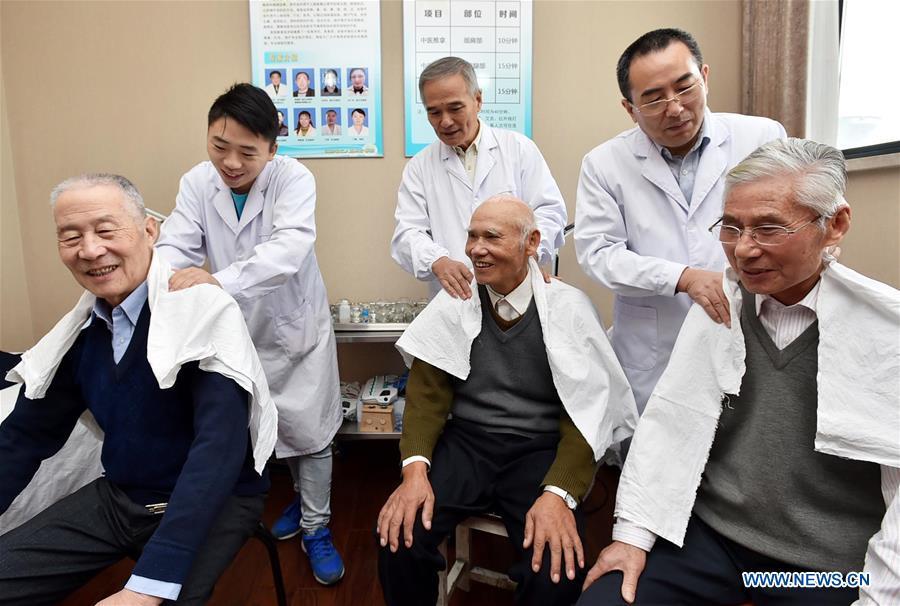 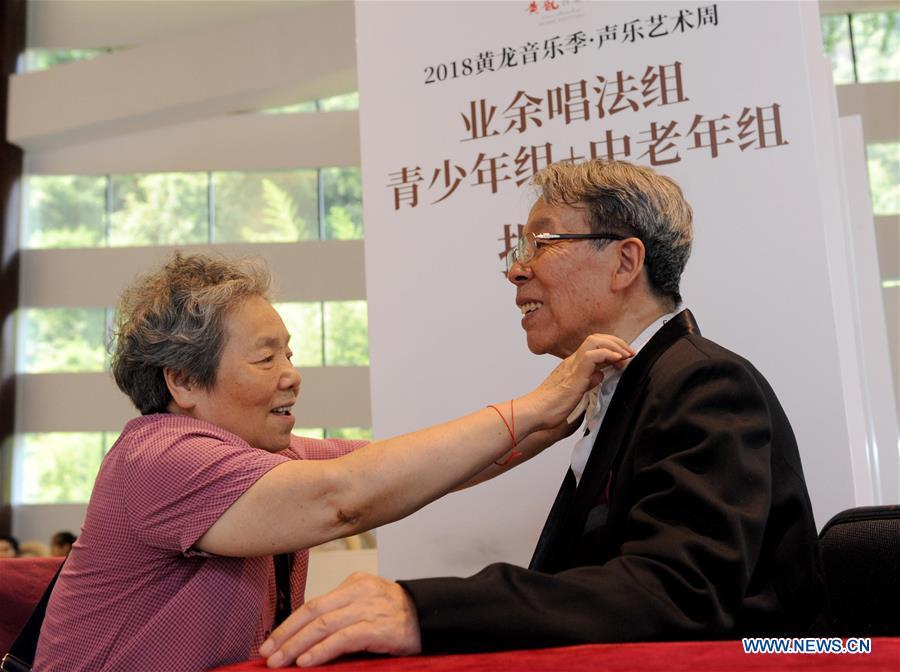 Sun Yiqing arranges costume for Liu Xingren during a contest of Huanglong music festival in Zhangjiajie, central China's Hunan Province, Aug. 14, 2018. 82-year-old Liu is a retired lawyer. He once organized an amateur chorus and orchestra. As a music enthusiast, Liu practices singing in his spare time. His wife Sun Yiqing, 76, is a retired teacher. Liu Xingren was accompanied on several singing contests in Beijing and Tianjin by his wife. The aged couple has a wish to continue to pursue their singing dream in the future. (Xinhua/Wei Hai) 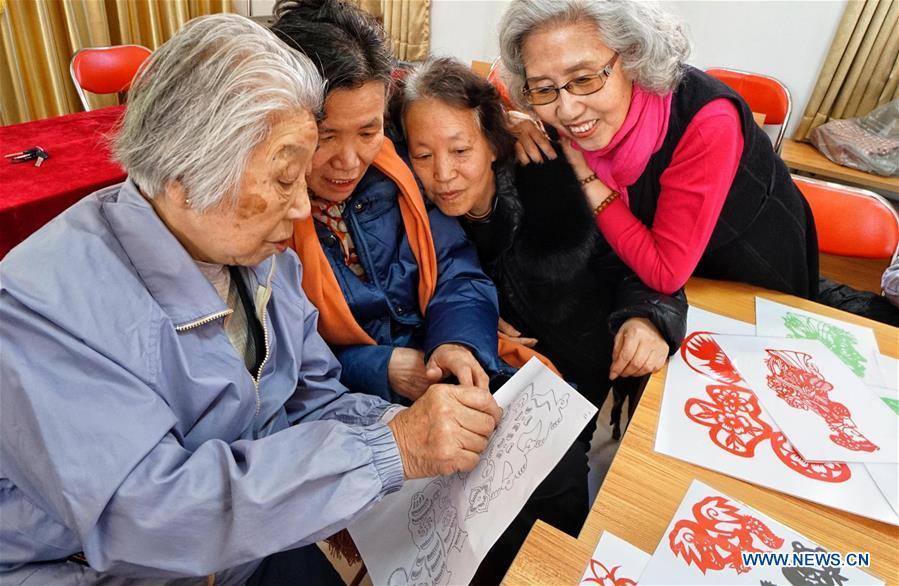