HONG KONG, Nov. 23 (Xinhua) - After more than 10 days in coma, the 57-year-old man set on fire by a rioter in Hong Kong has waken up at a hospital. But he, still extremely weak, could not even recognize her daughter, and is facing a painful and arduous process of treatment and recovery. 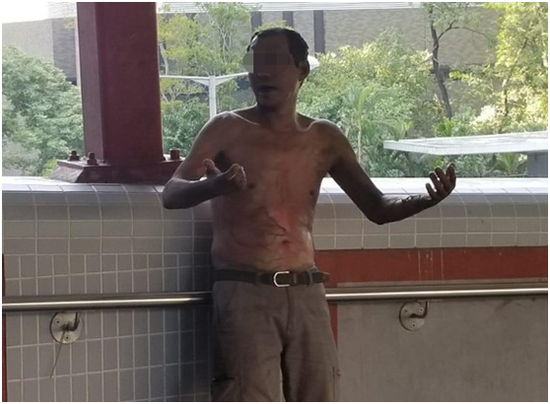 "The first thing he told me (after he woke up) was that they (rioters) have no humanity and that I should be careful on the street," his wife told Xinhua on Saturday.

Wearing a pair of sunglasses and a medical mask, she asked reporters to alter her voice because she was afraid of being identified and revenged.

The man surnamed Lee was poured with flammable liquid and set ablaze on a footbridge in Ma On Shan on Nov. 11, following an argument with rioters who were trashing facilities in a metro station.

He suffered from burns on almost half of his body.

"I was heartbroken and I just couldn't accept the fact," his wife said. "He is such a good person."

Tears rolled down her face when she saw her husband at hospital on Nov. 11. She could not even talk. Before Lee woke up, she kept talking to him and told him to hold on although she knew that he might not hear her.

Although awaking, Lee is not in good condition and could not even recognize his daughter. "He just knows me. When one or two more people came in the ward, he appeared to be very scared, like somebody may attack him," his wife said.

After two skin grafting operations, Lee was transferred from the intensive care unit to the burn center. Most of his body was still bandaged, and his eyes, nose and lips exposed outside were still covered with black scars from burns.

It remains to be seen if there will be rejection and Lee will have to receive multiple surgeries, according to the doctor. There will be a long and painful road of recovery for him.

"He had never argued with people on the street, and I think he just could not stand those people destroying the metro station," his wife said. "I think he was brave."

Lee, a construction worker, was the only breadwinner of the family. After the incident, his wife and daughter have been in great pain and under enormous pressure.

Many Hong Kong residents have shown support for them, sending cheer cards and donating money. One said in a letter that Lee is a real hero and wished him speedy recovery.

Lawmaker Elizabeth Quat, who has been closely following Lee's condition, transferred donations to Lee's wife on Saturday. "My office phone kept ringing as people wanted to know Lee's condition. They wanted to express their support and some asked for the address to send a cheque."

"Many innocent people fell victim to violence in recent days and an old man even died after being hit by a brick hurled by a rioter. It is absolutely unacceptable," Quat said, adding more Hong Kong residents should stand out and say no to violence.