Proposed by Chinese Premier Li Keqiang during his visit to Pakistan in May 2013, the China-Pakistan Economic Corridor (CPEC) acts as a bridge for the new Maritime Silk Route that envisages linking 3 billion people in Asia, Africa and Europe.

A flagship project of the Belt and Road initiative as well, the CPEC intends to revive the ancient Silk Road with a focus on infrastructure, and constitutes the strategic framework of bilateral cooperation.

During Pakistani President Mamnoon Hussain's visit to China in February 2014, the construction of CPEC was an important issue. The second meeting of the China-Pakistan Economic Corridor Joint Commission was held in Beijing, and the two sides signed documents on the establishment of the China-Pakistan Joint National Research Center for Small Hydropower Technology, the establishment of the Confucius Institute, the second phase of the upgrading of the Karakoram Highway and other cooperative documents. 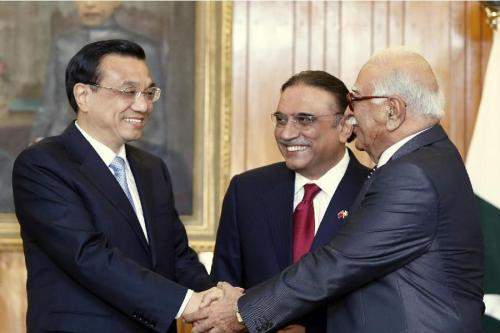 Premier Li Keqiang with Pakistan's Prime Minister Nawaz Sharif and Punjab Chief Minister Shahbaz Sharif (left) ahead of a signing ceremony at the Great Hall of the People in Beijing on Friday. (Photo: China Daily/Wu Zhiyi)

With a total length of 3,000 kilometers, the CPEC starts from Kashgar and ends at Gwadar Port, connecting with the Silk Road Economic Belt in the north and the 21st Century Maritime Silk Road in the south, so it is a key hub of the Silk Road linking north and south, a trade corridor including highways, railways, oil and gas and fiber optic cable channels, and an important part of the Belt and Road. The transport link is described as a “long-term plan” to connect Kashgar in the Xinjiang Uygur autonomous region to the southwestern Pakistani port of Gwadar, more than 2,000 km away across a mountainous area. 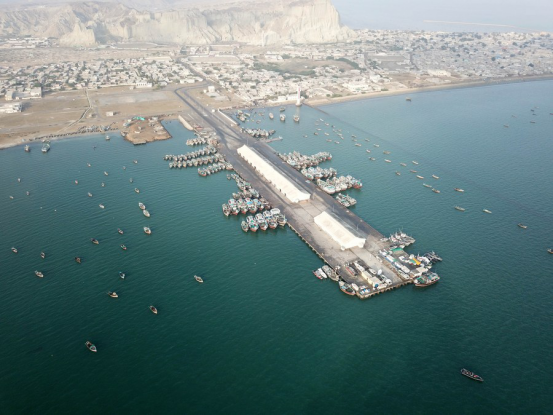 The China-Pakistan Economic Corridor Joint Committee focuses on infrastructure construction, investment, energy, and other issues, both sides are actively promoting the Karakoram Highway, Gadani, and Tal energy projects, Gwadar Port operations, Karachi-Lahore highway, and other projects. Chinese Foreign Ministry spokesperson Hua Chunying said at a regular press conference that China and Pakistan have established a good communication and coordination mechanism on the construction of the corridor, and the relevant projects are advancing smoothly and the corridor has entered the full implementation stage.

Pakistan is currently facing a severe energy shortage, with the country facing a shortfall of up to 5,000 megawatts of electricity at times during the summer months, electricity is one of the biggest challenges. Pakistan hopes to improve its energy mix with its abundant solar, wind, and large coal and fossil fuel resources.

According to the contract, the DFEG will provide two 660 MW emergency coal-fired power generation equipment, including two supercritical 660 MW coal-fired steam turbines from Dongfang Turbine Co. The project will continue to generate about 9.5 billion kilowatt-hours of electricity per year after completion, which is expected to greatly alleviate Pakistan's power shortage. 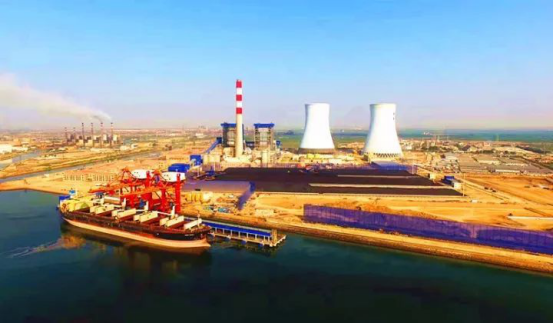 At 9:16 am on November 10, 2017, the first unit of the Port Qasim Media Power Project in Pakistan was successfully connected to the grid. (Photo: POWERCHINA)

At present, the on-duty rate of the power plant is up to 100 percent, and the power is running at full capacity to ensure the stable operation of the unit. As the first big energy project of CPEC in Pakistan and the biggest overseas investment of POWERCHINA, the Port Qasim Coal-fired Power Plant, following the requirements for deployment of POWERCHINA and POWERCHINA Resources Limited, switched to a two-way "battle mode", described as "epidemic prevention and control plus safe production", immediately after the outbreak of the novel coronavirus.

The power plant has generated a total of 1.34 billion kWh of electricity in 2020, providing a continuous source of energy to more than four million users in Pakistan.

In 2020, several energy projects will be put into operation, which will bring more fierce market competition for electricity production in Pakistan.

An official of Port Qasim Electric Power Company said that facing the new situation, new tasks, and new demands, the company plans, adheres to customer-centric and win-win principles, strives to promote its overseas business, and consolidates the friendship between China and Pakistan. 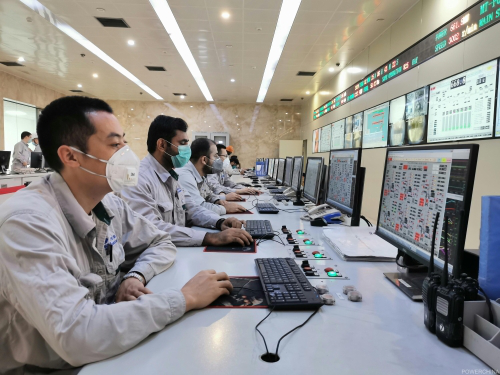 In Multan, a city in Punjab Province, the Peshawar-Karachi Motorway project, built by China State Construction Engineering Corp, is the largest transportation infrastructure project under the CPEC. Since its opening on November 5 last year, it became the country's most advanced motorway. On May 9, 2016, construction of the Sukkur-Multan section of the Pakistan Peshawar-Karachi Expressway Project of CPEC began. With a length of 392 kilometers, the entire route is designed according to the standard of six lanes in both directions and 120 kilometers per hour, and the contract value of this section of the project is about $2.89 billion (￥18.46 billion).

China and Pakistan also signed an agreement on the rehabilitation and up-gradation of Karachi-Lahore Peshawar (ML-1) Railway Track (1,872 km). Aiming at doubling of entire track from Karachi to Peshawar, raising the speed of passenger trains from 65/110km/h to 160 km/h, and upgrading freight trains to operate at 120 km/h. The Railway trunk line connects the north and south of Pakistan and effectively enhance the transportation capacity and boosts the economic development along the railway line upon completion. 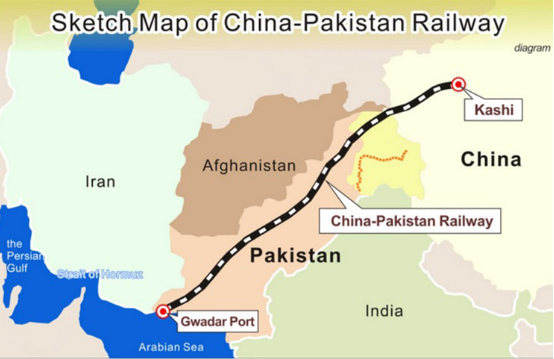 Under the plan, new railway tracks will be laid from Gwadar to Quetta and Jacobabad via Besima. (Photo: Radio Pakistan.)

China and Pakistan are all-weather strategic partners who stand together through thick and thin and share weal and woe. Pakistan's Minister for Planning and Development Asad Umer set the record straight on Pakistan’s ties with China and CPEC by stating that relations between two brotherly nations will never fray. The minister made it clear that CPEC brought only a $4.9 billion loan to Pakistan at the average interest rate of 2.34 percent, which is comparatively very low, while the rest is an investment.

He clarified that the total public debt of Pakistan is around $74 billion while the debt to CPEC is only $4.9 billion, or 10 percent of the total debt, while the rest 90 percent was to Western countries and international financial institutions.

In the past six years, the launch of CPEC has not put a burden on the Pakistani economy but helped it come out of crises.

CPEC is a framework of regional connectivity, it not only benefits China and Pakistan but also has a positive impact on Iran, Afghanistan, India, the Central Asian Republic and the region. The enhancement of geographical linkages having improved road, rail and air transportation system with frequent and free exchanges of growth, enhancing understanding through academic, cultural, and regional knowledge and culture, the activity of higher volume of flow of trade and businesses, producing and moving energy to have more optimal businesses and enhancement of co-operation by the win-win model will result in well connected, an integrated region of shared destiny, harmony and development. CPEC is a journey towards economic regionalization in the globalized world. It founded peace, development, and the win-win model for all of them.