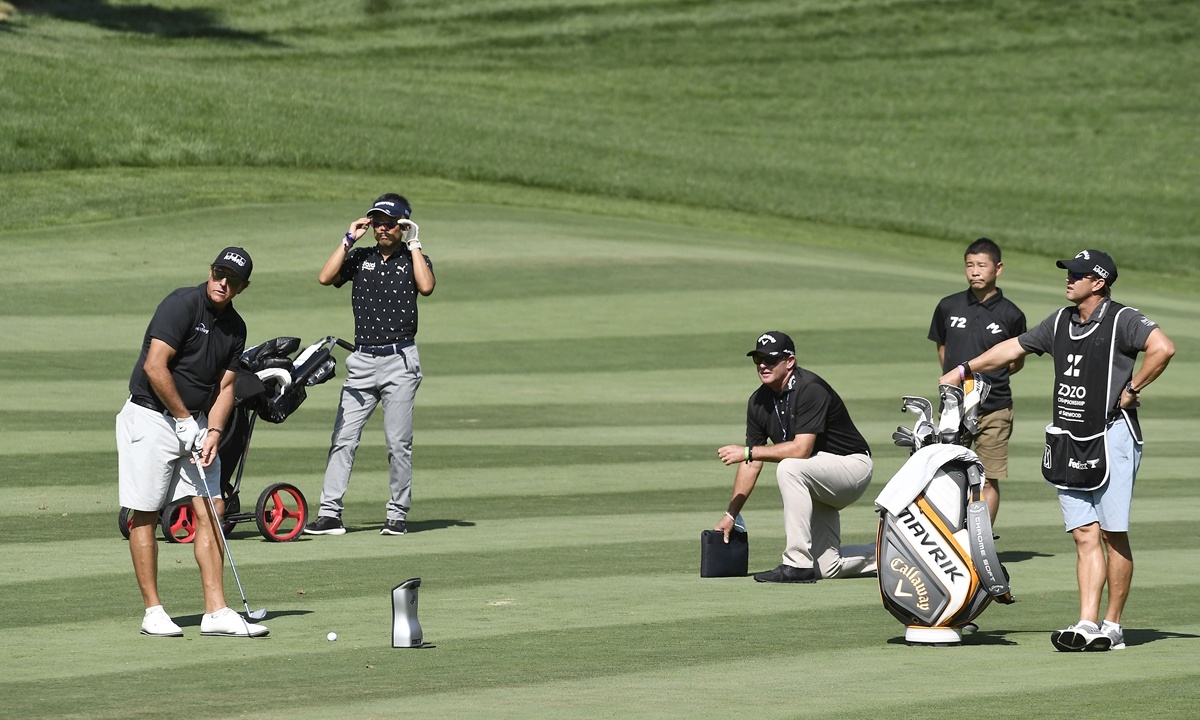 Phil Mickelson prepares to hit from the 14th fairway during the pro-am ahead of the Zozo Championships on Wednesday in Thousand Oaks, California. (Photo: VCG)

Five-time major winner Phil Mickelson, also known as "Lefty," said Wednesday he worries about the US PGA Tour allowing spectators at an event the week before the Masters and might skip it for a 50-and-over tournament.

The 50-year-old American left-hander, a three-time winner of the green jacket, expressed support for the tour's COVID-19 precautions.

But he worried about the extra risk of allowing a limited crowd of 2,000 people at the Houston Open only days before players are due to arrive at Augusta National.

"The PGA Tour has done an incredible job of getting the players to play and compete in a safe environment," Mickelson said. "I think they've done a phenomenal job of having us feel safe. I think they will do a very good, safe job in having 2,000 people at the Houston Open.

"However, for me personally, I don't like the risk of having that happen the week before the Masters.

"I just feel like the week before the Masters, that's a big tournament we have and I just don't want to have any risk heading in there. So it has made me question whether or not I'll play there."

Mickelson, who last weekend won his second title of the year on the 50-and-over Champions Tour, said he might skip Houston for a Champions event in Phoenix the same week as his final tuneup for the Masters, which tees off on November 12 after being postponed from April by the pandemic.

Mickelson has already been taking extra precautions to avoid the ­virus before the Masters and dislikes a new variable debuting a week before a major championship.

"I have to give the tour a lot of credit and confidence in the way that they've handled the entire year and I'm sure they're going to do a great job at keeping the players safe in that [Houston] environment," Mickelson said.

"But because I haven't seen it before, because it's the first one out on the tour with some people, I'm unsure and I don't want to take any unnecessary risks.

"I don't go out to dinner. I don't go out and socialize because I want to make sure that I have an opportunity to compete in the Masters."

Even the possibility of a false positive test worries Mickelson.

"Everybody has been safe, so we've all made those precautions," he said. "But the false positive is the thing that scares me."