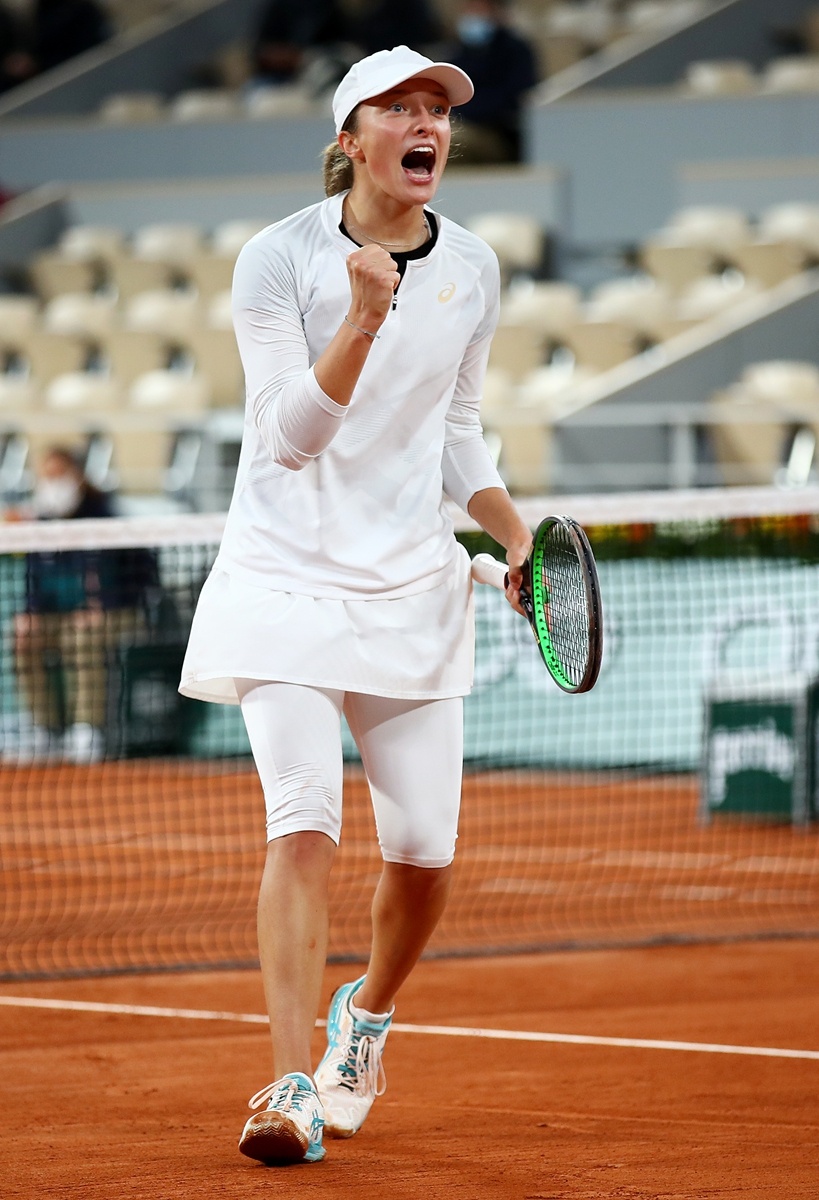 Iga Swiatek of Poland celebrates a point in the women's singles final of the French Open at Roland Garros on Saturday in Paris. Photo: VCG

The 19-year-old Swiatek, at 54th the lowest-ranked woman to capture the Roland Garros title in the modern era, is the ninth first-time major champion in the past 14 Grand Slams.

"It had to be that another underdog won a Grand Slam in women's tennis. It is so often right now that it is crazy," said Swiatek, who captured her first tour title in the process.

"I don't know what's going on. It's overwhelming for me, it's crazy.

"Two years ago I won a junior Grand Slam [at Wimbledon] and now I'm here. It feels like such a short time."

Swiatek is the youngest women's French Open winner since Monica Seles lifted the trophy as an 18-year-old in 1992. She is the first teenage champion since Iva Majoli in 1997.

"It's crazy for me because I watched Rafael Nadal lift the trophy every year and now I'm in the same place," added Swiatek, the first woman to secure the title without losing a set since Justine Henin in 2007.

She eclipsed the run of compatriot Jadwiga ­Jedrzejowska - the most outstanding Polish player of the interwar period - who finished runner-up at Roland Garros in 1939.

Swiatek was only the second Polish woman to reach a Grand Slam final in the Open era after Agnieszka Radwanska at Wimbledon in 2012. She had never previously been beyond the last 16.

Swiatek called her French Open title "a life-changing experience" and said her biggest challenge would be to try to match the consistency of her hero, 12-time Roland Garros champion Nadal.

Australian Open champion Kenin, 21, fell short in her attempt to become the first woman to capture two Slams in the same year since ­Angelique Kerber in 2016.

"I just want to congratulate Iga on a great tournament and a great match. You played really well," said Kenin.

19-year-old rises to the challenge

Swiatek, whose only previous tour-level final came at Lugano last year, dispelled any initial fear of nerves as she won 12 of the first 15 points to surge 3-0 ahead.

However, Kenin has made a habit of fighting through tough situations in Paris and broke back when Swiatek served an untimely double fault allowing the American to level at 3-all.

Swiatek, who bludgeoned her way into the championship match, conceding just 23 games in six rounds, secured a precious hold before Kenin lost her serve for the second time.

Serving for the first set at 5-3, Swiatek dumped a tame backhand into the net on set point and Kenin immediately broke back, ripping a blistering backhand return.

Kenin's resilience has been a staple of her success but she cracked again to present Swiatek with two more set points at 4-5, promptly dragging a backhand wide to hand the Pole the opening set.

The sixth-ranked Kenin, who had never advanced as far as the quarterfinals on clay before this fortnight, broke to begin the second set.

But an undeterred Swiatek responded in the following game, smacking a backhand down the line to break once more before holding with ease to go 2-1 up.

Kenin subsequently called for a medical ­timeout to receive off-court treatment on her taped left thigh, but she could not slow the ­momentum of her opponent as Swiatek broke for a fifth time.

Swiatek won the next eight points to storm to the cusp of the title at 5-1, securing a historic triumph with a powerful cross-court forehand on her first match point.

"I was just mentally consistent. I just wanted to play aggressive as in previous rounds. It was really stressful for me so kind of hard," said Swiatek, who will rise to 17th on Monday.

"I don't know what made the difference. I won the match point and that is important enough."