SPORTS 'Premature' to talk about alternatives to virus-hit Super Rugby

'Premature' to talk about alternatives to virus-hit Super Rugby 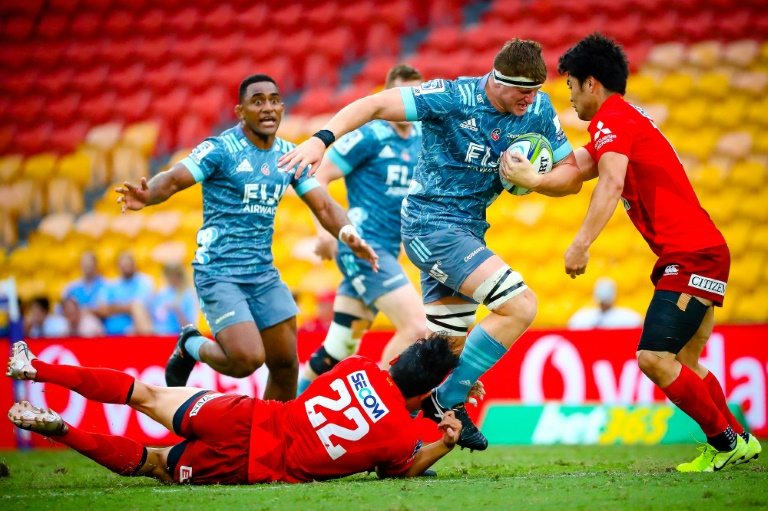 Canterbury Crusaders' Tom Sanders is tackled by Japan Sunwolves' Shogo Nakano and Keisuke Moriya (right) in front of a sparse crowd at Brisbane on Saturday, hours before the Super Rugby season was suspended. (Photo: AFP)

Super Rugby bosses said Sunday it would be "premature" to talk about alternative fixtures after the season was suspended because of the coronavirus, but they had already begun work to find a solution.

"It's a priority but it would be unrealistic to expect answers to those questions in say 48 hours," governing body SANZAAR chairman Brent Impey said.

The southern hemisphere club championship, which features 15 teams sprawled across five countries and 16 time zones, was halted after this weekend's round seven when New Zealand imposed travel restrictions from midnight Sunday that demand that all inbound travellers self-isolate for 14 days.

Impey told Radio sport it was "far too premature" to talk about other options, but the needs of the teams, sponsors, broadcasters and other associated industries such as caterers, cleaners and security staff all had to be taken into consideration.

"The whole eco-system, if you like, needs to be managed fairly carefully.

"It's incumbent on all of us, the broadcasters included, to work through the ramifications and come up with potential alternatives.

"The primary responsibility is to mitigate the damage and that's what we will be trying to do."

Champions Canterbury Crusaders were due to return to New Zealand from playing in Australia just hours before the new restrictions take effect and coach Scott Robertson said he was open to the idea of players being released to play at a grassroots, amateur level.

"If there's a pocket or a window for the guys to play, then sure," he said.

"We're waiting for what the rest of the competition looks like. Have we got three weeks or a month off? How are we going to keep the guys fit? Is it club rugby, is it internal, we're not sure."

The Crusaders lead the New Zealand conference and lie second on the overall table, a point behind South Africa's Coastal Sharks but with a game in hand.

Otago Highlanders, another of five New Zealand teams in the competition, will be victims of the new regulations.

Their match against the Argentina's Jaguares in Buenos Aires late Saturday was called off just hours before kick-off and they will have to be isolated for 14 days when they arrive back in New Zealand on Tuesday.