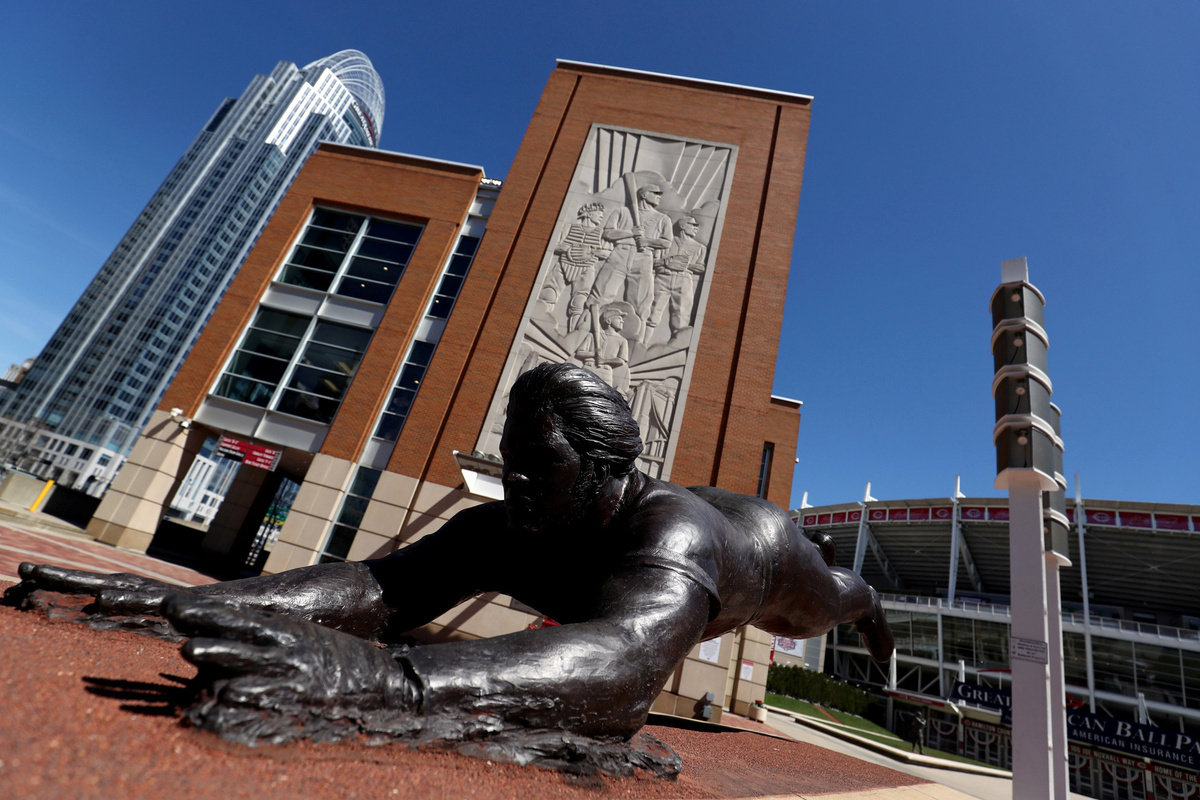 A view of the statue of former Reds player Pete Rose outside the ballpark during a preseason tour in honor of the 150th anniversary of the Cincinnati Reds at Great American Ball Park, Cincinnati, OH, US, Mar 27, 2019. [Photo/Agencies]

The 95 games Pete Rose played for the Montreal Expos (now Washington Nationals) barely rates as a footnote in the 24-year career of MLB's all-time hits leader, but new allegations by a former Expos groundskeeper have refocused the spotlight on April 13, 1984-the night the switch-hitting Rose became just the second player in MLB history to reach 4,000 hits, joining the immortal Ty Cobb.

Earlier this week former Olympic Stadium head groundskeeper Joe Jammer stated in an interview with the Montreal Gazette that Rose used corked bats in his lone season with the Expos, and that "he had been corking his bat for 20 years".

"Pete was too smart to deal with Expos equipment manager John Silverman (to cork his bats in the Expos' clubhouse)," Jammer told the Gazette. "So Bryan Greenberg, who worked in the visitors' clubhouse, did it. He took me into a small room. There was a door to the left, and underneath some tarps there was this machine."

Jammer recalled asking Greenberg what the machine was for, with the latter replying it was "for corking Pete Rose's bats".

"He said Rose had been corking his bats for 20 years, but that nobody checks them because he's just a singles hitter," Jammer stated.

Another former Expos employee quoted by the Gazette corroborated Jammer's claims after requesting anonymity: "Yeah, Greenberg did it all for Rose, but I didn't know it was in the visitors' clubhouse. I thought it was on a lathe in Greenberg's garage."

Greenberg declined to respond to Jammer's allegations, telling the Gazette: "I really can't talk about it."

Corking a bat, which is illegal, involves drilling a deep hole down into the barrel and replacing the extracted wood with cork, resulting in quicker swings, better timing and further hitting distance.

If the allegations are true, they would certainly change the optics of Rose's record 4,256 hits, if not remove him as MLB's official hits leader. He compiled that career number primarily with the Cincinnati Reds and Philadelphia Phillies.

In 1989 Rose was handed a lifetime ban from Organized Baseball by then-MLB commissioner A. Bartlett Giamatti for betting on games as both a player and manager, and two years later he was permanently banned from eligibility for the Baseball Hall of Fame.

In 2004, after years of public denials, Rose admitted that he bet on games while both a player and a manager.

When Harold Baines stepped into the batter's box for his 10th at-bat of the game on May 9, 1984, 752 pitches had been thrown over the course of two days at Chicago's Comiskey Park.

On the 753rd pitch, Baines ended the longest game in American League history with a home run into the center field bullpen, lifting the White Sox to a 25-inning 7-6 victory over the Milwaukee Brewers.

Baines had just one hit and two walks in his first 11 plate appearances of the game, which started on May 8 but was suspended after 18 innings due to the American League rule that stated that an inning could not begin after 1 am local time.

The next night, Baines' homer made a winner out of Tom Seaver, who pitched the top of the 25th and then started the regularly scheduled game-working 8.1 innings and picking up another victory.