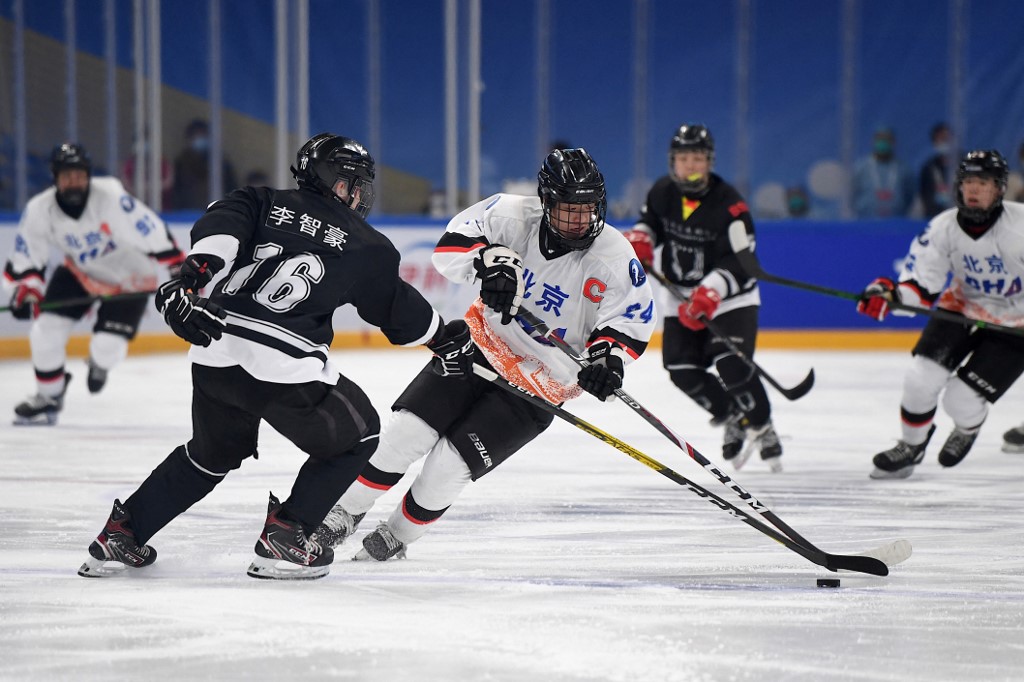 Members of the Chinese Ice Hockey Academy (in black) compete against members of the Beijing Youth team (in white) during an ice hockey test event for the 2022 Beijing Winter Olympic Games at the Wukesong Sports Centre in Beijing on April 5, 2021. (Photo: AFP)

Converting from a basketball arena to an ice hockey rink, Wukesong was more than ready to host the ice hockey events with great effort from all ice makers.

Moffatt admitted that he was a little bit scared before the testing program because he didn't know much about the ice makers and Zamboni drivers here in China, but now he is "very impressed with all of the people."

"There's some very good knowledge and good experience," Moffatt praised. "And for me, the most fun is working with people that want to learn and get better. So I get to do that. But I also get to share my experiences."

"I tell all of the ice makers that I do not know everything. I can learn from them, and they can learn for me. And we can make everybody just a little bit better," said Moffatt. "So to me, that's the best part."

Talking about the ice for the testing program, the Canadian looked proud and said, "It's very good. It's actually very good."

However, playing three games a day during the Olympics could bring huge pressure and workload on the ice-making team.

"You have to be much more prepared ahead of time that you have to work a little bit longer the nights before," Moffatt said. "You might have to build some ice to make sure you have enough for the three games."

"You won't have top quality conditions unless you prepare starting the night before and then very early in the morning. As long as you do that and prepare and have all your work done with enough ice built, and then it's really just kind of using your experience in between games."

"You just really have to think, plan and prepare," Moffatt added. "It's not something that you can just walk in the morning and go do it. That won't work."

Looking at the upcoming Beijing Winter Olympics, Moffatt seemed certain and driven. "We are always trying to strive to do the best we can."

"The Olympics are obviously the highest level in the world. We have the best athletes in the world. And hopefully, we'll have some of the best ice makers in the world here. And you know we will do our best to provide you know the top quality FOP (field of play) for them."